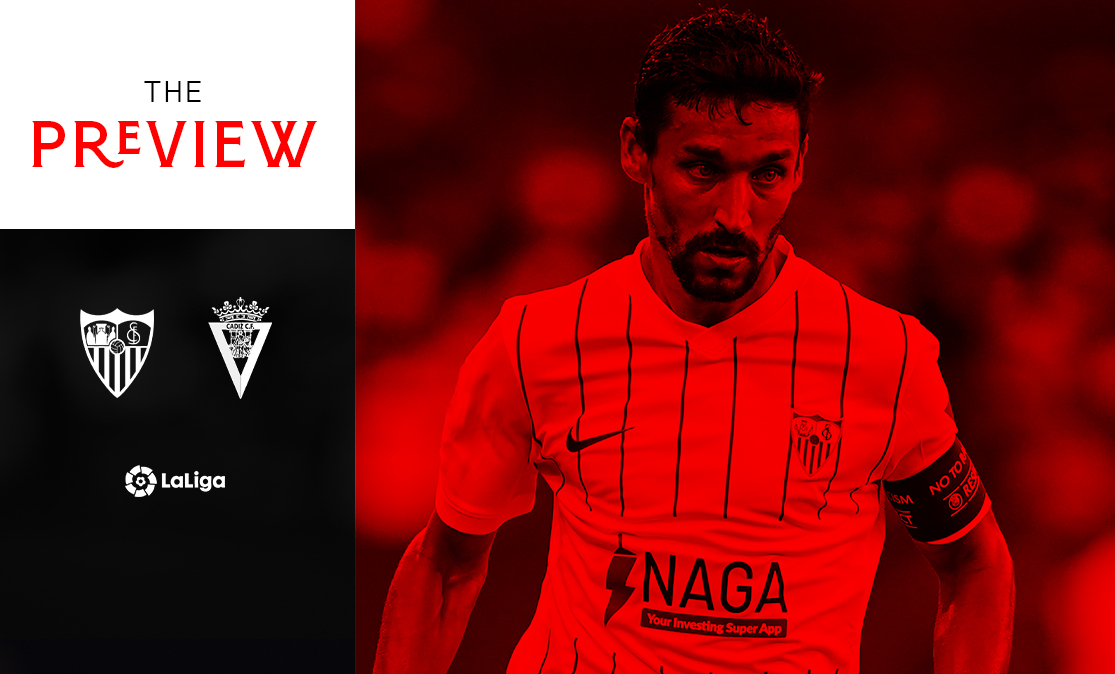 As the old saying goes: "The early bird catches the worm." That's what Sevilla FC will be banking on tonight as they open the thirty-fourth LaLiga Santander match day at home with the intention of applying as much pressure as possible on their fellow competitors for a place in the top four, with the exception of top spot, as it seems champions will be crowned in the next few hours. Our opponents for this evening are none other than Cádiz CF, Sergio González' new Cádiz, who after picking up a win in the Nou Camp only some days ago, continue dreaming of avoiding relegation that, not long ago, was seeming to be impossible. It will also be the last of the regional disputes of the season, rounding off an almost perfect record against the fellow Andalusian sides. There has only been one defeat up until now, the loss away to Granada, who were subsequently defeated in the Sánchez-Pizjuán. Sevilla have also managed to defeat Betis on both occasions and, of course, the reverse fixture was a success at the Nuevo Mirandilla.

After rediscovering their away form against Levante, Lopetegui's side are looking to secure a second consecutive win at this crucial stage of the season. Furthermore, of those in the chasing pack behind the leaders, only Barcelona, as well as Sevilla, have a home game this weekend. Just as Julen Lopetegui confirmed, Anthony Martial remains sidelined after picking up his injury against Real Madrid, whereas Tecatito, who had a niggle during the week, will be a doubt until the last minute. Rafa Mir, who picked his fifth booking of the season at Levante, will also be unavailable for selection. If they manage to see off Cádiz, the team will cement its place between the top three by the end of the weekend, but also keeping a close eye on what Barcelona do at the Nou Camp against Mallorca, Atlético at San Mamés and Betis, on Monday, at the Coliseum.

Rubén Alcaraz, one of the new notable January recruits, as well as Haroyan and Romanian, Florin Andon, are all unavailable for Sergio González. With that said, a possible three ex-Sevilla players could feature in the yellow's starting eleven, with Fede San Emeterio in midfield, Idrissi - on loan until the end of the season - on the left wing and Alvaro Negredo up top, alongside another veteran in Lucas Pérez. The two players who learnt their trade at the Ciudad Deportiva are Cala and Salvi will sit in the dugout, presumably. Although the fight to avoid relegation has tightened in the last few weeks, Cádiz find themselves just one point outside the relegation zone. Moreover, although at home they are the worst team in LaLiga, away from the old Ramón de Carranza they are performing much better; their away form would see them sit eleventh in the league table.

With addition the of tonight's game, it will see José María Sánchez Martínez take control of his twentieth Sevilla game and the sixth of the season where the Mercian referee has met Sevilla. Sánchez Martínez took charge of the victories at the Coliseum against Getafe, at home against Valencia, the loses at the Bernabéu and the Camp Nou and the home draw against Celta Vigo. Overall, nine wins, three draws and seven defeats whilst under his vigilance. On the other hand, Sánchez-Martínez has refereed Cádiz four times, half of those coming this season (a cup win against Albacete and a goalless draw in the league against Granada). The other two games were a win against Alavés last season and loss in the cup at Balaídos back in the 2015/16 campaign.