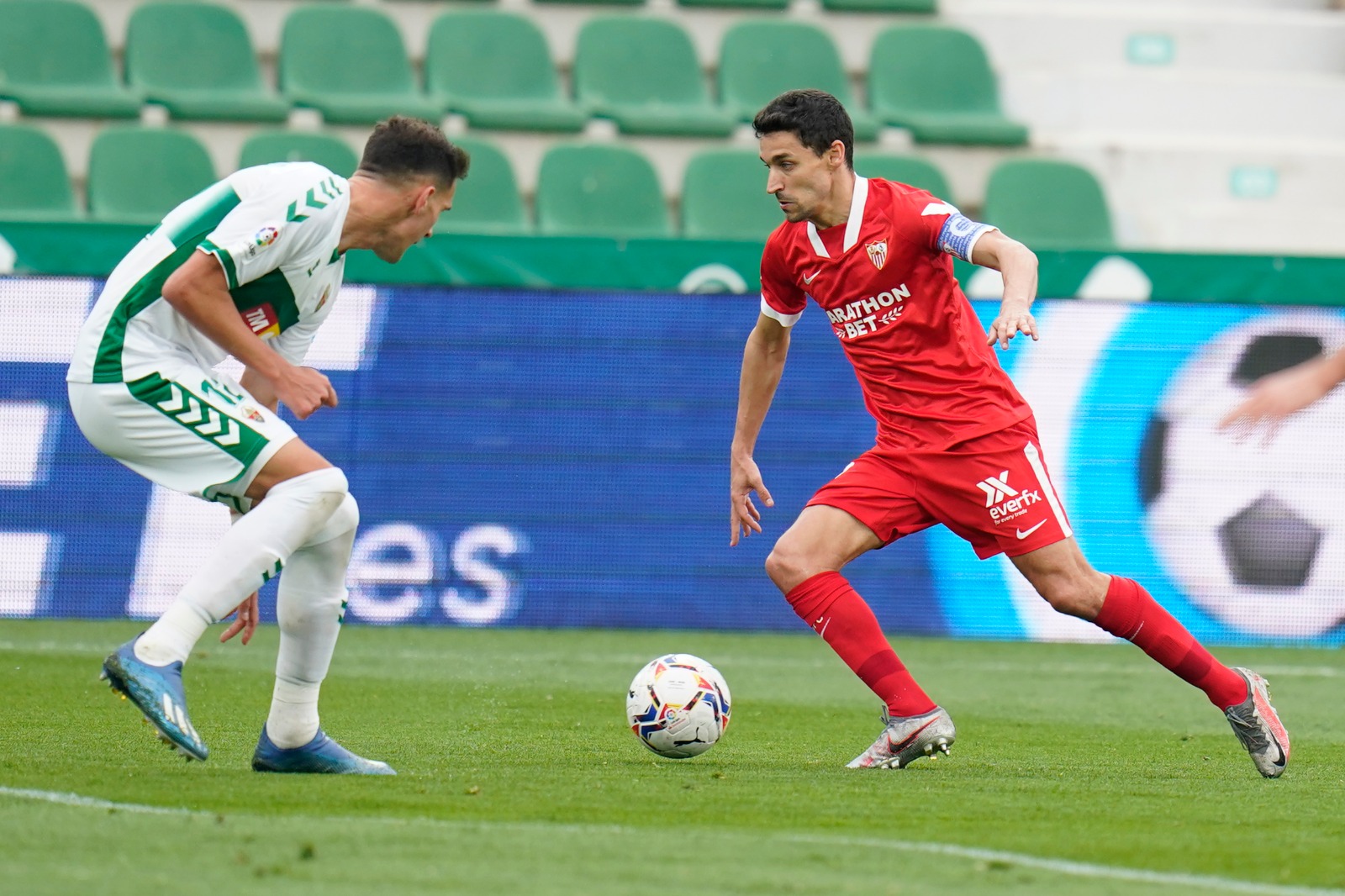 2-1: THE PAINFUL WEEK CONTINUES AT ELCHE

At this level, a lot can change in a week. Barely seven days ago, everything was going well, but Sevilla have been unable to win in any of their three matches since. After the gut-wrenching cup exit at the Camp Nou in midweek, Julen Lopetegui's side still have that bitter taste in their mouths after a defeat against Elche at the Martínez Valero, as the hosts scored two goals in quick succession late in the second half. Boyé and Carrillo scored for the hosts before Sevilla responded with a header from De Jong, but the visitors could not find an all-important second goal.

It was an overcast afternoon in Elche, and it seemed that the weather influenced the play. There was little space at all during the first half and chances were few and far between. Julen Lopetegui made sweeping changes to his line-up, with only Vaclík and De Jong retaining their places from Wednesday night. Fran Escribá's Elche opted to keep their lines in order and tried to break on the counter attack, a tactic which provided them with their first chance midway through the first half. It was a cross from the left-hand side which Guido Carrillo headed towards goal.

Chances were few and far between in the first half

Although Vaclík was well-positioned, Rekik opted to clear the ball for a corner and took no chances. Sevilla responded quickly and then had their only chance of the half. Escudero took a free-kick near the corner flag, and he tried his luck with a powerful effort, but Carrillo got a head to the ball and kept the scores level. The visitors had possession of the ball and tried to find space, but were unable to trouble the Elche rearguard. Raúl Guti also had a chance from the edge of the area after Sergi Gómez cleared another cross. There was a lack of intensity during the match as the referee blew for half time.

The second half continued in the same manner, with a lack of pace, but Sevilla began to create more chances, with a good shot from Munir taking a deflection off Barragán, which Badía had to tip wide for a corner. Elche had the biggest chance of the match moments later, as a poor piece of control from Munir gave Lucas Boyé a one-on-one chance with Vaclík. However, the Czech international was off his line quickly and made a crucial stop. Lopetegui then made a triple change, with Óliver and Jordán coming on in the middle of the park and Acuña replacing Escudero at left back.

Elche scored twice in four minutes, and there was no time for the visitors to react

The game was still level, and Julen Lopetegui continued to make changes, with Suso coming on for Jesús Navas, but the Elche opener would arrive just seconds later, with an unmarked Raúl Guti hammering home a cross from the left beyond Vaclík, who had just been involved in an collision with Boyé a few minutes before. Everything was going against Sevilla on a difficult afternoon for the visitors. Before the Nervionenses could truly respond, the hosts doubled their lead, with a Carrillo header going in off the right-hand post. Vaclík tried to clear it, but VAR ruled that the ball had crossed the line.

It was too much of a struggle for Sevilla at this point. However, they pushed for a goal and, after a few Óliver Torres effort, Luuk de Jong pulled a goal back. Acuña whipped in a cross from the left, with the Dutchman diving superbly to head the ball beyond Badía. That goal came just as the fourth official signalled five additional minutes, but the Blanquirrojos were unable to create any chances in injury time. A third consecutive defeat for the Nervionenses, who face two huge fixtures this week. Before Sunday's El Gran Derbi in Nervión, they face a trip to Dortmund in the Champions League, and will need to overturn a 3-2 deficit to progress to the quarter finals. It's time to bounce back.