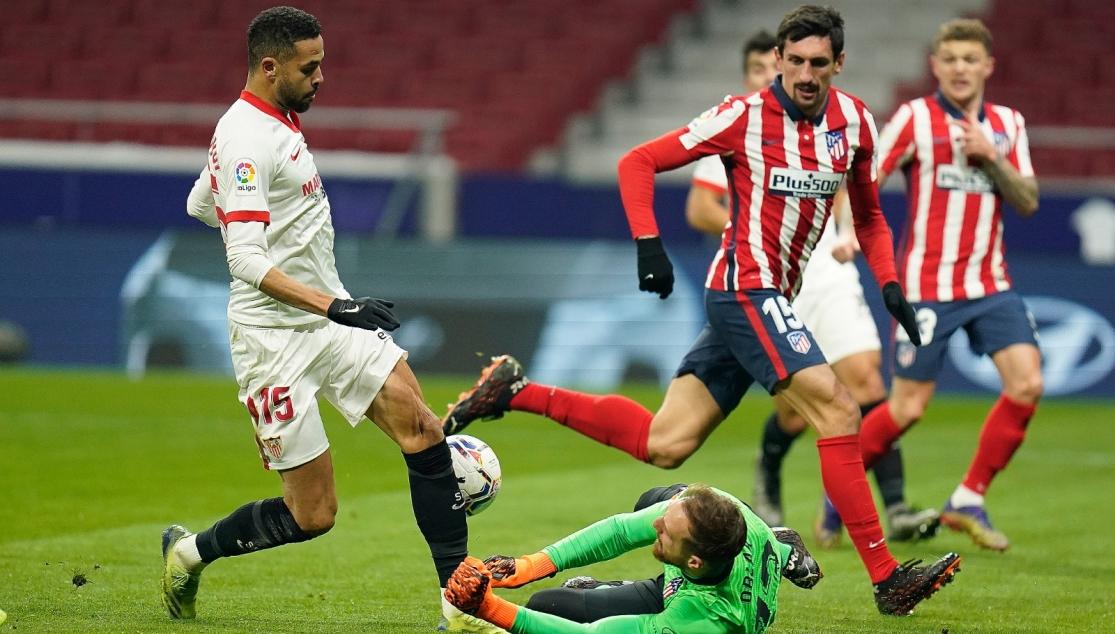 2-0: ATLÉTICO PLAY THEIR GAME PLAN TO PERFECTION AGAINST A DANGEROUS SEVILLA

The league leaders came out on top in a freezing Wanda Metropolitano in a match that was a lot more finely balanced than the scoreboard suggests, but Atlético's flawless defending and clinical finishing punished Sevilla with goals from Correa and Saúl

It is always a herculean task to come out on top against Atlético Madrid at home and tonight was no different. Sevilla gave it their all in an utterly freezing Madrid, with temperatures reaching -7ºC by the end of the game, but Atlético Madrid showed why they are top of the league even with numerous games in hand. While Sevilla started the game on top, and came out even better in the second half, none of their attacks - which lead to 12 corners - bore any fruit, while the few attacks of Diego Simeone's team were fatal. Correa struck in the first half and Saúl as the game was approaching its end, punishing Sevilla and not allowing them any reward for their strong performance.

Sevilla wanted to get warmed up quickly and went straight on the attack, pushing into Atlético's half and they had their first chance after three minutes. A Koundé knock-on found its way to Ivan Rakitić at the near post but the Croatian could not connect well with it and allowed Oblak an easier save than he might have expected. Atlético tried to break out into space but they could not get near Bono's goal. And when they did, it wasn't to send out just a warning. After 15 minutes of action, Lemar dribbled down the right, giving the ball to Trippier who pulled it back to Correa. The Argentine surprised everyone on the turn and shot with his left foot at Bono's near post, catching the goalkeeper off guard. Simeone's men found themselves 1-0 up without being the dominant team and it is no easy task to get back into a game against a winning Simeone side. Atlético dropped back with their traditional two tight lines and made it almost impossible for Sevilla to have chances.

Although Sevilla had the better start, Correa put Atlético in the lead

The Nervionenses only had one more chance in the first half, a well-constructed move that ended with a first-touch pass to En-Nesyri. The Moroccan could not arrive to the ball ahead of Oblak, but the Slovenian had to make a rushed clearance. The ball fell to Marcos Acuña who hit a first-time shot looking to catch everyone off guard and the ball whistled centimetres past the post. Luis Suárez responded shortly after with an acrobatic effort that forced Bono into an excellent save to deny Atlético a second. The game was barely 20 minutes old, but after that there were few chances in both areas. Sevilla preferred to keep control of the ball and tried to construct attacks down the right, but Simeone's side covered every space and made it extremely difficult for Sevilla to find a way back into the game.

The first action of the second half fell to Sevilla, with an inside pass from Koundé on the right wing that found En-Nesyri. The Moroccan hit a strong shot but Oblak was well positioned and could parry the ball away. The French centre-back was the secret weapon in attack for Sevilla at the start of the second half, as he pushed up and gave Atlético an extra problem to deal with. Sevilla continued to push higher and higher up and restricted Atlético access into the Sevilla half. Looking for more verticality, and on the hour mark, Lopetegui made his first change, bringing on Óscar Rodríguez for Joan Jordán.

Despite having Atlético on the ropes, Sevilla would concede a second on the counter attack

But, in a cruel twist of fate with only 15 minutes to go and Sevilla on the up, the hammer blow would arrive. A well-worked throw in freed Marcos Llorente down the right wing and the former Real Madrid player pulled it back to the edge of the D to Saúl who controlled the ball with composure and fired an impossible to save shot beyond Bono. Atlético's game plan had worked to perfection and Lopetegui reacted with more chances, bringing on De Jong and Óliver to go fully on the attack. En-Nesyri had a clear-cut chance in the 80th minute after a rebound from Óscar's shot, but the in-form striker unfortunately fired over. Sevilla did not give up and forced Atlético to compete until the very end. With the game coming to its end, Rakitić hit the post after a cross. Sevilla would have no reward for their performance against the league leaders in historic weather conditions.

It won't be long before the team travel to Madrid again. They will do so on Friday evening to play CD Leganés in the Round of 32 in the Copa del Rey. The defeat brings an end to Sevilla's unbeaten ran that stretched back to the 31 October against Athletic Club. The team's next match in La Liga is also away, this time against Alavés who have just sacked Pablo Machín.