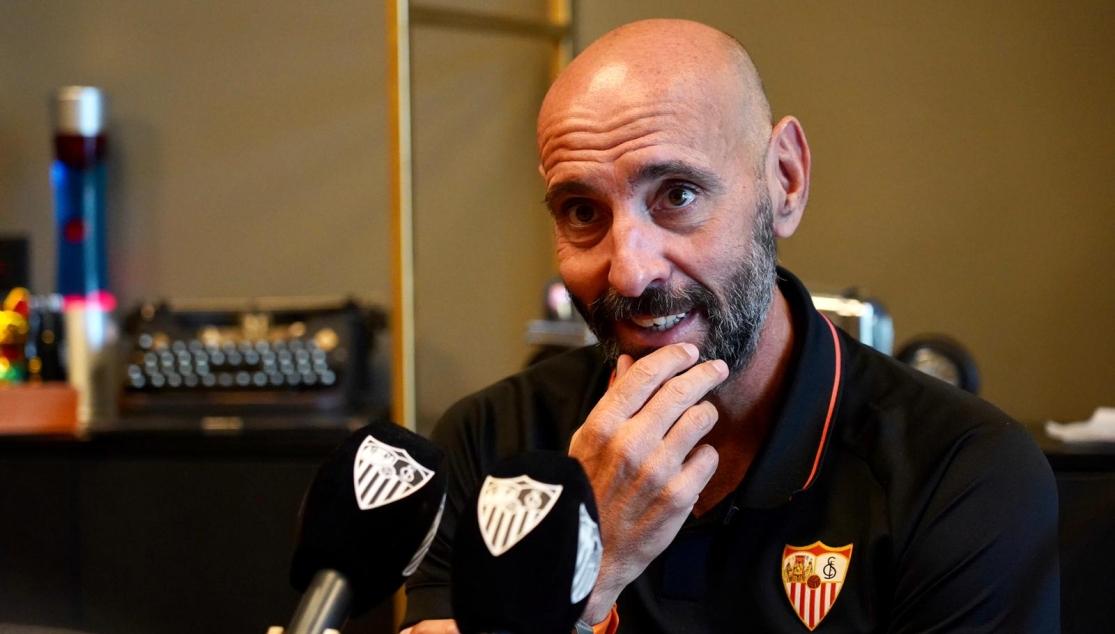 MONCHI: "YESTERDAY I DIDN'T NEED TO TALK TO THEM, THE GROUP HAS BEEN ABLE TO TURN EVERYTHING AROUND"

"Anyone who doesn't understand that people can get angry if we lose, doesn't know this club in the 21st century. At Sevilla, losing is always a crisis"

The General Sporting Director of Sevilla FC, Ramón Rodríguez Verdejo, Monchi spoke to the club's official media at midday today at the team hotel in Duisburg. In the interview, Monchi stressed that the team are going into the match in magnificent shape in all aspects, that the group has overcome everything throughout the year and that they are ready to keep making the fans happy in this competition.

Monchi began by saying that "there are a number of constraints and arguments that make it a key match. It's a one-off match, there's no turning back and it's a fundamental and necessary step to reach the final, which is where we want to be. After experiencing a bit of a difficult week, it's time to come together even more, if that's possible, within the group, and try to give us a joy, which we all deserve. The team is arriving at the right time for the game. They have shown once again what a magnificent group of people there are. The football will decide the match later, but in terms of motivation, enthusiasm and desire, we've come into this very well".

"We want people to be happy about what the team can achieve, it's another reason for all of us"

The General Sporting Director continued by stating that "this club and this team this year has grown a lot in the face of adversity and transforming problems into motivation. Yesterday I told them that it seemed that they had already experienced everything, and this week they had something else, which has served to strengthen the group and turn it around again, because they have always known how to take the positive with the coaching staff in charge. We want people to be happy about what the team can achieve, it has to be another reason for all of us".

Monchi admitted that "I've been less and less surprised by the group's response to everything. On every level it's magnificent, their commitment, work, involvement, etc. It has been a very complicated year to manage, I like being in the dressing room and being close, and it has been difficult in this aspect but they have made it very easy for us all. They have trained like real savages, overcoming the break with huge sacrifices during the whole year".

"The doubt about the goalkeeper comes from calmness, not from worry"

Monchi showed calmness when asked about the goalkeeper question for today's match: "I did not think it would be Vaclík's last match when he got injured. The doctor told us he was optimistic regarding the UEFA Europa League match. In any case, the calmness that Bono has given us has been crucial, he has had a magnificent end of the season. I don't know who is going to play, but the doubt comes from calmness, not from worry".

Speaking about tonight's opponents, AS Roma, the General Sporting Director admitted what is well-known by everyone, the great outfit that are facing Sevilla FC today: "They have many virtues, they're physical, they have quality players, a centre forward who is one of the best in Europe, etc. that's logically what concerns me".

"I would already give this group a very important grade, they have never let their guard down with everything they have experienced this year"

Demands as a way of life

"This club has installed itself in the elite and we have to learn to live with the demands. Anyone who doesn't understand that people can get angry and criticise us if we don't knock Roma out today, doesn't understand this club in the 21st century. So, we assume that, just as we are capable of creating excitement, we can create frustration that is directed at us. Even so, Sevilla FC fans are wise and understand everything well, but we do not have to be afraid of the defeat, but we have to assume that losing in Sevilla FC is a crisis. Whatever happens today, I would already give this group a very important grade, they have never let their guard down with everything they have experienced this year", he stated.

Monchi also added a clear motive to fight for this tournament: "Clearly, playing in this competition which has given us so much and has united us by moving around Europe, playing it like this without fans is tough for everyone, both for the fans and for us, because they always give us that strength. It's another reason, to make up for that absence by giving them the joy of being able to achieve something".

About the talk that the General Sporting Director normally gives to the squad before the match, Monchi stated that yesterday he thought he did not even need to give them one: "I'll tell you the truth, I almost didn't give it, because I saw them looking so well that I thought I could put my foot in it. It was a decision taken at the last minute, but they have come into this well, yesterday I didn't need to talk to them, the group has been able to turn everything around".

A recognisable side since preseason

"I've liked the fact that since we played the match against Reading at San José de la Rinconada, I've seen the same Sevilla, making mistakes, of course, but without ever losing their identity. The snapshot of the match against Reading and the one against Valencia was very similar. With variations, of course, but the manager has been capable of getting it right with these hallmarks", stated Monchi, on the team's identity this season.

"The people need to be calm, the team is there. If we lose, it will be because Roma have been better"

Finally, the man from San Fernando sent out an optimistic message to all the fans: "The people need to be calm because the team is there. If we lose, it will be because Roma have been better, but the team is there. In front of us there is a very good team, but we are calm because we will go out onto the pitch with the same excitement and hunger that every Sevillista has in their house. The team will go onto the pitch today being the mirror image of Sevillismo. The team, of course, is keen, they know what's at stake".