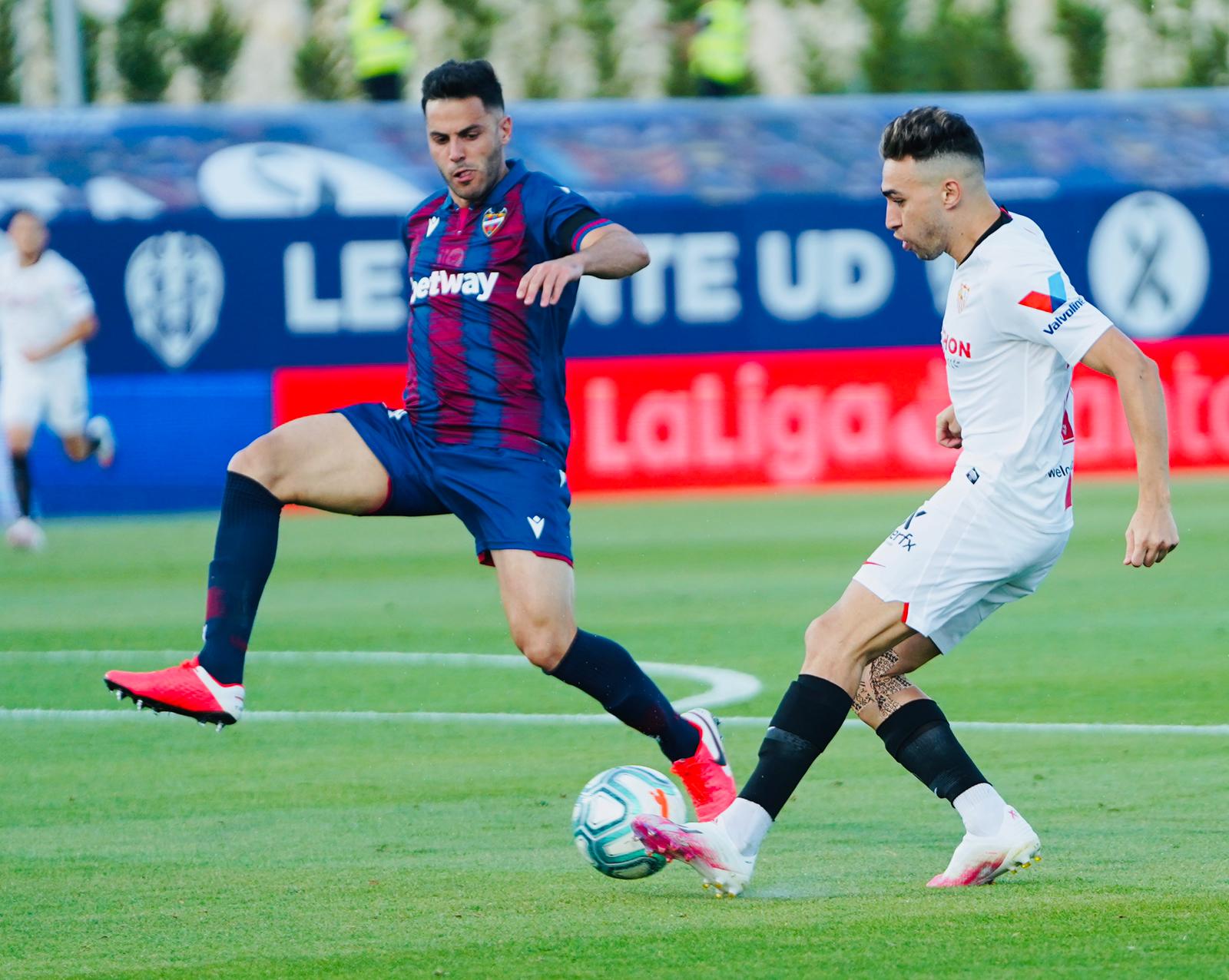 1-1: SEVILLA PAY THE PRICE FOR FAILING TO KILL THE GAME OFF

Entradilla
A point that feels like a defeat against a Levante side that were still alive towards the end of the game, and levelled with a fluke after De Jong's opener
Cuerpo Superior

Playing every three days means forgetting about the past very quickly. After the joy of last Thursday's derby win, it was a bittersweet feeling for Sevilla FC in La Nucía after conceding a late equaliser against Levante, a feeling of two points dropped. After the best possible start to the second half with a goal De Jong, a Diego Carlos own goal late on took the win away from the Nervionenses. Koundé had somehow made a crucial block just a minute before and Mayoral went close to scoring a stoppage-time winner for Levante.

Just like Thursday, Sevilla made it clear early one they wanted to take charge and dominate the ball. The quick pace of Lopetegui's football did not take long to appear, but Levante had the first shot on target of the match. Coke was played in, but Vaclík got a foot to his low effort to deny the ex-Sevillista. The visitors dominated and prowled Aitor's area, but their best chance also came from a set piece. Munir's free kick from out wide crashed off the crossbar as Aitor could only look on.

A goalless first half despite Sevilla's dominance

De Jong also had a chance from outside the area, but a slight deflection from the Levante defender diverted the ball straight into the arms of Aitor. Sevilla continued to dominated but Paco López's men were strong in their own half and did not allow the Nervionenses to break at speed. Navas and Ocampos continually tried to create chances down the right hand side, but their crosses well were defended by the side in claret and blue. Koundé went close from Banega's set piece, but he was unable to direct his header on target.

The second half could not have got off to a better start. Inside 25 seconds, a long ball forward from Diego Carlos down the left hand side was controlled well by Munir, whose cross was thumped home at the far post by De Jong. A delightful ball for the Dutch international, who gave Aitor no chance of saving his powerful close-range effort, and, after a wait for the VAR decision, put Sevilla in front. Diego Carlos then headed home a corner five minutes later, but Hernández Hernández disallowed his goal for a questionable foul on a Levante defender.

Levante began to move further forward and Lopetegui responded with a triple substitution on the hour mark. Suso brought extra energy on the right hand side, whilst Óliver Torres and Fernando shored up the midfield as the home side tried to make amends. En-Nesyri and Reguilón were also brought on as they tried to secure the three points, as Levante began to make inroads on the wings. A vicious long-range effort from Escudero tested Aitor with ten minutes remaining, but Levante began to have chances of their own. Hernani went closest in the 86th minute, beating Vaclík with a low effort which was miraculously blocked by Jules Koundé.

The hammer blow arrived a minute later, as Miramón's cross was tipped by Vaclík onto Diego Carlos, and the ball looped over the keeper and in. Levante nearly completed the turnaround in stoppage time, but Vaclík was at full stretch to tip Mayoral's effort round the post. A draw in the end which could have been so much for Sevilla. And on Friday, a clash against the league leaders Barcelona.