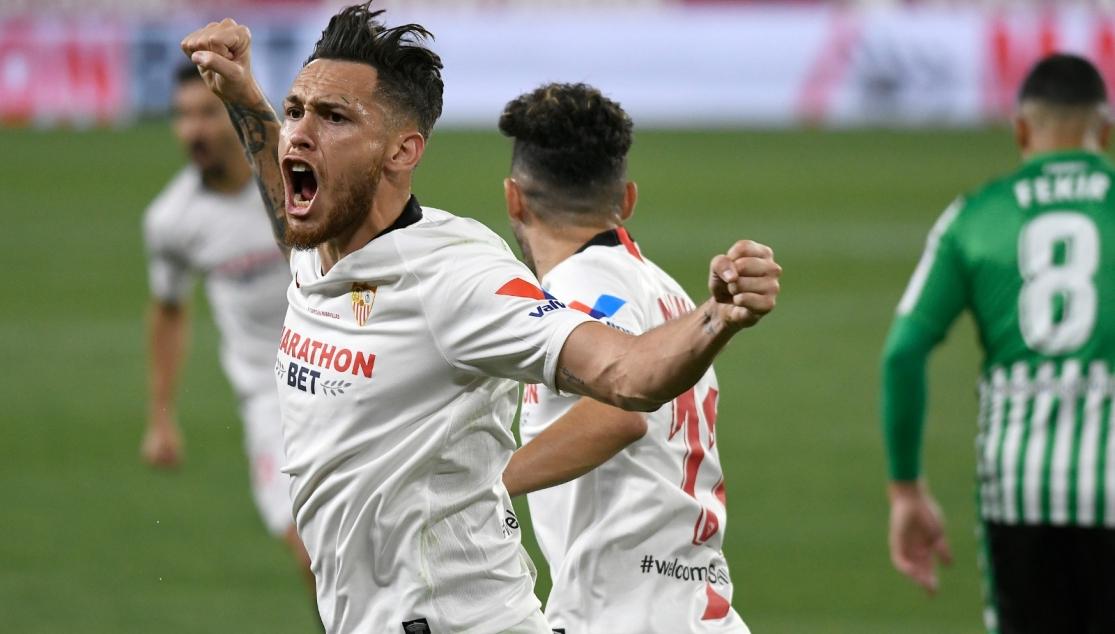 2-0: A SHOW OF STRENGTH AS SEVILLA DOMINATE EL GRAN DERBI

An assured victory for Sevilla in El Gran Derbi in the long-awaited return to action. Goals from Ocampos and Fernando have given Lopetegui's side breathing space in third place

Back To Win. That was LaLiga's slogan and that is exactly what Sevilla FC have set out to do since it was announced that the competition would return before September. After so many comments, so much conjecture and fast-paced preparation, it remained clear that, despite everything, the league table does not lie. Sevilla were by far the better side over the ninety minutes and they demonstrated that straight from the off. Ocampos opened the scoring from the spot and Fernando doubled the lead with a header five minutes later to seal another derby double.

Suspicions were confirmed as soon as the match got underway. This might not be football as we know it, but it was still the same fierce derby as always and there was no time to test that theory. Barely seven minutes into the encounter, Sevilla had their first chance, a powerful drive from Ocampos which cannoned off the woodwork. The Nervionenses were dominating, but the pace of the player, as expected, did not allow Lopetegui's men to catch by surprise their opponents, who tried to keep hold of the ball but without too much depth to their play.

The slower pace of the game early on did not allow Sevilla to surprise their opponents, despite their dominance

The best chances for Sevilla came midway through the first half, from set pieces. Koundé found himself unmarked at the near post from a corner, but headed wide. Lopetegui's men were taking the match to their opponents and De Jong also went close with a headed effort, but he was unable to find the target. Betis were unable to react and their only shot came from Canales, which was from a long, long way out and did not test Vaclík. Ocampos again went close, forcing Joel Robles into a save just before Mateu Lahoz blew for half time.

Sevilla did not let up after the break and showed that within just two minutes of the restart, as Jesús Navas sent a tempting ball into the box, but after the resulting pinball in the box, Munir's effort was too soft and was saved by Joel. There were no more warning shots for Betis, and the opener came in the next attack. De Jong leapt for the ball at a corner and was impeded by Bartra, and Mateu Lahoz blew without hesitation. Ocampos took the responsibility, and sent Joel the wrong way with a low, powerful penalty, the fifth consecutive LaLiga match in which he has scored.

Sevilla felt more comfortable now that they had taken the lead, as Betis were still unable to force Vaclík into any saves. The first goal came from a set piece, as did the second just six minutes later. Óliver's corner was flicked on by Ocampos's heel, and Fernando headed home with a real striker's header. A stunning goal to give Sevilla real breathing space over their city rivals. Lopetegui made all five subtitutions, bringing on Banega, En-Nesyri, Suso, Franco Vázquez and Escudero to freshen the side up, and, despite their efforts, Betis could not react whatsoever.

A massive result for Sevilla FC, who will now finish Matchday 28 in third place regardless of results elsewhere, as they have been for three months. However, the fixtures are coming thick and fast and there is barely any time to celebrate a special derby win. Sevilla's next match is on Monday, a trip to La Nucia to face Levante UD.