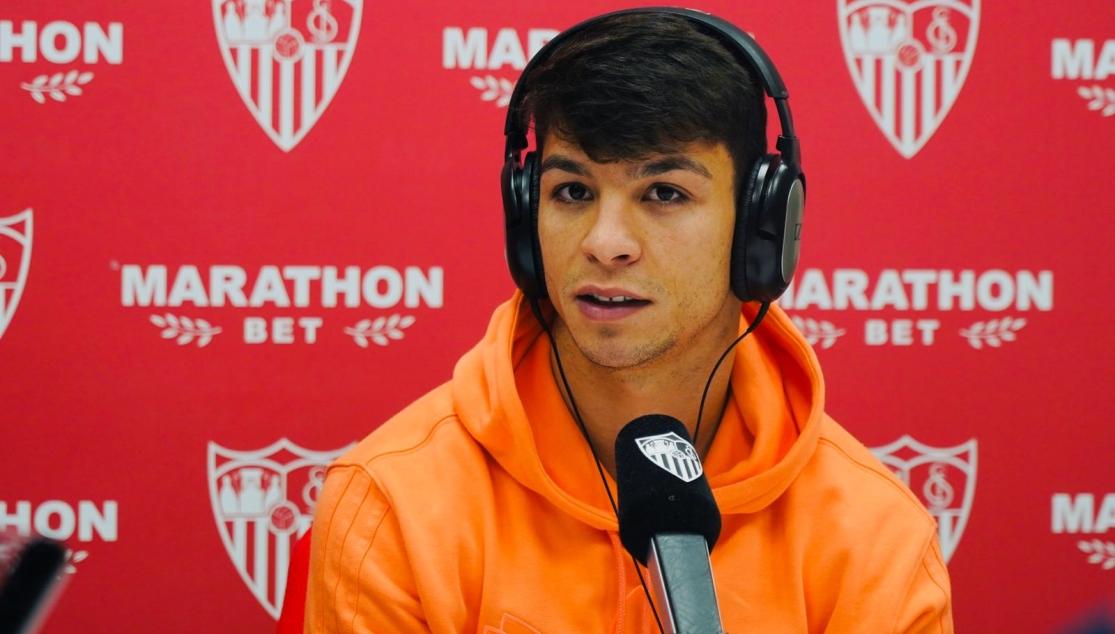 ÓLIVER TORRES: "WE HAVE TO RESPOND SO THAT THE FANS ARE EXCITED AGAIN"

"I'm not working towards being seen as the Banega replacement, but that people see Óliver as an important part of the team"

Óliver Torres, Sevilla FC midfielder, went to the SFC Radio and SFCTV studios this lunchtime to feature on the 'face to face' programme, becoming the fifth player to feature this season after Joan Jordán, Chicharito, Éver Banega and Fernando. Julen Lopetegui has also taken part since his arrival. The man from Extremadura began by talking about his injury: "I've had a niggle for a few weeks and I'm training little by little. I'm waiting for my comeback, I miss being with my teammates. It's worse being away and you miss the day-to-day aspect. I was in a good moment, I was feeling confident, in a good rhythm, everything was good. The main thing is, when I return, I come back just as I was and I can continue helping the team, which is the most important thing".

Óliver then mentioned the difficult run the team has faced: "You have rough patches in the season. Ours is now and it's good to identify that we're there, so we have to think about working hard to end that run, and the best way of doing that is at home to Espanyol on Sunday. Everything influences your work, obviously you work better after wins. The game against Mirandés was a tough moment, but we knew it was a difficult format. Casting that aside, we are where we wanted to be, fighting to qualify for the Champions League and we'll go into the final straight fighting for that".

"We're in the race for the Champions League, level with Atlético de Madrid. If we win on Sunday we'll be well placed"

"It's a crucial moment. Training is important, like everything at the club etc. We're responsible for what happens on the pitch and we have to give a positive and ambitious response, so that the fans are excited again. There's no better scenario for that than winning at home on Sunday. Getafe, Atlético de Madrid, Real Sociedad and Valencia are in that race and we're tied with Atlético de Madrid. If we win on Sunday we'll be well placed", added the central midfielder.

He also focused on the difficulty of the cup exit at Mirandés: "It's a tough moment, we did want to win the competition. But I don't think it has caused the rough patch, you would have to look more deeply into it. As much as you prepare for a match, as much as you want to play your best, football isn't maths, it doesn't come out how you like. You have to think about what you did badly last time, but making sure you do what you did well last time too. Until Mirandés, we were where we wanted to be, no one can say otherwise".

"Bad moments make you tougher. I know myself well, you have to have a good mentality, not just being in good shape"

Óliver left home at a very young age to play football so that he could achieve his dream of being a professional: "You mature, grow, make mistakes, learn... I've been away from home for a long time and everything helps you. Bad moments make you tough but you enjoy it less. Now I'm 25 I can say I know myself well. It's true that every week everything changes, you can be in a good spell but then everything fades. You have to have a good mentality, not just being in good shape".

"I was very comfortable in Porto but I needed a change and Sevilla was the ideal place; or, in fact, it was the only place I was considering leaving for. I wanted to come here because of the project, the manager who knew me, for what I had been told about the family-nature of the club, the city, the stadium, the fans - all these things that I had experienced as a rival. I wanted to experience them first-hand and it will make me feel privileged at the end of the day. At the end, it was either Sevilla or else I stayed. I signed on the dotted line without even knowing exactly what the contract was because, for me, the most important thing was that I knew that Sevilla wanted me to come. I still have a lot to show and a lot of improvements to make, and I think this is the best place for me to do that. Relationships are built on trust and this is what we had with Monchi".

As for his relationship with Julen Lopetegui, Óliver has always known him well and got on well with him: "I've known Julen since I was in the Spanish U18 squad. He's a coach that I love, and everytime that he's gone somewhere I've been delighted for him. He's a coach that knows me and he was a big factor in why I chose to come here. I thank him for his trust and I can only repay him by working hard".

"The news about Éver took us all by surprise. I want to thank him for the months that we've spent together, as I've learnt a lot. His demanding nature and high standards have made me better. I said just a short time ago that why would you go out to look for a replacement, whenever there are already good centre-midfielders here. If someone comes in, they'd have to come in to improve the team but also know that they're going to have to fight for their place. Any addition is always made welcome. I'll keep on working every day so the club don't see me as replaceable or even a substitute; but rather that Óliver is a vital component of the team. Besides, that's what I want it to be from now on".

The Sevilla FC number 21 finished off the interview by talking about the demands of the club, although he admits that as a footballer, you have to know how to deal with both the good and the bad moments: "For us, it's a good thing as it keeps us on our toes. We know that the demands at Sevilla FC are very high. We have to try and manage them both when things are going well, and when they're not. The important thing is what happens on the inside, to understand what the manager wants from us, and to be with each other. We have to shake off a bit of the weight we feel from the outside, so that we can play our own football how we want".