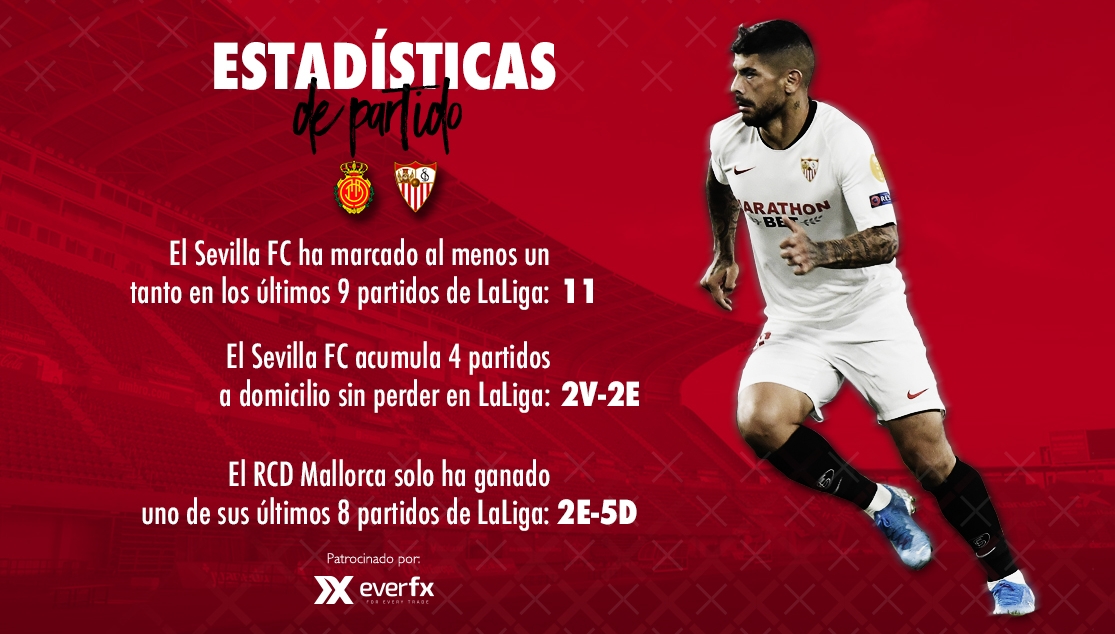 SEVILLA VISIT MALLORCA ONLY THINKING ABOUT THE THREE POINTS ON OFFER

Sevilla will be looking to cap off 2019 with 34 points, something which will be achieved is they win tomorrow at Son Moix

2019 is coming to a close for Sevilla FC. In what will be Matchday 18 in La Liga, Sevilla will visit RCD Mallorca in the San Moix Stadium, and will bring to a close this calendar year. Sevilla sit third in the league, with 31 points, as they visit Mallorca; however, they haven't tasted victory since the start of this month, when they beat CD Leganés at the Ramón Sánchez-Pizjuán. The draw in Pamplona was followed by defeat at home to Villarreal, and these both put a halt to the progress that the team was making. However, they now visit the capital of Palma to put those results behind them, and are firmly focused on getting all three points tomorrow.

As for the opposition, they welcome Sevilla FC in a complicated situation, but outside of the drop-zone. Vicente Moreno's men have got 15 points and find themselves in seventeenth position in the table, only one point above Celta. Mallorca have also not won a match since the 10th November, whenever they beat Villarreal. Since then, three defeats and a draw have followed in La Liga. Two days ago, they eliminated CD El Álamo in the Copa del Rey by 1-0 to progress to the next round.

If Sevilla were to win tomorrow, it would be their third win in their last five away outings

Lopetegui's men will be looking to continue their good away form in the league, as in their last four outings away from home, they've won eight points (two wins and two draws). If they were to win, it would be their tenth victory of the league season and would see them finish 2019 in third position, with 34 points. After tomorrow, they only have one game left to finish off the first half of the season: home to Athletic Club de Bilbao on Friday 3rd January 2020, 21.00.

Lopetegui warned in his press conference that the game will be extremely difficult, as they are coming up against a side who have "beaten sides such as Real Madrid and Villarreal at home". The home side will have to do without centre-back, Raíllo, tomorrow as he is serving a suspension. For Sevilla, Lopetegui has taken 20 players with him to Mallorca, but will be without Escudero, Dabbur and Chicharito.

The game will kick-off on Saturday 21st December at 13.00 at the Son Moix stadium. Jesús Gil Manzano will be the man in charge, whilst Del Cerro Grande will be looking after VAR.