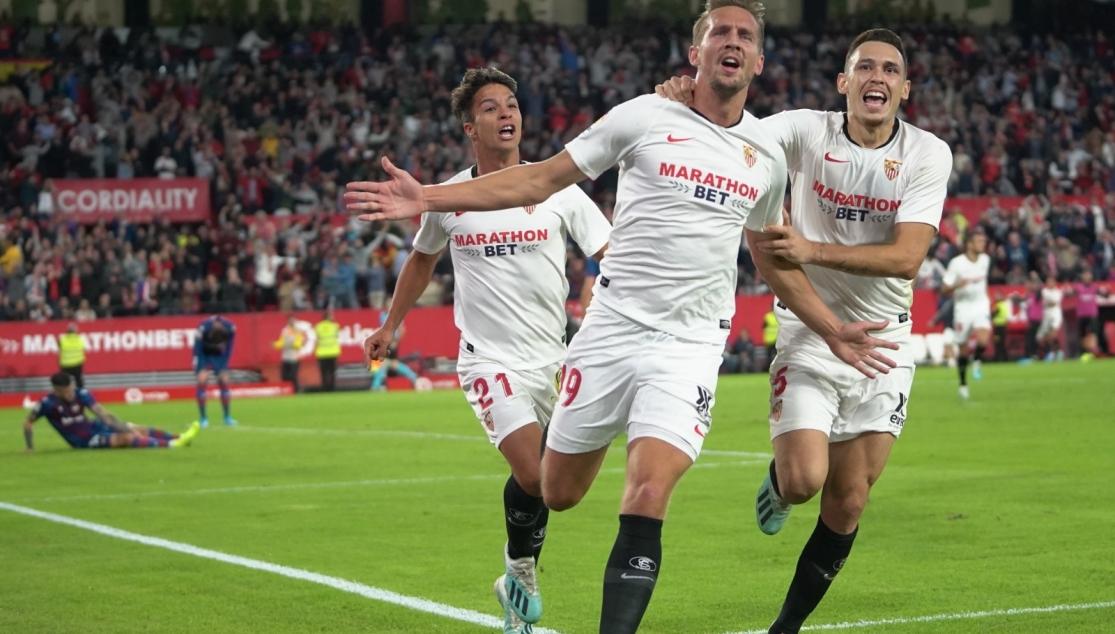 1-0: DE JONG COMES OFF THE BENCH TO GIVE SEVILLA ALL THREE POINTS

Sevilla tried everything, camping Levante in their own half all game. However, it took until the 88th minute when Navas' cross was coverted by De Jong and won Sevilla the game

A monumental and superhuman effort gave Sevilla FC all three points against Levante UD in Matchday 9 in La Liga, bringing them up to 16 points in total in the league. Sevilla had all kinds of chances; down the sides and through the middle. They were able to contain Levante to within their own half for almost the entire game. With just minutes remaining, De Jong scored and won it for Sevilla FC on a night which he won't forget in a hurry, as he eventually got off the mark as a Sevilla player.

It was a first half in which Sevilla FC should have gone been in front, but they weren't able to beat Aitor in the Levante goal. The Levante goalkeeper saved Sevilla's best chance on the half: a fierce left-footed strike by Reguilón from inside the 18 yard box, which forced the 'keeper into a spectacular stop. Although not spending a great deal of time in Sevilla's half, Levante also had a shot of their own through Vezo, who forced Vaclík into a save after a cross from Radoja.

Lopetegui's troops looked threatening down both wings, with Ocampos and Navas very active down the right-hand side and Reguilón down the left, with Nolito cutting inside whenever the left-back was bombing on. There were a lot of crosses put into the box, but to no avail as they failed to capitalise on their dominance under the lights at the Sánchez-Pizjuán. Banega, following up a rebound, nearly put his side ahead but his shot sailed over the bar. Chicharito put the Levante defense under relentless pressure and created a lot of space for his teammates. He also had a goal ruled out for offside just after the half-hour mark.

The second half started in similar vain to the first; with Sevilla FC dominating the ball in the opposition half and attacking down both flanks. Nolito, after receiving a through ball through the middle, could only find the gloves of Aitor as his shot was too central. The team persisted and persisted and were, without doubt, the dominant force in the game.

Sevilla didn't allow Levante out of their own half, but the goal seemed as if it would never come

Sevilla's players then started to become fatigued, and the siege that they had laid on Levante's goal early on began to die away. Lopetegui made changes to freshen the side up. Another chance came down from the right wing, when De Jong, who had just come off the bench, found space in the box after receiving a pass but his shot went over the bar.

Before being substituted, Chicharito had another two chances. The first, which was Sevilla's best chance of the game, came when Reguilón threaded a ball through for the Mexican, who found himself alone in the penalty area, but he couldn't find the target. Not long afterwards, De Jong whipped in a cross and Chicharito flicked it towards goal with his heel; but it didn't have the power to beat Aitor.

Finally, one of Navas' crosses was headed home by De Jong who wildly celebrated the winner with his teammates

In the end, Sevilla's persistence paid off. They were fully deserving of the three points which they eventually won, which they achieved when it looked as if they had ran out of steam. After being brought off the bench, Luuk de Jong ended his goal drought in the best way possible: heading home a Navas cross which was out of the reach of Aitor.

The points were richly deserved and have catapulted Sevilla back up the table. Attentions now turn to Thursday night's clash with Dudelange in their third match of the UEFA Europa League group stage.