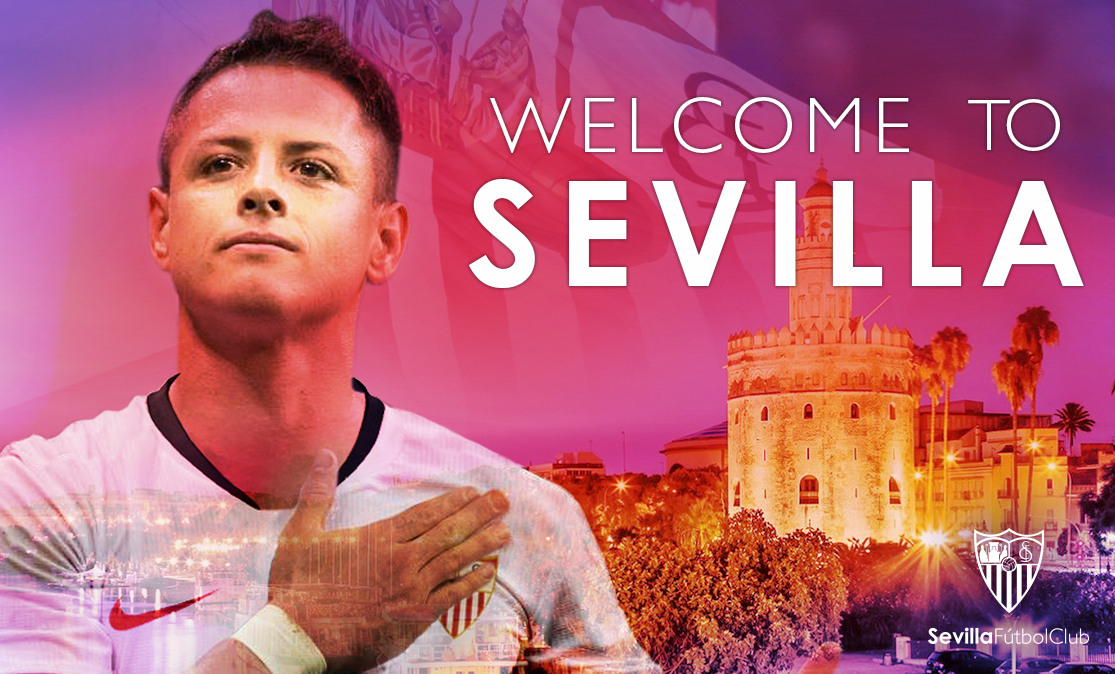 Entradilla
Mexico's all-time record goalscorer, at 31 years of age, will come to Sevilla to strengthen our forward line
Cuerpo Superior

Sevilla FC and West Ham United FC have reached an agreement for the transfer of Javier Hernández Balcázar, known in the footballing world as Chicharito, to join Sevilla. At 31 years of age, Chicharito is the all-time top scorer for his national team, Mexico, with 51 goals in 108 games. He has been called up by Mexico for the upcoming international fixtures where Mexico will play United States and Argentina.

Born in Guadalajara, his rise to the top began when he was in the youth teams at Club Deportivo Guadalajara, with whom he made his first team debut during the 2006/07 season, winning the Liga MX that year. He stayed at Guadalajara for another three seasons, establishing himself as a major part of the starting XI for the last two. In fact, in the 2009/10 season he finished as the league's top goalscorer. After that season, during the summer of 2010, he arrived on the big stage of Europe, as he was signed by Manchester United.

After impressing in Guadalajara, Manchester United signed him in the summer of 2010

In addition to becoming a revolution in his home country, Chicharito arrived at Old Trafford and made an instant impact, playing in 45 games in his first season; scoring 20 goals and making 5 assists. As a 'Red Devil' he won two Premier League titles - in 2010/11, and again in 2012/13 -, two Community Shields - 2011/12 and 2013/14 - and was a beaten finalist in the Champions League at Wembley, during the 2010/11 season; a tournament which was won by FC Barcelona.

On the transfer deadline day in the summer of 2014, Real Madrid announced the loan signing of Chicharito for the season. This season he finished with 9 goals, 5 assists and a Club World Cup. After his time in Madrid was over, he then moved on to the Bundesliga, and joined Bayer Leverkusen. The Mexican, stayed in Germany for two seasons, playing 76 official games and scoring 39 goals and making 9 assists.

After his two years at Leverkusen, he returned to the Premier League

After his good performances in Germany, he returned to the Premier League in the summer of 2017, signing for West Ham United where he has spent the last two seasons. With the London club he has played in 58 official games, scoring 16 times and assisting 4 times. Chicharito arrives in Nervión at 31 years of age, and has a clear aim to fight for a place in the forward line at Sevilla.

As the main focal point of the Mexican national team, Javier Hernández made his debut for the Under 20 side when they played in the U20 World Cup in Canada in 2007; making his debut for the first team in 2009. His biggest achievement for his country was winning the 'Gold Cup' in 2011, a tournament in which he was also the top goalscorer. He has played in the 2010, 2014 and 2018 World Cup finals, scoring 4 goals in the process. He is Mexico's all-time top goalscorer and is tenth on the list of Mexico's all-time appearance makers, and second out of players who are still playing.