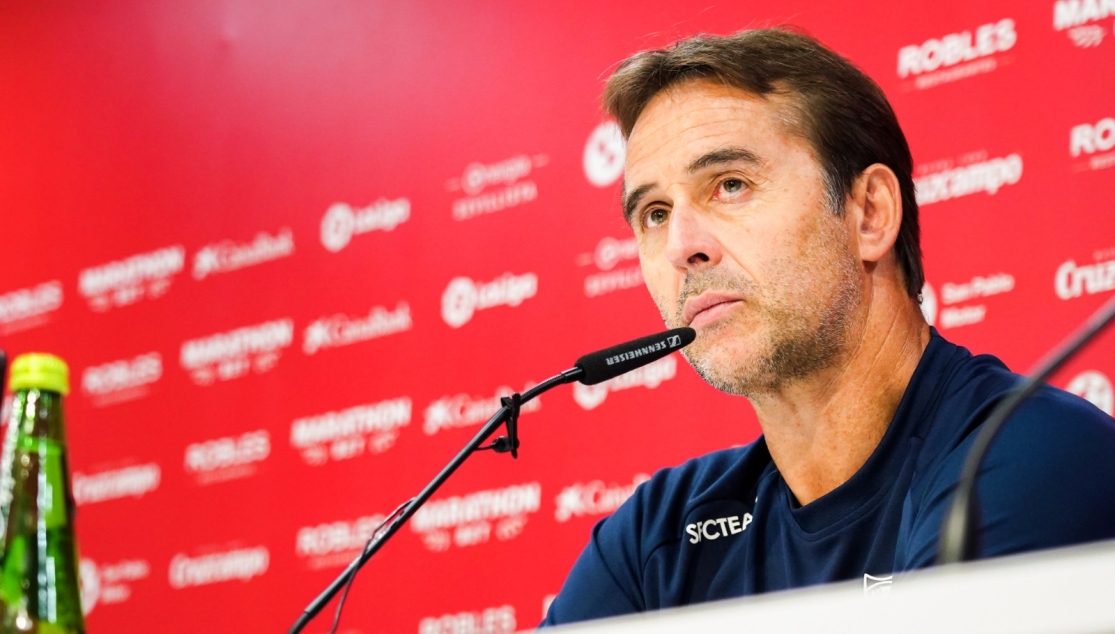 LOPETEGUI: "GRANADA ARE A TEAM WITH A STRONG SQUAD"

The coach knows he can rely on all of the squad he currently has, even though "there's no certainty over any player in any team" due to the transfer market remaining open until 2nd September

Julen Lopetegui began his official press conference, before the clash against Granada tomorrow, by explaining what his team have to do in order to get six points from six to start off the season: "To continue winning we have to do a lot of good things and we will try to compete against a very well organised team that have good players and that know how to attack and defend. We will have to be at our best if we want to win. They have a good set-up, good players and a lot of togetherness, with a very good manager and they started the season strongly with four goals in Villarreal and playing very well. The task ahead of us tomorrow is a big one".

Moving on to his own players, he was asked about the role of one of the scorers against Espanyol: "We never said that we didn't want Nolito, on the contrary. He made the most of his opportunity; and we haven't gifted to nor taken anything away from him. We try to be fair to everyone and if they have played it is because they have deserved to play, and they give us confidence - something which is reciprocated". Also, speaking on one player who is returning: "Banega is available for selection like everyone else, and tomorrow we will see what is the best eleven to take on Granada. They can all help us and they will all have to be ready to give the maximum effort to make it happen".

The absence of Dabbur for the first match was one of the main talking points: "When you do the squad list, you are always going to have to leave people out. We try to choose the people who are going to help us the most, but there is a lot of time left and we will count on him for sure. We are delighted with the work and the professionalism of Dabbur. In addition, we will try to find for him the best possible moments, just like we do for everyone. You are all putting the spotlight on the market and I am putting it on the team. Anything can happen in the market, with any player of any team, we are all at risk. It is the second league game tomorrow, there's still some time left and there's nothing settled on the 22nd August. Players can fit into any system and the good ones more so. We have played in different ways and he is our player. We have to choose, everyone is available and I hope that continues to be the case".

"There's nothing settled on the 22nd August. We have to choose, everyone is available and I hope that continues to be the case".

The coach wanted to remain cautious despite the good feelings and praise after the first game: "There's no reason for. We've got a 37-game marathon left and we've only run for a kilometre. We have to focus our efforts on each day as it comes. Granada is a difficult match and in football you can only focus on the short-term". He also gave his opinion on the threshold for red cards, which has been mentioned a lot over recent days: "This is football and there's so many scenarios. These stamps are part of the game. The rules can't go against the spirit of the game and we've got to be careful because there's a very fine line. We have to keep in mind whether it's intentional because you're trying to win the ball with your feet. We've got to avoid crossing the line because the row will always exist, and we have to know that going in fro a tackle on the heel or the calf results in a red card".

He responded to comments made by Roque Mesa in the press: "I told him personally what we thought and I'm certain that the club were clear too". He was also clear about Sergio Rico: "Everyone who is here can be picked, they're wanted here and we trust them, that's why they are here. Anything that could happen in the market is a question better suited for Monchi than myself, but that doesn't mean we don't trust Vaclík, Sergio and Javi. The market closes soon, but that doesn't mean that the one who doesn't play cannot have his options."