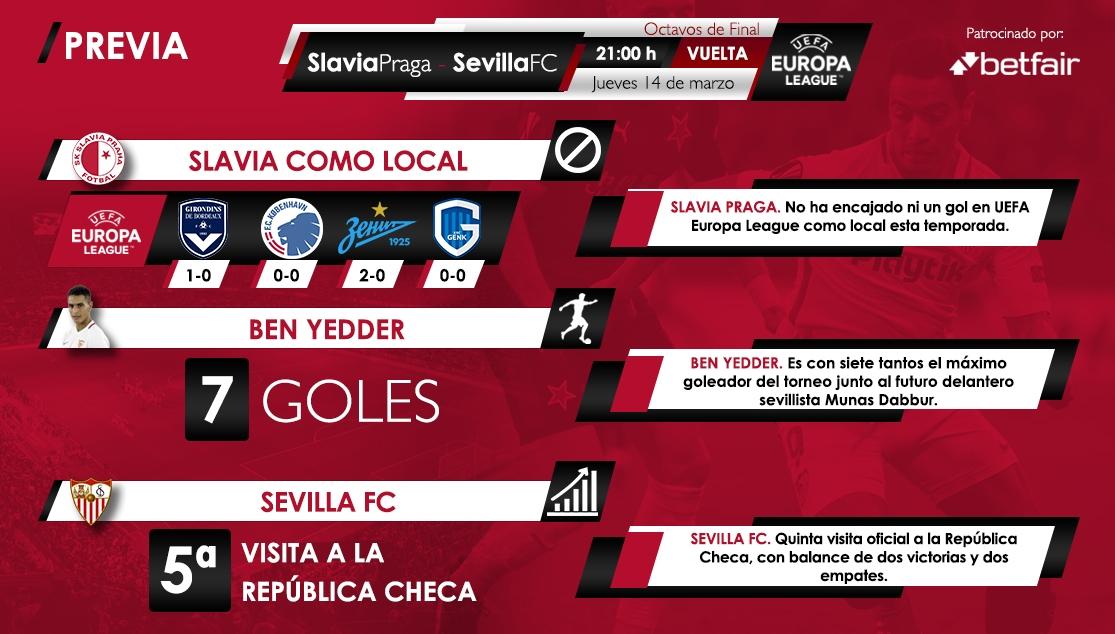 It is clear that Sevilla deserved a better result than the one they got in Nervión against Slavia Prague last Thursday. There were more than enough chances to have scored more than two goals and fortune evidently sided with the Czechs as they got two goals to bring back to Prague. However, Sevilla must adapt to the circumstances and win in the Eden Arena - the easiest path to securing qualification for the UEFA Europa League quarter-final. This is not a common occurrence for Sevilla - it has been five years since they last left Nervión without a win in a UEL knockout tie.

Betis was the last opponent that Sevilla stumbled against in the Europa League at home. That knockout tie would have to be resolved by scoring three goals in Heliópolis or by scoring two and face extra time that no one could have imagined how agonised it was going to be. If anything lit the fire for that historic night in the Villamarin it was the league match in between the two European derbies. The 4-1 rout of Real Valladolid in Nervión made people believe the comeback would be possible and instilled an optimism in the squad that wiped away the negative feelings from the first leg in a flash.

On this occasion, without the result in the first leg being as bad and acknowledging that a match against the eternal rival and Slavia Prague are very different, the burst of adrenaline in the league can be compared to that occasion. The 5-2 win against Real Sociedad seems to have liberated a team that showed their best side but who must show that the result against Imanol Alguacil's team was not just a flash in the pan. Furthermore, Slavia are unbeaten this season at home in the tournament, not even conceding against Bordeaux, Copenhagen, Zenit and Genk. Not breaking this run would mean saying goodbye to the dream of the sixth Europa League trophy.

And if there is one Sevillista that is being talked about before the match, it is Tomas Vaclík who was unfortunately unable to finish the game in Nervión against his compatriots last Thursday and who is being wrapped in cotton wool to be able to play tonight. Juan Soriano had to replace him on Sunday in the league, although the extra time has helped the former Basel goalkeeper in his recovery. Apart from that, Sevilla should not have too many changes on a night when European qualification is at stake, harking back memories to the last time against Krasnodar in December.

Slavia Prague may well be going through their best moment of the season. After the surprise against Genk, they came out of the Sánchez-Pizjuán with a positive result. Now it is time to seal that, although they know they will not have it easy against a Sevilla who never give up in their competition. With things going well in the Czech league after extending their lead over Viktoria Plzen to six points last Sunday, the Prague side will want to continue in Europe by causing an upset against the competition's kings.

It is true that Sevilla have never lost in the Czech Republic; however, only two of their four results in the country would be enough to secure qualification tonight. The two draws in Liberec would not be enough, but the 3-0 win against Slavia themselves in 2007 and 1-0 win this season in Olomouc would put Sevilla into the quarters. The referee will be the Belarussian Aleksei Kulbakov, who at 40 years-old is refereeing his fifteenth international game. He has only refereed Sevilla once before, two seasons ago in the Champions League group stage against Maribor when we won 3-0. This is his first time officiating Slavia.