Glory, missing for nearly six decades, has finally arrived…Sevilla FC were crowned champions after a convincing win over a tough Middlesbrough side, who adjusted their formation in the second half, playing with as many as four forwards. The change did not stop Sevilla from recording a resounding win

Sheer joy at the Philips Stadium. Sevilla didn’t falter. Not this time, just as they haven’t all season. Juande Ramos never turned his back on his philosophy, and the team never changed their image. Sevilla crushed a Middlesbrough side who were never really in the game. The Spaniards’ superiority was evident on the pitch and, most importantly, on the scoreboard.

First Luis Fabiano finished off a long ball from Dani Alves with a stunning header. Then in the latter stages of the match Maresca scored twice and Kanouté got a goal of his own. It was about time. 58 years with hundreds of thousands of fans having nothing to shout about. This was for them, for all those who stayed with us all the way, for all those who never said no to Sevilla. This is the reward.

There were a number of unknowns during the build-up to the final, including who would accompany Javier Saviola up front. The rest of the starting XI picked itself. Palop in goal. Dani Alves and David the two full-backs. Javi Navarro and Escudé at the centre of defence. Martí and Maresca in the middle of the park with Jesús Navas and Adriano on the flanks. And finally, Javier Saviola and Luis Fabiano were the front two. Once again Juande was brave. He didn’t see Kanouté as ready to play 90 minutes and had no hesitation in leaving him on the bench. 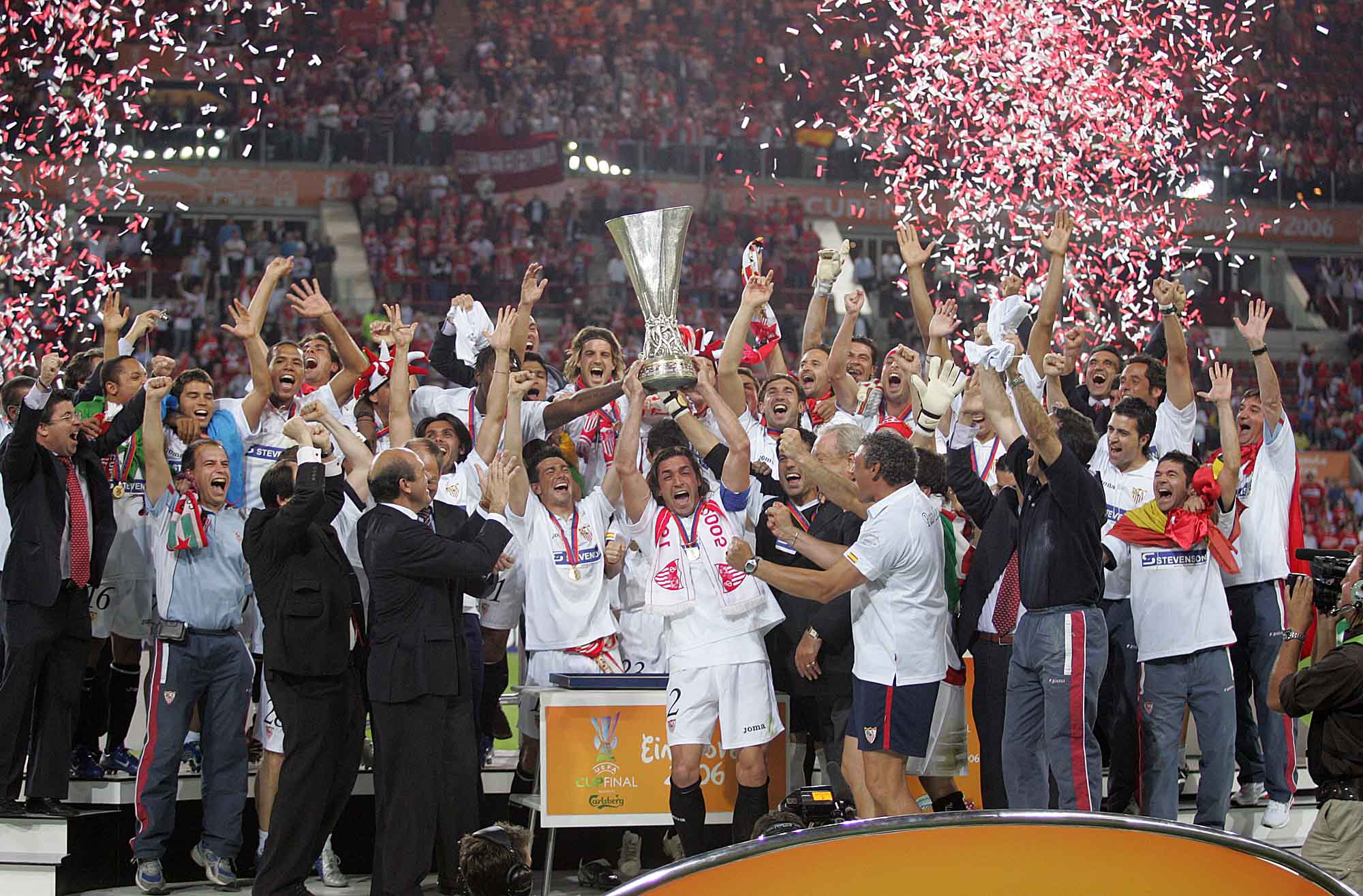 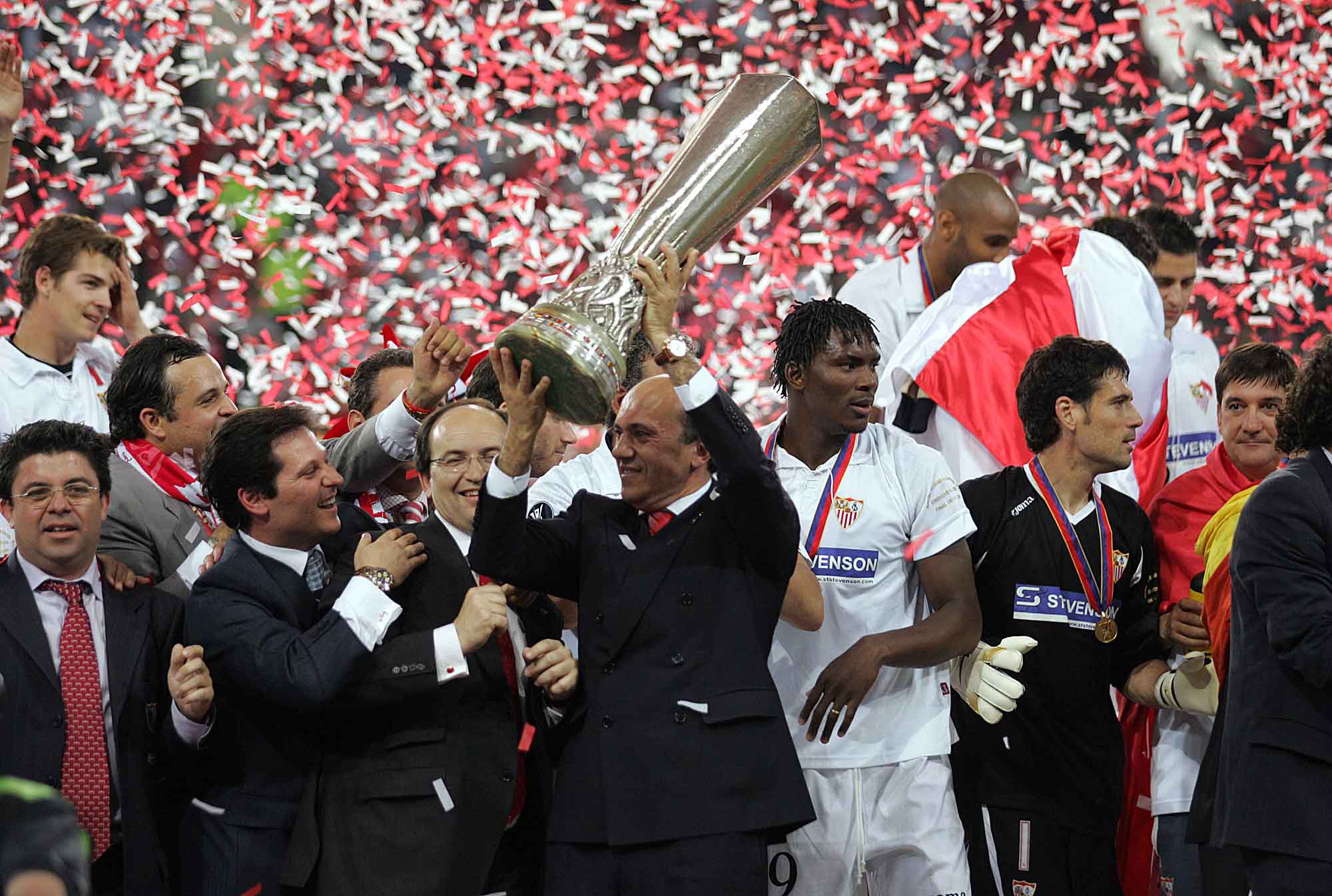 Over ten thousand Sevilla fans tirelessly cheered on their team in the lead up to the game. It had to be their night. In front of Sevilla was a team that, aside from the final score, were not going to make it easy. Middlesbrough played their best hand with an attack made up of Viduka and Hasselbaink. Their first choice goalkeeper, Mark Schwarzer, started in the end too, having been a doubt all week. They were joined by familiar faces like Fabio Rochemback and the speed and directness of their two young wingers, Morrison and Downing, the latter having been included in Sven Goran Eriksson’s England squad for the World Cup.

Sevilla started well. As early as the second minute Dani Alves took an excellent shot from outside the box that missed the right-hand post by a little over a metre. The Spaniards were clearly in control, managing to impose their style as they wanted to. That said, Boro weren’t wasting any time either, and in the fifth minute Andrés Palop was tested by a free-kick just outside the box. The Valencian cleared and Adriano sent his subsequent shot skywards. The match was being played at pace, and Adriano slipped through on the left-hand side to play an incisive ball which was cut out at the last moment by Riggot when Luis Fabiano was setting himself to shoot. Saviola then was on the end of a good ball on the edge of the six-yard box which got away. Two chances which are too good to miss in a final.

Sevilla were dominating though, remaining faithful to their own style as Juande had said they would be. Touch football against a team who were looking to be more direct. Boro contained Sevilla well, and the Spaniards had to work hard to create chances. That’s just what Dani Alves did in the 25th minute. His early cross towards the penalty spot found Luis Fabiano, whose spectacular thumping header found the net before Schwarzer could do anything to stop it.

Juande Ramos’s men believed. After half an hour Adriano went close with a superb effort from outside the box, and Sevilla didn’t take their foot off the gas by any means after getting the goal. They kept their faith in what they were doing, getting into good positions with ease but it wasn’t until the second half that their dominance began to be reflected in the scoreline.

The second half started with changes. Saviola made way for Kanouté while Macarrone replaced Morrison in an attacking change. Boro were now playing with three forwards and took the initiative. But Sevilla stood firm, and Adriano came close at the end of a dangerous counter attack. Middlesbrough created a chance of their own, and Viduka could only watch as Palop saved what looked to be a certain goal. The match was becoming increasingly end-to-end, which didn’t necessarily suit the Andalusians. Even so, Sevilla had the situation under control. They were the better side, and it showed.

The clock was running down, and Juande Ramos’s men were closing out the match. All the English could do was try to create something from a set piece, which perhaps explains why McClaren went for broke, throwing on another striker, Ayegbeni, in place of a defender. Ramos adjusted things too, reinforcing the midfield. Luis Fabiano made way for Renato, but it was the latter’s compatriot who came close in the 72nd minute, only to be denied by Schwarzer.

Shortly after, with just 15 minutes to go, Viduka was denied by Palop before Navas’s shot at the other end was kept out by Schwarzer. The Andalusians, despite the increasingly end-to-end nature of the game not suiting them, remained in control. They were the better team, and it showed.

But the second goal came before the 80 minute mark. Navas found Kanouté in the box whose first time shot was parried, with Maresca waiting to bury the rebound. Not long after Maresca got his second, this time from outside the box, before it was Kanouté’s turn to get in on the act, finishing well from inside the area.