Sevilla secure yet more glory in the UEFA Europa League, after a magical second half that saw a memorable comeback against Liverpool. Kévin Gameiro equalised before two goals from Coke secured a win that will go down in history. 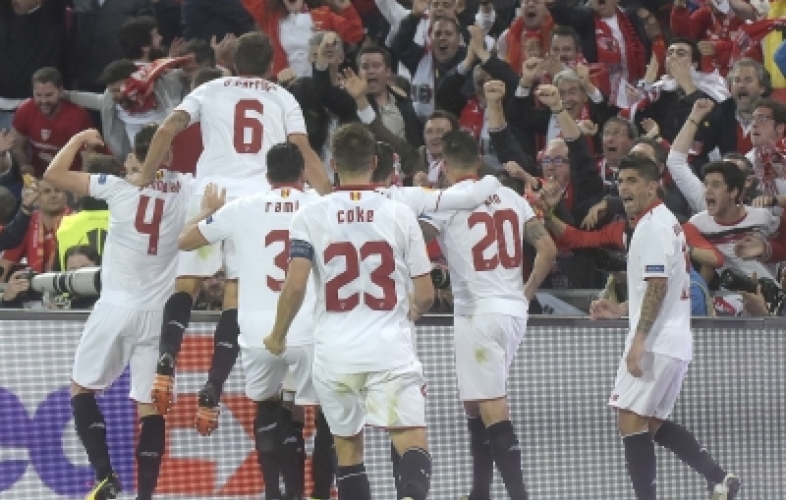 When it seemed like Sevilla supporters had seen it all, as though it were practically impossible to add further mystique to the never-ending legend that has been Sevilla in Europe, Unai Emery’s side did just that in an unforgettable night in Basel. It wasn’t just how Sevilla came back to win the trophy, but how they did it in the most marvellous way possible. Sevilla added yet more memories to their history of greatness in the UEFA Europa League. If it wasn’t pure happiness that was felt in Saint Jakob-Park, then it must be something pretty close to that. After a poor first half in which Liverpool went ahead and threatened to increase their lead, Sevilla were a rocket after the break and pulled one back just after the interval to leave Liverpool stunned. And it was easy, Sevilla simply imposed their fabulous Europa League form, that which has seen Sevilla crowned champions five times. It was outrageous, possibly the most outrageous win yet, from this Sevilla team that doesn’t want to stop winning.

As usually occurs in finals, the game started as a cagey affair with both teams wary of the other and keen to not fall victim to the psychological challenge that conceding first would present. As the teams sounded each other out, Liverpool came out on top with David Soria in Sevilla’s goal tested more than Simon Mignolet in Liverpool’s net. On 11 minutes Daniel Sturridge had the first chance, but his header was cleared acrobatically off the line by Daniel Carriço. Sevilla were handed a wake-up call and looked to find a foothold in the game.

Liverpool, without dominating, started strongly and had the better of the chances.

Sevilla dominated the game, but they were uncomfortable, shaky. Éver Benega looked dangerous and broke the lines a few times, but little was made of his influence in midfield. Liverpool, although they weren’t dominant, continued to look dangerous and were a yard faster than Unai Emery’s side. On 20 minutes, Soria did well to deny Philippe Coutinho. Sevilla had to wait until the 31st minute for their one and only chance of the first half, when Gameiro saw his remarkable overhead effort fizz just wide of the post after some good work from Coke in a corner routine. And Sevilla were soon made to pay when, just four minutes later, Sturridge cut in from the left flank and unleashed an unstoppable curling effort with the outside of his left foot that beat Soria all ends up and flew into the top corner.

And with Liverpool’s goal came a period of ten minutes which saw Jurgen Klopp’s side on top, with Roberto Firmino coming close to adding a second. Sevilla were happy to see half time come, and whatever Emery said to his side during the interval worked because just moments into the second half Mariano picked up Alberto Moreno’s misplaced pass and drove forward to the byline before crossing for Gameiro who hit home at the front post to equalise. Sevilla were in the ascendency and it was Gameiro who almost added a second just moments after scoring his first, but he put his effort just wide.

After a poor ten minutes, Sevilla came out for the second half a resurgent side and were soon level

Sevilla were now a different team. They were in top gear and soon left Liverpool crestfallen, unable to deal with Sevilla’s intensity. They were kept in their own half and Sevilla grew and grew, creating more and more chances. It wasn’t a case of if Sevilla would score again, it was when. Gameiro came close on 60 minutes, only to be denied by some impressive reflexes from Mignolet. But just four minutes later, Coke went one better when he capitalised on some good link up play between Vitolo and Banega to smash the ball into the far corner from the edge of the box for Sevilla’s second.

Liverpool offered little in reply and Sevilla were in control of the final, probing for a third goal. Emery’s side had Gameiro as their focal point and the France international caused a string of problems for Liverpool’s back line with his pace. But it was Coke who grabbed the third and winning goal when he evaded the offside trap to thunder the ball home unmarked at the back post. Total ecstasy.

Liverpool threw everything at the final few minutes as they looked for a way back into the game, but their efforts were in vain. Klopp’s men could not find a way to break down Sevilla’s impressive defensive line, and defence turned to attack as Los Nervionenses pressed for a fourth. The referee blew his whistle and Kolo, Iborra and Cristóforo started the party… Sevilla were deserving winners of the UEFA Europa League. Sevilla had done it again, this time more epically than ever, with a legendary second-half performance that left Liverpool stunned.

NOTES:Final of the UEFA Europa League 2015/16, played on May 18 in Basel at the Saint Jakob-Park stadium.