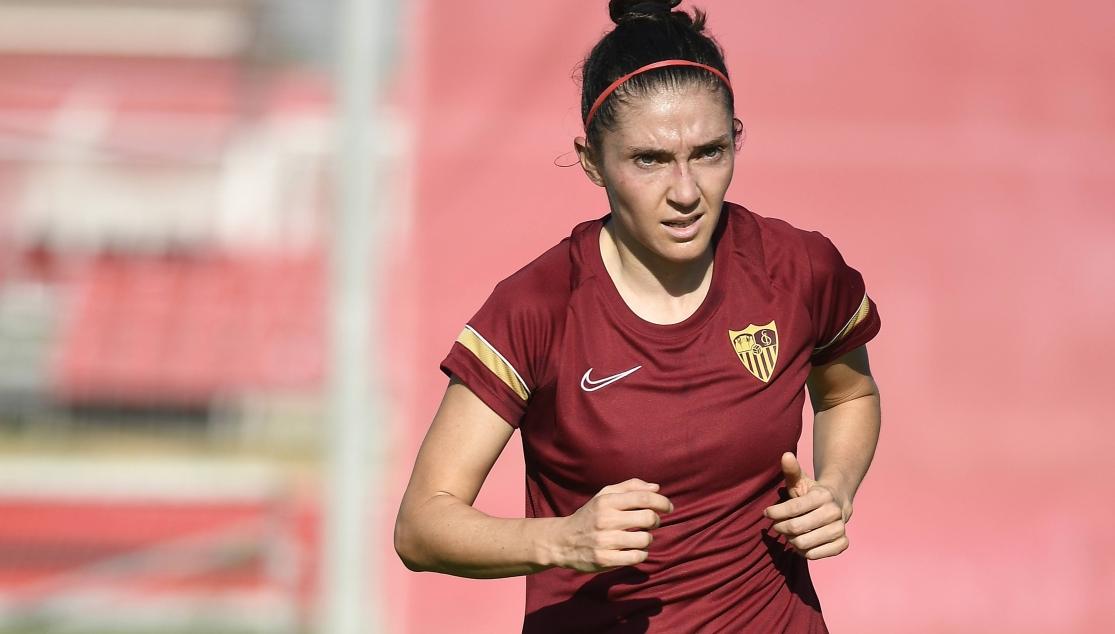 GAITÁN: GAITÁN: 'I CAN'T WAIT TO GET STARTED AGAIN AND ENJOY MY FOOTBALL AT SEVILLA'

The Colombian was open in her first preseason interview, and was eager to be the best version of herself as a player in an exciting squad

Natalia Gaitán spoke to the media on Friday after completing the first of two training sessions. It is the second season as a Sevilla FC player for the versatile Colombian footballer and she can't wait to get started after recovering from a bad injury. 'I feel good. After recovering well from a tough injury last year, it was important to rest well and I feel very good now. The last two weeks have been very positive, so I feel confident for the season ahead.'

She went on to talk about what the past year was like for her, where she had to be patient until she was able to gradually return to train with the team: 'Last season was difficult because I wasn't able to be with the team, but nonetheless, I was working hard individually to get back to playing on the pitch as soon as possible. I was able to join the team at the end of the season before having time off in the summer to rest.' With preseason training well underway now, Gaitán feels as if things are slowly returning back to normal for her. 'The most important thing is to take each day as it comes, come into work with a smile and to train and enjoy with your teammates because it's those small memories that stay with you. It's very important to appreciate what we have and know that things can change at any given moment as well as the internal competition with yourself to be the best version of yourself as a player in order to help the team.'

'It's very important to appreciate what we have and know that things can change at any given moment.'

When it came to discussing her return to training a few months ago, she claimed to have found herself as a player again: 'It was an amazing feeling to be able to train with the team again. My injury meant that I had to spend quite a lot of time alone, or only with Alba or Nazaret, as they were in the same situation. But to now be able to train with 20 other people is completely different and I can't wait to get started again and enjoy playing as a Sevilla FC player.' With regards to the upcoming season, which is just around the corner, Gaitán emphasised the importance to make the most of each day and to be in the best form for when the season starts: 'We're very excited. I had very big expectations of what the season would be like last year, but unfortunately, I couldn't be a part of it properly. However, I still have this hunger to succeed, and I'm focused on the work and on what we can improve in each training session to be successful this season. The season hasn't even begun yet, and I can't wait to get on that pitch again.'

As always, it has been a summer of departures and arrivals in the squad, and Gaitán is happy with the progress made before the season starts: 'It's another step in the right direction. We always want to improve on the previous season, and with the signings made this year, I think that we have a very competitive and strong team. However, it's important that we don't get complacent and each and every one of us has to fight with everything that we have to bring success to this team. She also touched upon the team's objective to continue improving: 'The objective is always the same: to improve on what was achieved last season. It's a very competitive league, every game is a battle and teams around us continue improving too, which means that we can't take any game for granted.'

Gaitán concluded by speaking about the team's objectives once more, but this time on a more personal level: 'I simply just want to get back to my best so I can help the team in any way. I want to continue improving on a daily basis and enjoy myself with this team.'