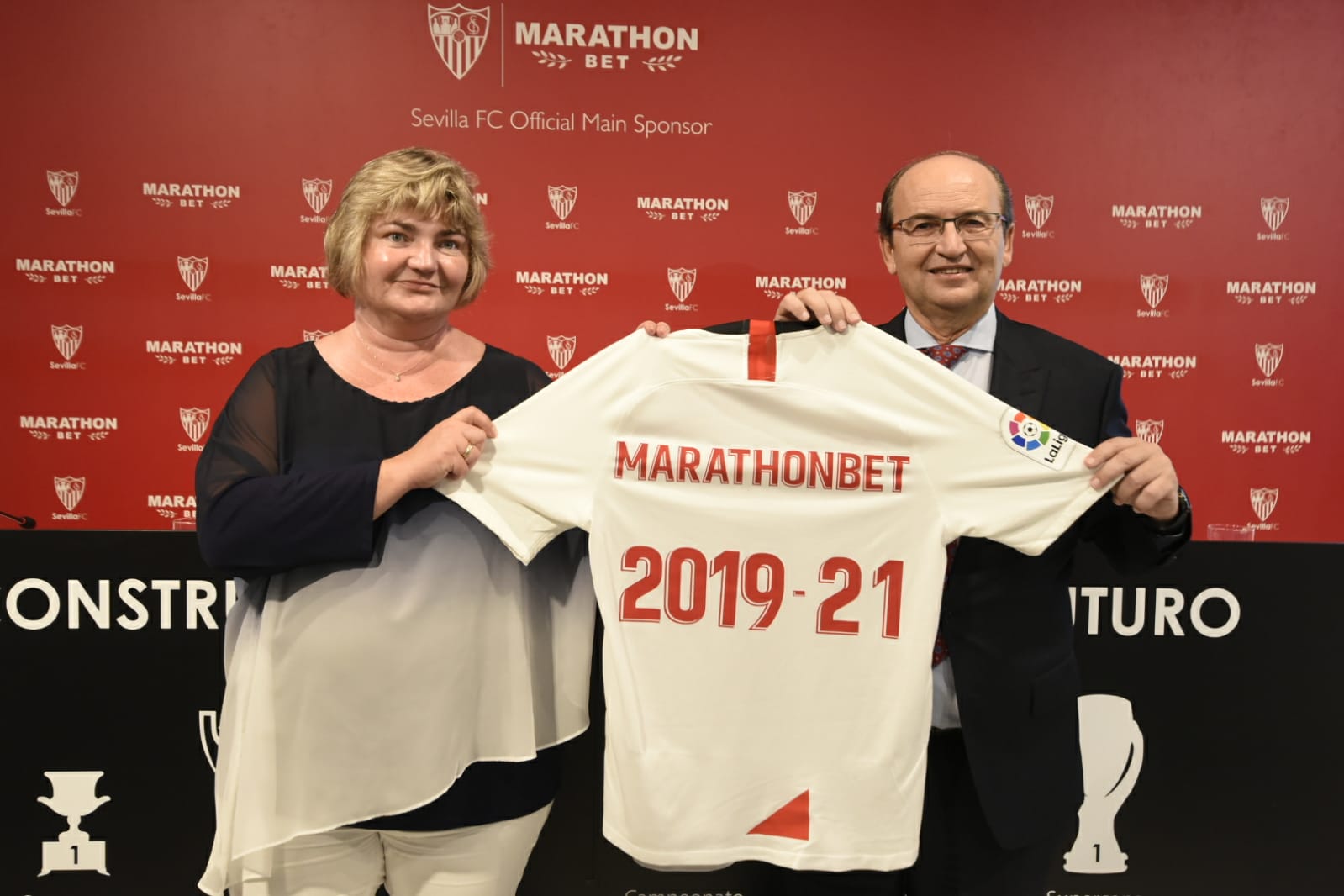 Entradilla
The betting-house has promised a season of events, experiences and surprises for the Sevilla faithful
Cuerpo Superior

Sevilla FC's partnership with Marathonbet was made official this Tuesday, after Natalia Zavodnik (CEO of the betting company) and Club Chairman José Castro signed the deal that confirmed a two year sponsorship agreement. Through the deal, Marathonbet will not just become Sevilla FC's front-of-shirt sponsor but also facilitate events, surprises and experiences for Sevillistas - all with the aim of connecting fans with their footballing idols.

The new sponsor has shown firm interest in contributing to the Sevillian community and offering an added value both through its own Social Networks and other communication channels. The company is committed to the growth of Sevilla FC, which will naturally be looking to add to its illustrious history of one La Liga title, five Spanish Cups and a Spanish Super Cup. As the club with the most titles won in the Europa League, Sevilla will now be looking to win the competition for the sixth time in the 2019/2020 season, in an exciting new era under Julen Lopetegui and Monchi at the helm. In addition to the five Europa League titles won, the Club also won the European Super Cup in 2006.

Marathonbet stands out for its high odds model and a regular supply of highly competitive odds that position it as one of the market leaders. In this regard, the signing of the agreement consolidates a partnership that will look to put the Sevilla fan at the very centre.

José Castro, for his part, declared his "happiness to have the two parties together. There is a slogan that can be read in the Jesús Navas Stadium which says 'Building the Sevilla of the future' and agreements like this one endorse it. This is a step forward in all senses in the field of sponsorship, undoubtedly key in the context of football today".

"And from this stage, I can say that they are going to be more than satisfied with this collaboration for the two seasons we'll be working together. The bet that Marathonbet has made on Sevilla FC will be, without a doubt, a winning bet. Steps like this seem to me to be fundamental in the process of the internationalisation of the Sevilla FC brand that we have undertaken. To have a company like Marathonbet's profile as a partner in this transformation will undoubtedly be an unquestionable asset".