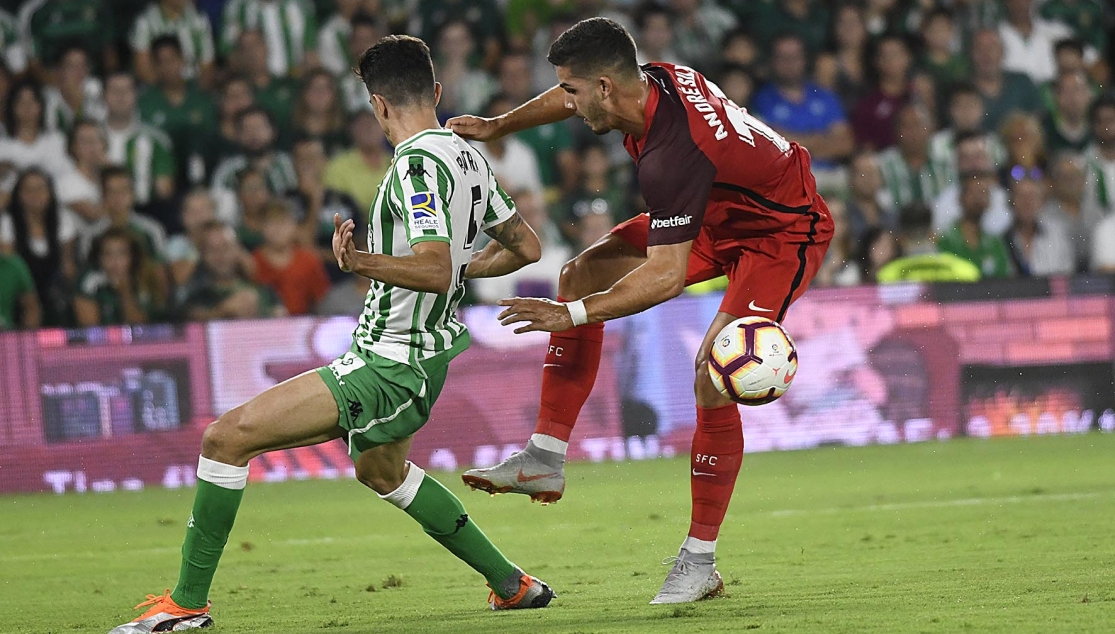 1-0: OUR UNBEATEN STREAK IN THE BENITO VILLAMARIN ENDS AFTER 12 YEARS

A defeat in el Gran Derbi after an even first half in a match which turned in Betis' favour after the break, when Roque Mesa was sent off for a second yellow card after a dubious incident. Joaquín's goal came after this and Sevilla could not respond to take anything away from the Benito Villamarin

The end of a 12-year unbeaten run in Betis' stadium. Sevilla fell to their first league defeat of the season on Sunday in a disappointing game, in which they struggled with Betis' possession game. They did control a part of the first half, however Roque Mesa's dubious sending off after a clash with Pau López complicated matters. Joaquín scored the only goal of the game midway through the second half and, to add insult to injury, Sevilla finished the match with nine men after Mercado had to come off after a collision. Machín's men came away from Heliópolis empty-handed.

Betis came out and controlled the game. They pressed and pushed up the pitch right from the off, with Tello going off on a mazy run and Inui firing over, putting Vaclík under pressure. Shortly after, it was Loren's turn, who profited from Carvalho's through ball to test the goalkeeper, who got down well to save the shot which ended up being called for offside. It took time for Sevilla to get into the game, but when they did they threatened with some dangerous counter-attacks.

The first half was marked with chances for both teams, but neither managed to open the scoring

After 15 minutes, Franco Vázquez had a shot, after hunting down a loose ball around the penalty box, forcing Pau López to push it around the post for a corner. Sevilla coming into the game eased the fans' nerves, who then saw Sarabia almost open the scoring with a shot following Jesús Navas' low cross. After a back-and-forth 15 minutes, the water break seemed to cool both teams down, giving way to a period of better positioning from both teams, which resulted in fewer chances.

Canales brought an end to this spell with what seemed to be the first goal of the night, after beating Kjaer for pace and putting the ball under Vaclík. Fortunately, the technology had the last word and Gil Manzano ruled out the goal. From then until the break, both teams had one chance each, with Arana's shot going wide and Tello winning a battle with Kjaer. The break arrived in a tense derby, with chances and mistakes for both sides, even though there were no goals.

Roque Mesa's dubious sending off finished the game as a contest, with Joaquín getting the winner

Things could have changed in the second half, if Banega's cross from a corner was finished off by Mercado, whose header at the far post sailed over the bar. From then on Sevilla tried to hit Betis on the counter - Betis dominated the game but without creating enough danger to worry Vaclík. However, a controversial moment, with VAR absent, changed the game. Pau López caught the ball and moved forward and bumped into Roque Mesa in his attempt to distribute the ball. The referee, who could have well given it as a foul by the goalkeeper, decided that Roque Mesa impeded López' path and, even more unexpectedly, gave him a second yellow card and sent him off.

Now, Betis found the motivation to go for the win and Sevilla, despite Gonalons' introduction, struggled to cope with Betis' attacks. One of them, ten minutes from the end, resulted in Joaquín's goal from a header at the back post following Mandi's cross from the edge of the box. 1-0 down, Sevilla struggled to get back into the game, who now had the debutant Promes and Aleix Vidal on the pitch. Despite eight minutes of injury time, as a result of Mercado's injury which forced him off, there were no dangerous opportunities and the points were lost with the final whistle. We now head to the international break with a bitter taste in our mouth, before we start preparing for the game against Getafe.