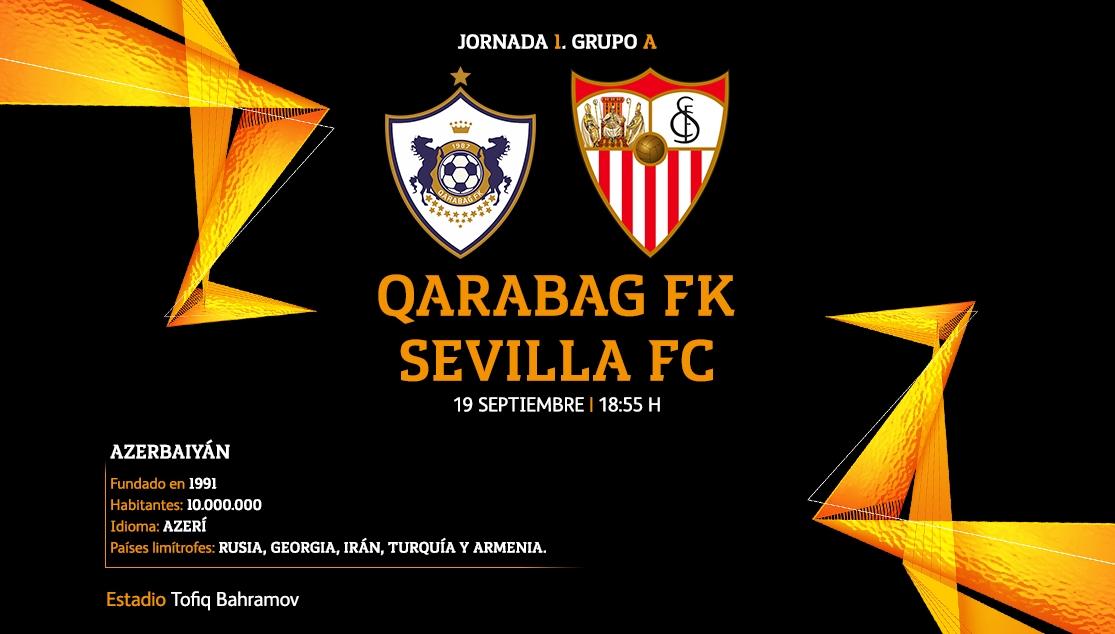 At 18:55 tonight, Sevilla FC will start another European tour in the UEFA Europa League, and tonight's match takes them to a new country, as with their other two away group stage matches. The squad are in Baku, the capital of Azerbaijan, and have been there since Tuesday night, preparing for the Group A match against Qarabag FK at the Tofiq Bakhramov Stadium.

The Azerbaijani side will host Sevilla after playing four league matches this season, the same as Sevilla. They lead the way in Azerbaijan with the best possible start, four wins out of four, scoring 10 goals and conceding none. Qarabag find themselves in the UEFA Europa League after a defeat in the UEFA Champions League against APOEL Nicosia, who are also in our group.

Qarabag lost in the Champions League qualifiers, and are top of their league after four games, just like Sevilla

Qarabag, originally from the city of Agdam, bordered by Armenia, decided to move to the capital due to the serious political tensions between Armenia and Azerbaijan, arising from both countries' independence from the Soviet Union. The Tofiq Bakhramov Stadium, where tonight's match will take place, has a capacity of over 31,000 and is also used by Azerbaijan's national team.

Sevilla FC landed in Baku 48 hours before the match in order to rest properly after the six-hour flight. Julen Lopetegui, in his press conference, declared that "tomorrow is the first match of an adventure that will get our hopes up, excite us and will be a part of the club's history. We are only thinking about overcoming the problems that Qarabag will cause".

The Basque manager, who travelled to Azerabijan with all 23 players that are able to play, will have to leave five players out of the matchday squad. Only Nolito has stayed in Sevilla, in order to continue his recovery from a muscle injury.

The match will kick off on 19th September at 18:55 (20:55 local time), at the Tofiq Bakhramov Stadium and will be refereed by the Ukranian Yevhenii Aranovskiy.

First team
THE BANEGA FAMILY, WITH THOSE MOST IN NEED IN ROSARIO DURING THE PANDEMIC
Leer más
END_OF_DOCUMENT_TOKEN_TO_BE_REPLACED