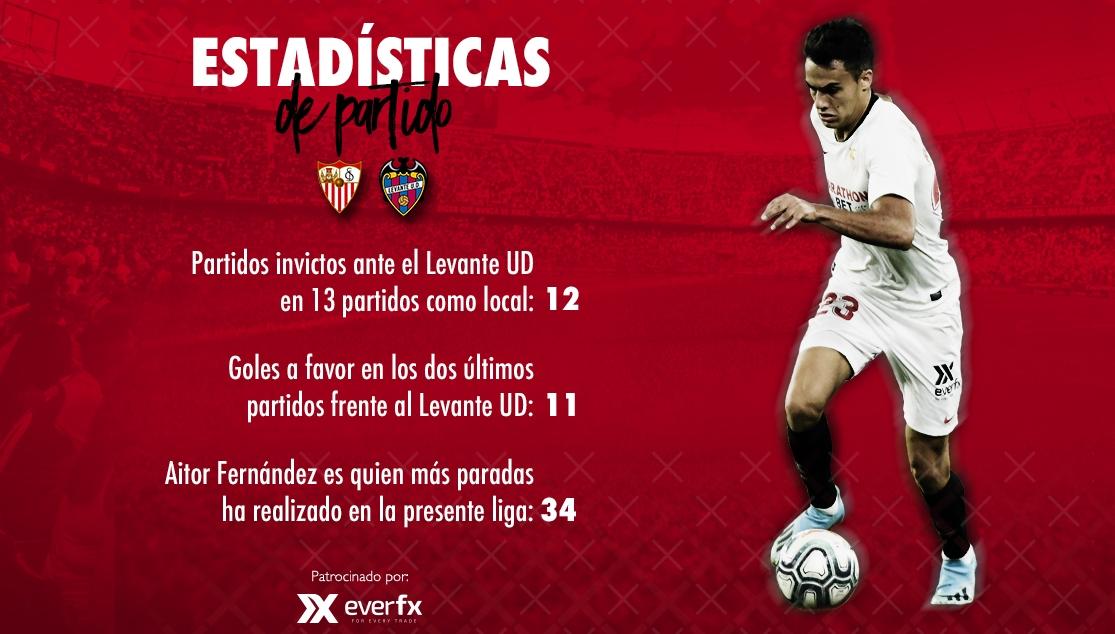 LaLiga is back this weekend after the second international break, and it is back at the Ramón Sánchez-Pizjuán, where Sevilla have three home games in the space of a week, facing Levante, Dudelange in the UEFA Europa League on Thursday, and then Getafe. The first match against Levante is the ninth of the league season and Sevilla are looking to start a winning run in the league after defeating Real Sociedad in their last home league game.

Sevilla are sixth in the table with 13 points and host Paco López's Levante who are just two points behind in tenth place, in the middle of a very tightly-packed mid table. They arrive in Nervión on the back of their first away win, which was a 2-1 win away at Leganés in the last match before the international break.

This will be the fourteenth time Sevilla host Levante in LaLiga, with just one defeat in 13/14

Of course, past form never guarantees a result, but the Blanquirrojos have a very positive home record when hosting Levante at the Sánchez-Pizjuán. On the 13 occasions that Levante have played here in LaLiga, Sevilla have suffered just one defeat, which came in 2013/14, picking up eight wins and four draws in the other twelve.

Last season was particularly fruitful for Sevilla FC, beating Levante by a large margin in both league matches: a 6-2 away win in Valencia and a 5-0 win in the Andalusian capital. However, the Granotas come into this match having conceded one goal less than Sevilla, ten, thanks to the performances of goalkeeper Aitor Fernández, who has made the most saves in the league this season, with 34.

In the pre-match press conference, Lopetegui was wary about the strength of Levante: "They are even more dangerous away from home"

Paco López, Levante's manager, has picked a squad of 20 players for tonight's game, with the absences of both Enes Bardhi and Oier, the sub keeper, who are both injured. Lopetegui was keen to highlight the away side's strength in his pre-match press conference, stating that "we are going to need to play a good game to win against them; you can see that they are even more dangerous away from home, they are a very well-drilled side".

The match will take place at the Ramón Sánchez-Pizjuán tonight, Sunday 20th October at 21:00 local time, and will be refereed by the Madrileño Cuadra Fernández, and Pizarro Gómez will be in the VAR room.

First team
THE BANEGA FAMILY, WITH THOSE MOST IN NEED IN ROSARIO DURING THE PANDEMIC
Leer más
END_OF_DOCUMENT_TOKEN_TO_BE_REPLACED