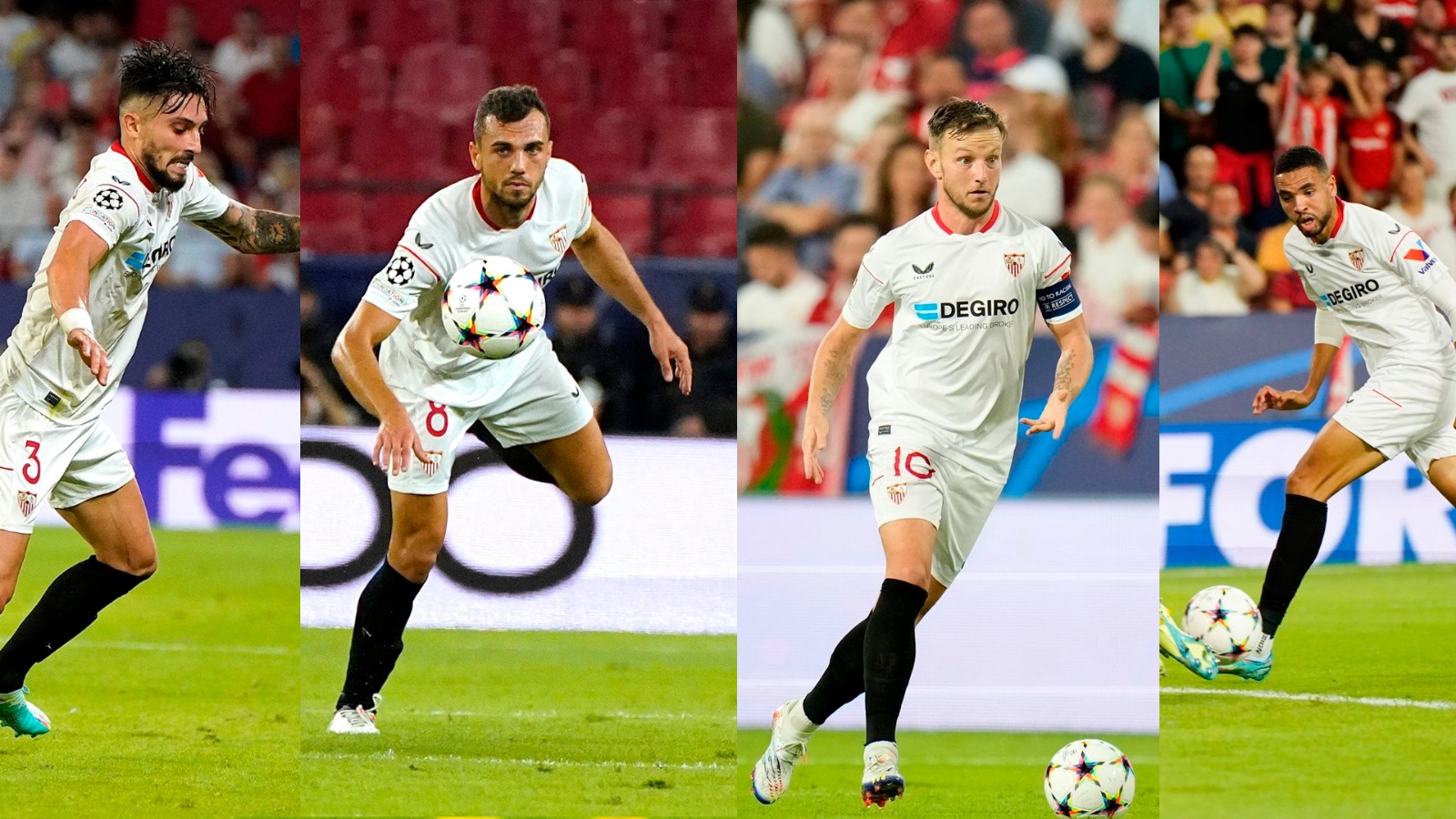 Entradilla
The four agree on the need to shift the narrative to recover their best form and best results.
Cuerpo Superior

Joan Jordán, Youssef En-Nesyri, Alex Telles and Ivan Rakitic appeared before club media after Wednesday's defeat at the Sánchez-Pizjuán. Jordán spoke first following the loss: "To sum it up we are playing at the height of European football, we didn't control the game either offensively or defensively and in Europe, you just don't get away with that. We had chances to equalise that we really should have capitalised on, we're in a tough situation but on Saturday we have the perfect opportunity to play a great game in front of our fans. We don't have to look beyond the game against Athletic Bilbao to change the narrative. The dynamic has shifted the other way in recent weeks, we've had games this season in which the team deserved more but we began to doubt ourselves, in those situations we have to pick ourselves up and keep going. We are playing for the badge and a huge fan base to give them what they deserve".

The Sevilla midfielder continued to speak self-critically: "We have to work harder in our pursuit of trying not to concede and trying to finish the chances that come our way. I'm as much in need of this hard work and concentration as anyone else on the pitch, the most important thing for me is the team, I'm not happy with our side scoring because it was meaningless without getting the win. As for the red card, I was convinced that it was the right call to overturn it". In the same vein, Alex Telles spoke of the improvement the team needs: "We are in a rough patch, we want to get out of this situation and we have to work harder, leave it all out there for the club and for the fans. Football is like that, but we have to be united to move forward, we are doing our best to get out of this mess. I've only been here for a short time, but we have to calm down and not get frustrated, acknowledge that the moment is not easy and take it step by step".

"We know we our fans deserve better, and we are angry with ourselves that we can't deliver it for them".

To finish, Ivan Rakitic also spoke, showing his sadness once the coach's dismissal was announced: "It's a very sad moment, unfortunately it's part of football and we have to get up quickly to be at our best on Saturday. Today we did a lot of things right, but in the Champions League the slightest mistake is punished. It's time to clear our heads and turn this around, I think we were heading in the right direction with the effort and desire we put in, but in the Champions League this is how it is and we have to change our mindset. We have to improve on Saturday, because we know we owe it to our fans. We wanted to go for the game, but we have to try to minimise our mistakes. Clear our heads, prepare well, We know we our fans deserve better, and we are angry with ourselves that we can't deliver it for them".