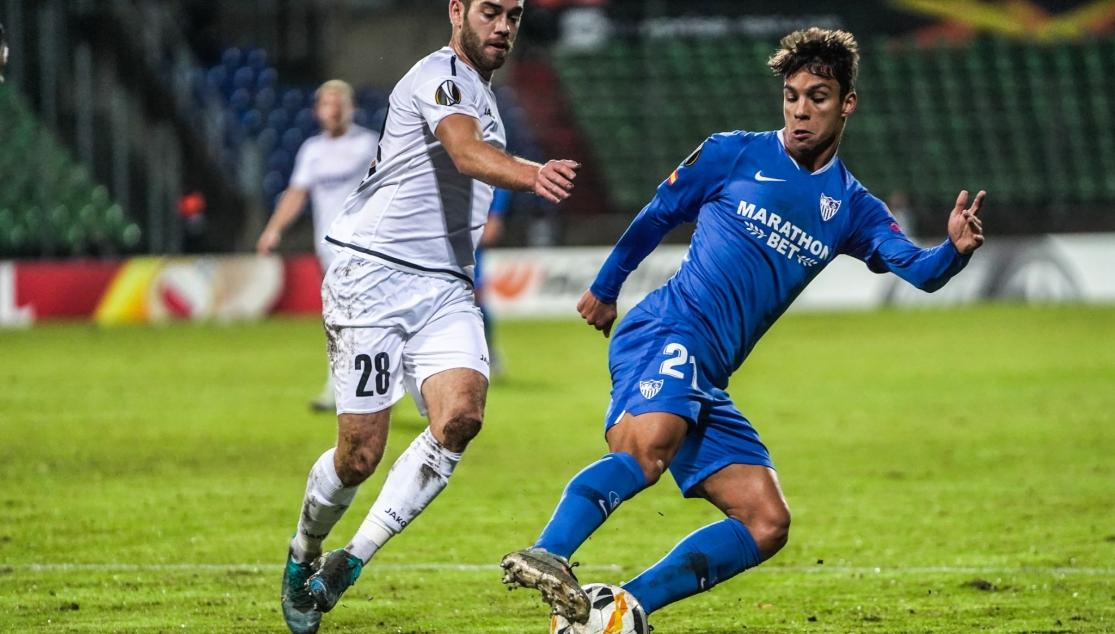 ÓLIVER TORRES: "WE KNEW THE IMPORTANCE OF THE GAME"

"We're very happy because it's not easy to, after the fourth match, have qualified for the knockout stages"

Óliver Torres, Sevilla's centre-midfielder spoke to the media after the victory over Dudelange: "We're very happy, as we knew the importance of the game, and also how difficult it was going to be. I think we approached it in the right manner, with full concentration and determination. We're happy that everything has went well. Everyone trains hard every day so that when we are needed, we are ready. Today, we showed this".

The player spoke about the game: "You have to be able to play no matter the surface, even though some pitches require a different approach. We had to be more switched on during the game. From the start, I think the team showed their intensity, rhythm and will to win. We were able to find spaces and create opportunities on a complicated pitch. We're very happy because it's not easy to, after the fourth match, have qualified for the knockout stages". It was a game played in the wind and rain also: "Each game is a different opportunity, a different experience and a different way of enjoying what we all like to do. The pitch, circumstances or the opponent don't matter at the end of that day. We are so lucky to be able to do what we do".

It was a comfortable win in a competition which is so important for the club: "We all know what Sevilla has given to the the competition, and vice-versa as well. We have to keep on improving, keep on going forward, and make our way slowly but steadily towards the latter stages of the competition, so that we can compete for this title".

"There's a lot of competition and it's the gaffer who decides who plays. From now though, we have to start preparing ourselves for what is a special and beautiful game. If the gaffer wants me to play then I will, and I will give my all for the team. No matter who ends up playing, Sunday is all about winning". Óliver spoke about Sunday's game and said that it is "a special game, and different to any other that I've experienced. It's so evident how much it means. We are going into the game with a lot of will and excitement to win."

"We are fully focused ahead of the upcoming game"

The team will go into the game with confidence after Thursday night's win: "To come to Luxembourg and play as well as we did gives us a lot of energy and even more motivation for Sunday's game. With this mentality, we will get all three points".

First team
THE BANEGA FAMILY, WITH THOSE MOST IN NEED IN ROSARIO DURING THE PANDEMIC
Leer más
END_OF_DOCUMENT_TOKEN_TO_BE_REPLACED