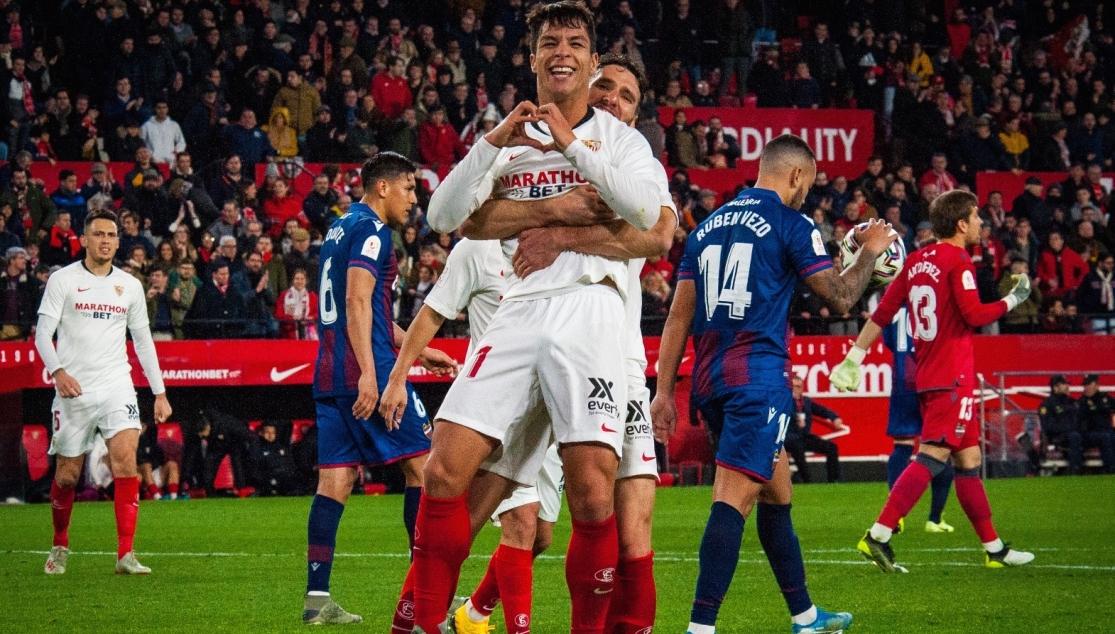 On this cold Tuesday night, Sevilla FC secured their passage into the Copa del Rey Last 16 after eliminating Levante UD. After a first half in which the home side dominated, they headed down the tunnel with the scores level. Much like the first, Sevilla FC dominated the second half as well as they put made their dominance count by overcoming a good Levante side by 3-1.

It was a first half in which Sevilla FC came out of the blocks quickly and took the game to their opponents from the first whistle. The home side played with intensity and a rhythm that the away side failed to match, and whom were therefore camped in their half for much of the game. That's how the game started and chances soon came their way, with two almost consecutive ones coming to Nolito after passes from Navas and De Jong. Committed to the cause and after pounding relentlessly on the door, the deadlock was broken. Sevilla put the pressure on and after Ocampos stole the ball in their area, he laid it off to Fernando who, after showing a lot of composure to evade two defenders, slid the ball into the back of the net past Aitor in the Levante goal.

Levante levelled the scores around the half-hour mark, in a half which was dominated by the home side

Even though they were one goal to the good, Sevilla kept persisting and looked to add to their lead. Ocampos didn't get a good connection on a Navas cross and neither did Nolito whenever he met one from Escudero. However, on the second advance forward from the away side, they found the equaliser in the 30th minute. A free-kick whipped in from the left hand side by Rochina found the head of Duarte who placed a powerful header into the back of the net, giving Vaclík no chance in the Sevilla goal. That would be how both teams would head down the tunnel for half time, with Lopetegui's men not making their possession and territory count in the first 45 minutes.

However, things would change rather quickly, as the home side came out with a renewed purpose in the second half. With hardly two minutes played of the second half, Ocampos fired Sevilla FC back in front with a rifling shot from outside the area. The home side went back in front and therefore, the pressure was once again shifted on to the away side to respond. And that they nearly did. A corner from Campaña missed everyone at the front post and if it weren't for a good intervention from Vaclík, the scores would have been level once again. Once again, the away side found a way through down the right-hand side of the pitch. Rochina was put one-on-one with the Czech goalkeeper, but his effort was saved by Sevilla's shot-stopper to keep the home side in front.

Sevilla were once again the dominant side in the second half, and in the end ran out comfortable 3-1 winners

Sevilla FC once again took control of the match and sealed the win soon enough and their passage in to the Round of 16. A good combination down the lef-hand side ended with De Jong driving with the ball into the box. He lifted his head, and picked out Óliver who made no mistake, and coolly slotted the ball past Aitor to give his side a two goal cushion. The scoreline could have been more as well for Sevilla as En-Nesyri, who was making his home debut, had two good chances to open his account for Sevilla FC - with one of them being a bicycle kick. However, he was unable to on this occasion, and the game finished 3-1.

Sevilla FC will find out their opponents for their Last 16 clash on Friday afternoon, at 13.00. This is also the day in which they'll have their last training session before hosting Granada CF in Matchday 21 of La Liga on Saturday night. That game will kick off at 21.00.

The Club
JUAN JOSÉ JIMÉNEZ: "THE SPORTING WORLD IS SETTING AN EXAMPLE TO EVERYONE"
Leer más
END_OF_DOCUMENT_TOKEN_TO_BE_REPLACED