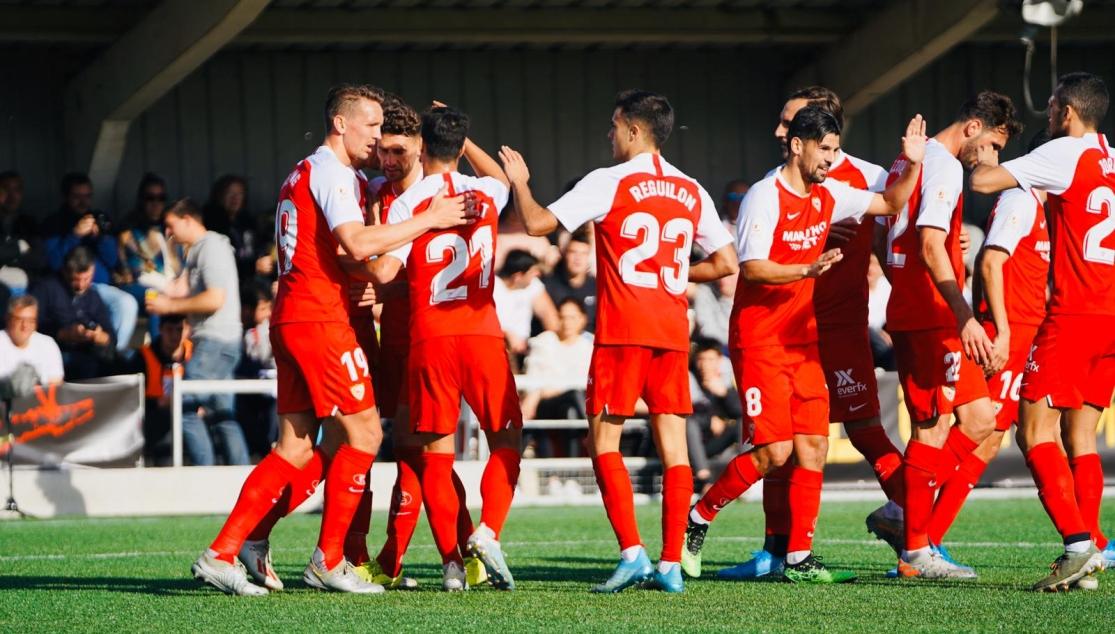 A dominant Sevilla side went through to the next round thanks to goals from De Jong, Nolito, Ocampos, Vázquez and Óliver

Sevilla FC appeared by far the better side on paper, but they had to demonstrate that in a very different environment to what they are used to. All said and done for a side that comfortably defeated UM Escobedo from the Third Division, a very motivated side who gave their all, but they had no answer for Sevilla's dominance. Goals from De Jong, Nolito, Ocampos, Franco Vázquez and Óliver sent the Blanquirrojos through to the next round of the cup, and they could well have scored more on a crisp Sunday lunchtime in Cantabria.

A good attitude was key to Julen Lopetegui's plans and the side did not hesitate to show that at the Eusebio Arce Stadium. It took just three minutes for Sevilla FC to test goalkeeper Rafa, as Nolito played in De Jong, but he was unable to convert. The Nervionenses wanted the ball and were basically camped in Escobedo's half, and the opening goal came not long after, which came from a Jesús Navas breakaway just after the quarter of an hour mark. It was pinball in the box, and the ball eventually fell to De Jong who fired home from close range.

A one-goal lead in this type of game can be a double-edged sword, but it was quite the opposite for Sevilla, as they continued to play at a quick tempo. Their attacks were focused on the right wing, while Bono was a mere spectator in the first half. A Franco Vázquez effort and a free-kick from Jordán nearly extended Sevilla's lead, but the second goal came from another Jesús Navas breakway. Rafa saved the initial effort, but Nolito was on hand to bundle home the rebound and double the lead.

Sevilla wanted more and Nolito could well have added a third before half-time, but Rafa was able to tip it away for a corner. The Cantabrian side came out fighting in the second half, but the tie was quickly put to bed. Nolito found space and crossed for Ocampos, who headed the ball over Rafa and into the far corner. Lopetegui then made his first change of the match, bringing on Bryan Gil in place of Nolito.

Escobedo had the odd chance in the second half, but were unable to contain a Sevilla side who did not settle for a three-goal lead. They got their fourth with fifteen minutes remaining, as a Jordán corner fell kindly to Franco Vázquez, who slotted with ease. Rony Lopes and Chicharito were brought on for the final few minutes, and Óliver Torres scored in the last play of the match, rounding off a great team move to add a fifth.

The result means that Sevilla FC are into the Copa del Rey Round of 32. Fifteen sides from LaLiga are in the hat for the next round, and another three sides could well join them tonight. This means that if at least two more LaLiga sides qualify tonight, there is the possibility that Sevilla FC could face a LaLiga side in the next round of the cup. The next round, as with every round apart from the semi-finals, is played over just one match, and is decided on the night.

First team
LOPETEGUI: 'IF YOU DON'T SCORE AND LET THE GAME GO ON, THESE THINGS HAPPEN'
Leer más
END_OF_DOCUMENT_TOKEN_TO_BE_REPLACED