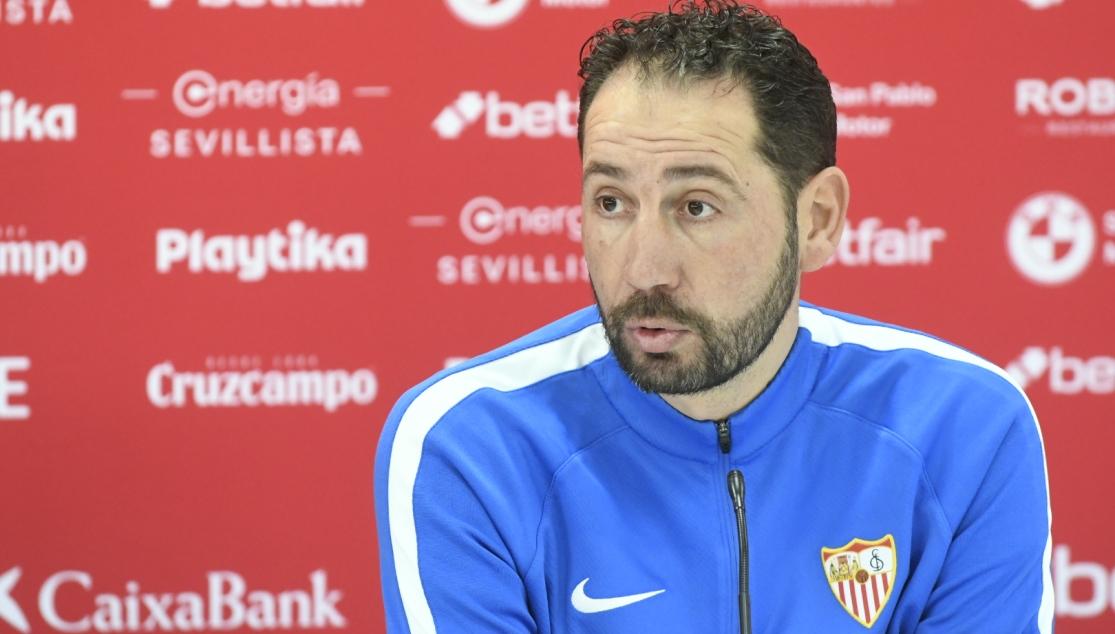 MACHÍN: 'IT'S A COMPLICATED TIE, BUT I'M SURE THEY THINK THE SAME AS US'

'Injuries and other factors mean we'll have to change some things, but the essence of the team must remain the same,' stated the manager

Sevilla FC, Pablo Machín, gave a press conference today in the run-up to the cup tie against FC Barcelona: 'We must be prepared if we are to beat Barcelona. It's a complicated tie and I'm sure they think the same as us. No one wanted the current leaders of La Liga and the team who has won the past four cups. But, should we go through, it would make it all the more sweet.

The coach evaluated what his team may need to go through to the semi-finals: 'It's tough for any team to win by more than one goal in the Camp Nou. The plan would be to bring a positive result to the Camp Nou and try to keep a clean sheet, but that would be difficult. If we are to cause a surprise in this tie, because we all believe Barça are the favourites, we need to bring a result to the Camp Nou where we don't have to score more than one goal.'

'If we have to change something we will evaluate it, we won't be impulsive'

'The objective, and what's logical, is to keep doing what's going well for us. In the short term, without thinking about our opponents or circumstances, we can say we need changes, but the team has character and if we look at the table we can say we're doing very well. Injuries and other factors mean we'll have to change some things, but the essence of the team must remain the same. If we have to change something we will evaluate it, we won't be impulsive,' stated the Sorian regarding his football.

Finishing off questions on the Madrid game, Machín commented 'I'm the most critical person with myself, as well as the person who tries to improve and transmit that to the team. I accept my responsibilities. It was 0-0 in the 80th minute at the Bernabéu and we had a chance to win. I admitted Madrid were better than us in terms of controlling the game and we were barely able to string together four passes to create chances. But I don't deny that we played poorly, especially in the second half.

'It's often not what your head wants to do, rather what your legs are capable of doing'

Machín added, asked about the team's current form, that 'I want to think it's not mental tiredness because the team is in a good shape and, in general, the results are good. I can understand that it would be a slight drop in our physical condition because we're playing many games and that takes its toll. I won't use the injuries as an excuse, but our players aren't machines and they've been playing at a very high level. I always demand that they play at this level, but we have to understand they can't always play like that. When more than one player suffers this drop it takes its toll on the team. We need to be in a good shape physically, but it's often not what your head wants to do, rather what your legs are capable of doing.'

'I don't think I have to say anything to the fans because they are always with the team. They're going to be there against Barçca to help us against one of the best teams in the world. We want to be a group and a large part of Sevilla's success is a result of them pushing us on, we really value that. When the draw took place no one wanted Barça, but it is what it is. We have to play them and anything can happen in football. It's more complicated to surprise a team over two legs, but we're going to try to compete well in the first half of the tie,' explained the manager regarding the fans' importance tomorrow.

The Club
JUAN JOSÉ JIMÉNEZ: "THE SPORTING WORLD IS SETTING AN EXAMPLE TO EVERYONE"
Leer más
END_OF_DOCUMENT_TOKEN_TO_BE_REPLACED