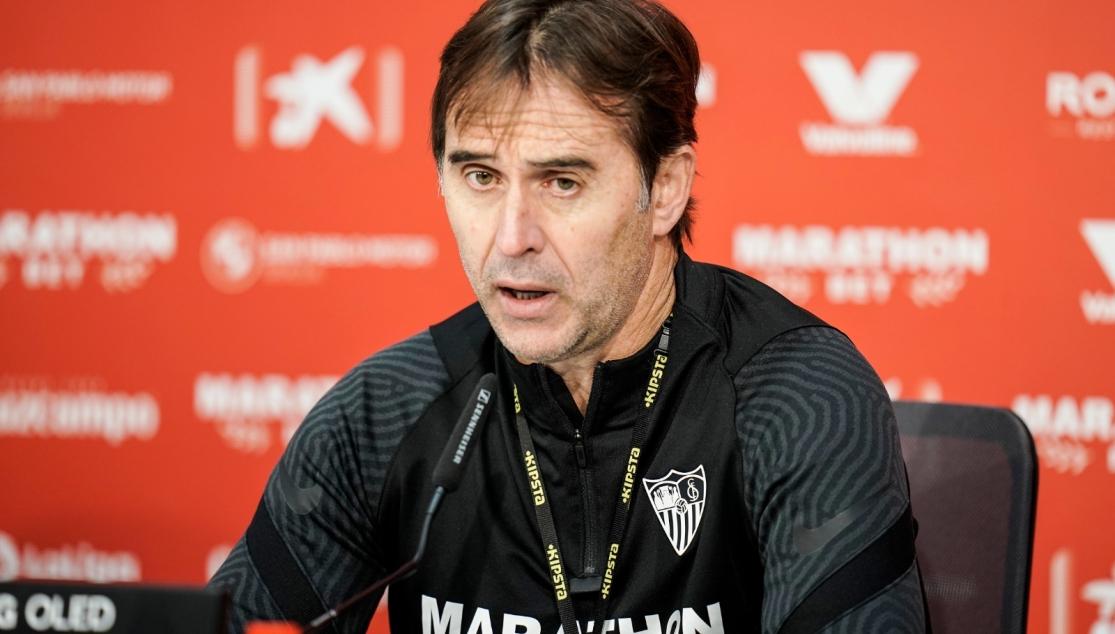 LOPETEGUI ON LINARES: "IT'S A GREAT OPPORTUNITY FOR THEM, BUT NO LESS SO FOR US"

The manager explained that Carlos Fernández is injured, while Ocampos and Navas did not train today due to knocks

Tomorrow, the Nervionenses are in Copa del Rey action in Linares and Julen Lopetegui has today offered his thoughts on the opponents: "They're a strong team. They have a chance to get promoted, they play well, they have good resources and they're used to the environment and their stadium. They played very well here against Sevilla Atlético, but they also did in many other league matches and they're one of the toughest teams from their pot, in their division".

The manager then spoke about absences, particularly that of Carlos Fernández: "He's injured. He has not trained for a few days, before the match against Betis. He also has a knock for this match". Lopetegui confirmed that both Ocampos and Navas did not train today because of knocks: "Ocampos had a few niggles in the derby and Jesús also took a knock. For that reason, we've decided that they wouldn't train. Navas has recovered from his injury. He's got no problems and if he hasn't trained, it's because of a knock. He has completely got past his injury".

"Navas hasn't trained because of a knock. He has completely got past his injury"

The team have left the derby behind, and are only thinking about the Copa: "The team is focused and excited about this competition, which demands a lot of you because every match is a final. You're playing away from home and in difficult circumstances against good teams. It's a great opportunity for them, but no less so for us. We're placing huge importance on this match and we'll adapt to the difficulties of the opponent, the pitch, the context... We have to do it quickly and the team are only thinking about tomorrow".

He also emphasised that everyone has to be ready: "The alarm has already gone off for everyone this season. There are moments for everyone, but tomorrow what will prevail is the desire to progress. We'll pick a starting eleven to face our opponents and everyone who plays will have the responsibility and opportunity to win a cup tie. Everyone must be ready".

"I had no doubts about Bryan Gil, neither then nor now"

The transfer window is open, but there are no distractions for the manager: "I don't want that to turn my head away from the cup match. We're 100% thinking about tomorrow's match and nothing else". Lopetegui then praised Bryan Gil's performances at Eibar: "I know he's having a good season. He's a great player and Sevilla have a fantastic player for the future. I had no doubts about Bryan Gil, neither then nor now. I'm sure he will be an important player at Sevilla.

To finish, he was asked about the possible inclusion of academy players in the travelling squad: "We're focused on tomorrow's match. The players who will be involved... sometimes there's space for some of them and sometimes they'll have to wait. They're young lads, with futures, and they have to keep working hard day by day to carve out that future. It's not a one-day thing. They are lads from the club, with good conditions and they have to work on the present. Our present is Linares and the Copa del Rey".

First team
LOPETEGUI: 'IF YOU DON'T SCORE AND LET THE GAME GO ON, THESE THINGS HAPPEN'
Leer más
END_OF_DOCUMENT_TOKEN_TO_BE_REPLACED