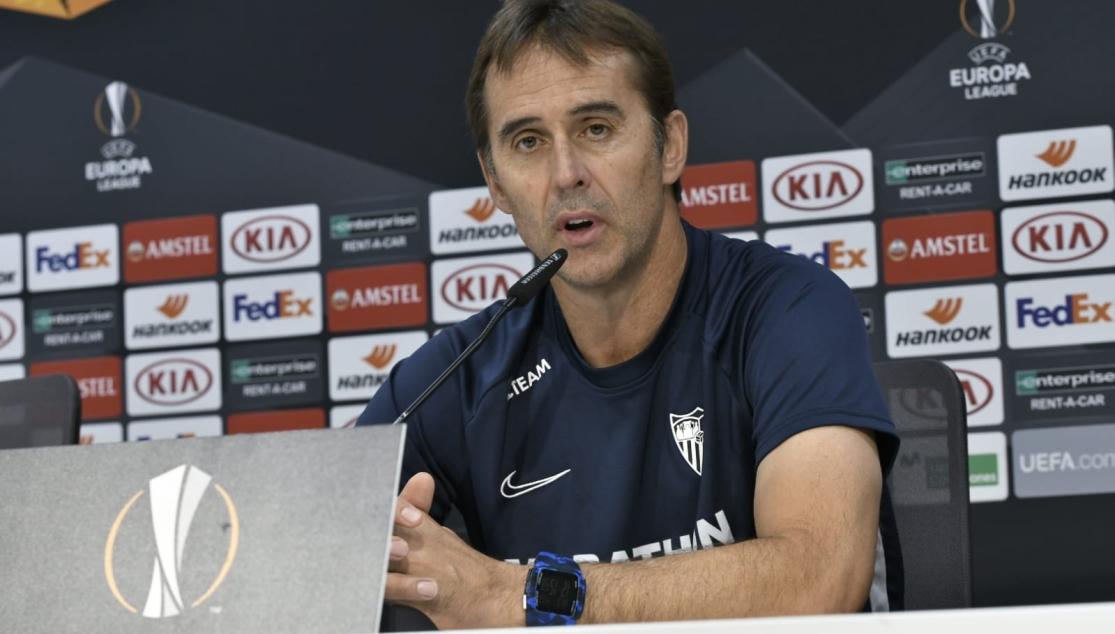 LOPETEGUI: "WE KNOW OUR HISTORY AND WE WANT TO WIN IT AGAIN"

The Sevilla manager did not talk about being clear favourites against APOEL: "They were a goal away from knocking out a Champions League semifinalist"

At his press conference, Julen Lopetegui made it clear that APOEL would not be an easy game: "They would have eliminated Ajax, last season's semifinalists, from the Champions League with a goal in the second leg. A few years ago they knocked Athletic Club out of the Europa League, and I would say they have a better team now. People say things, but the reality is different. We will have to play well to win". Once again, he underlined the importance of the Europa League: "In every competition, you want to win the next game. We're aware of what the Europa League means to the club. We know our history and we want to win it again".

He was asked about the 3-5-2 used by Thomas Doll, but the manager doesn't presume anything: "You're presuming his formation, but I'm not. He has played with different tactics and different formations. I don't think we have to focus on their system, because they could change it". APOEL also won the Cypriot Super Cup on Saturday: "They won with a rotated side and tomorrow will be difficult. We have to win with respect and ambition, but we have to play well too".

Lopetegui did not want to talk about rotating the side: "The idea is managing the squad and picking the best side. You all talk about rotations but I do not call it that. We will look for the most competitive starting XI possible." He also spoke about the lack of a goal for De Jong: "I don't think about it like that. It's a team effort and whoever scores, scores. Logically, those who play further forward will score more goals. We're happy with his work".

Also, he did not say whether it would be a chance for other strikers to play: "Javier arrived here very late. He has had minutes and he could start tomorrow. Dabbur is playing well in training and is another option. We are lucky, touch wood, to have everyone available and we have to make that decision. He is playing well and he will get his chance. Finally, he spoke about things that can be improved on: "Self-criticism is always there, regardless of the result. When things go badly, not everything is bad, and viceversa. Obviously we prefer to win, and there are things we can improve on, as with every team. We want to become more and more solid at the back".

First team
THE BANEGA FAMILY, WITH THOSE MOST IN NEED IN ROSARIO DURING THE PANDEMIC
Leer más
END_OF_DOCUMENT_TOKEN_TO_BE_REPLACED