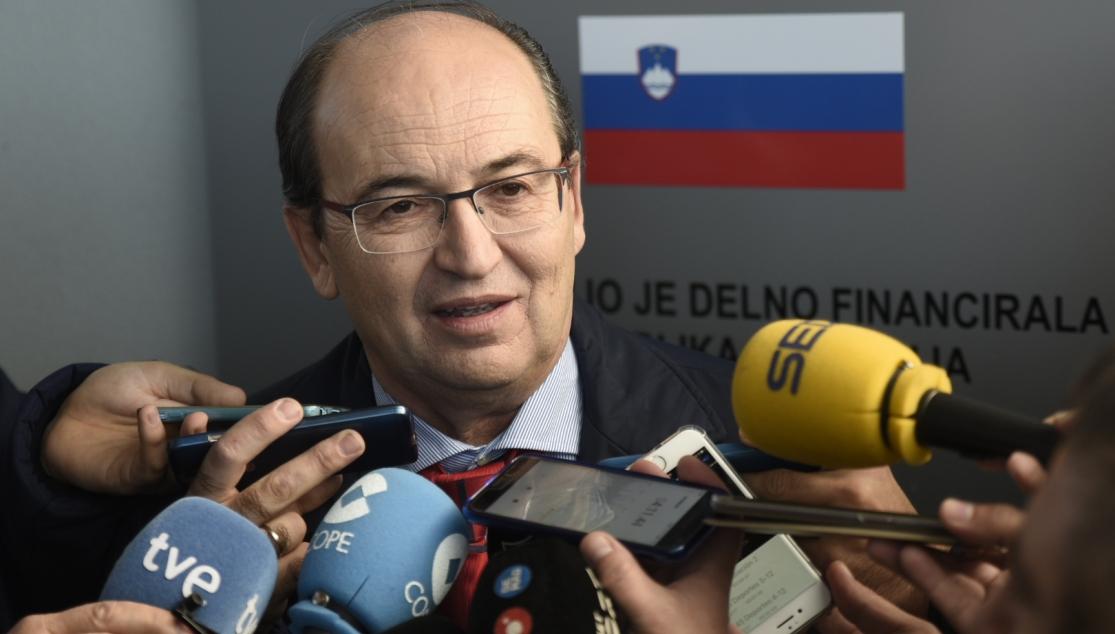 JOSÉ CASTRO FROM MARIBOR: “WE NEED TO LIVE UP TO OUR FAVOURITES TAG ON THE FIELD AGAINST CÁDIZ”

The Chairman analysed the recent Copa del Rey draw and assured the press Sevilla were in Slovenia "to win; we've not come here to hesitate" in progressing to the knock-out stages of the Champions League

Having just landed in Maribor, Chairman of Sevilla FC, José Castro, had heard news of the Copa del Rey Round of 16 Draw, which had revealed Cádiz CF as Sevilla's next cup opponent: "That's what the draw wanted, I think it's great. It will be a difficult tie, given the results they've got in the league and Cup recently". For the same reason, he said he didn't believe in a favourites tag: "That's the team who wins. They're in the Second Division, that's true and Sevilla is in the First and playing in the Champions League but we have to show it on the pitch. Favourites show it on the pitch."

"Every team has their weapons and football is increasingly even"

He also seemed satisfied by the proximity, "it's welcome because of the number of matches we have"; but he insisted the club can't rest on its laurels: "Anyone in football who thinks they've already got another team eliminated doesn't have a clue. We know we have to respect our opponent and try to be better than them. It's not going to be easy but, sure, compared to Real Madrid, FC Barcelona and Atlético it's an accessible opponent. It will be tough though because every team has their weapons and football is increasingly even". The fans will also play an important role in pushing the team: "There will be a lot Sevillistas who make the trip to their stadium. We should be happy".

"We want to win here and finish top of the group"

On the Champions League and the final game of the Group Stages against Maribor, José Castro said the team has "come to Slovenia to win and not rely on anything. We're really close but we have to finish off by winning here and qualify as first in the group, which would be very important".

A match that will see Steven N'Zonzi absent, having received the Club's permission to travel to London: "As already said by the coaches, the situation is merely a technical decision that should be respected. Technical decisions are reversible, but they decide and in all cases we respect and will continue to respect their choices. There haven't been any offers for N'Zonzi. If they come we'd look at them but he's training as normal with the rest of the group and is visiting his son in London with the permission of the Club", added the Chairman.

Asked about Berizzo, Castro confirmed the close relationship maintained with the coach, who he visits "whenever I can and I call him regularly. He's calm, but coaching is in his blood. If he speaks with me every day, he consults with the coaches a lot more"

The next topic of conversation for the Chairman was Arana, the latest signing for the Sevilla FC squad, a player that "has not arrived yet, but will in the next few days. It was a deal that our coaches have been trying to seal since summer, but then the price was just too high. He's worked there since then to do so in the most convenient way for him and club until the transfer".

A last push to the second half of the season, which the Chairman neither confirmed nor denied could see the involvement of another player: "The team is doing well, the coaches will decide if they have to reinforce the side in December or not. It's true we have two centre-backs out but they're back in January. Then the coaches will decide and the Board will make a decision".