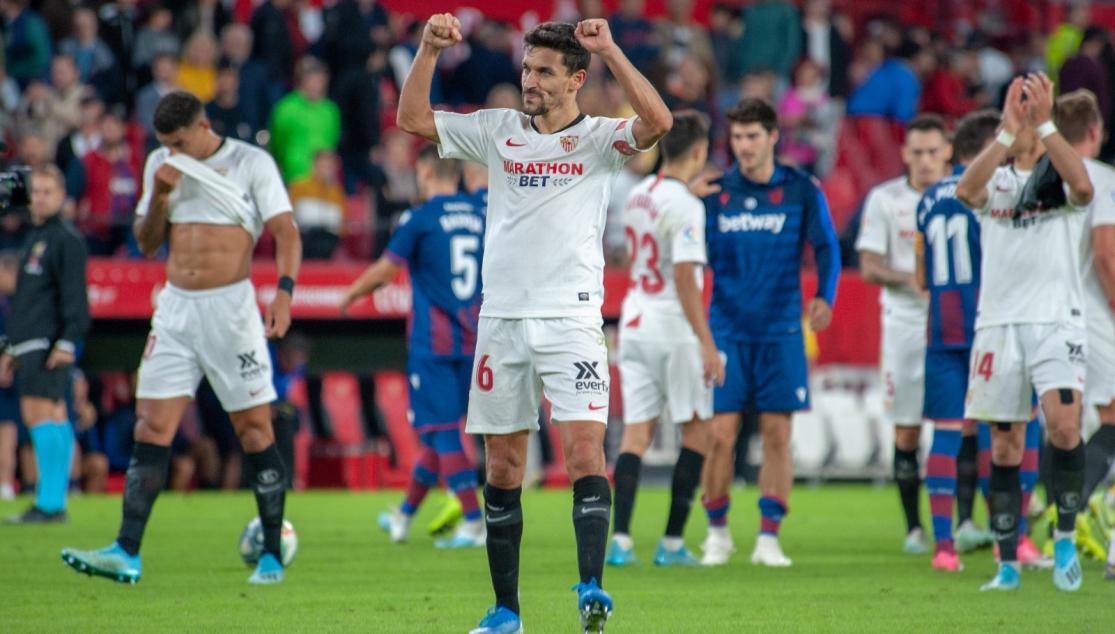 JESÚS NAVAS: ONE ASSIST CLOSER TO ONE HUNDRED AND HIS UMPTEENTH PERSONAL ACHIEVEMENT

Navas had 12 ball recoveries against Levante, the most he has made since his return to Nervión

Just a week after making his 40th appearance in Spain shirt, Navas once again showed that, for him anyway, age is just a number. He once again had a great game and didn't stop going up and down the right flank, overlapping and helping out Ocampos; rounding off a fantastic display by putting a cross on a plate for De Jong, who headed it into the back of the net to give us all three points.

After his assist for De Jong against Levante, he is now up to 71 assists in La Liga in the 21st century in a Sevilla jersey. The next most is Dani Alves who has 38, which makes this record even more impressive for our number 16. Likewise, after his cross for De Jong, Navas is only five assists away from one hundred for the team from Nervión, sitting on a total of 95 at this time.

However, Navas' outstanding game wasn't done there. Of the 15 crosses he put into the box, five of them found a teammate. This is another record for any player in a single La Liga match this season. Funnily, his last cross of the evening was the one that counted as it ended up on the head of De Jong, who applied the finishing touch to give Lopetegui's men all three points.

And, if his attacking prowess wasn't enough to keep everyone happy during the game; defensively, Navas achieved something which he hadn't done since his return to Nervión. During the win over Levante UD, the Sevilla captain made 12 ball recoveries, his best figure since returning from Manchester City. Amongst this dozen, there was one which was extremely important: he used all his pace to stop a charge forward down the left-hand side from Morales, which could have been very dangerous for the Sevilla backline.

Navas continues to work day after day, game after game in order to make himself better and for him, there doesn't seem to be a limit. Each game that he plays, he takes another step closer to setting or beating another record; to achieving something else as a Sevilla player. One more night, those inside the Sánchez-Pizjuán went home with the feeling that this little guy, who started to run up and down the right flank more than 15 years ago, still drinks the same potion of eternal youth. And, luckily for all of us, the cauldron still seems to be well filled.

First team
THE BANEGA FAMILY, WITH THOSE MOST IN NEED IN ROSARIO DURING THE PANDEMIC
Leer más
END_OF_DOCUMENT_TOKEN_TO_BE_REPLACED