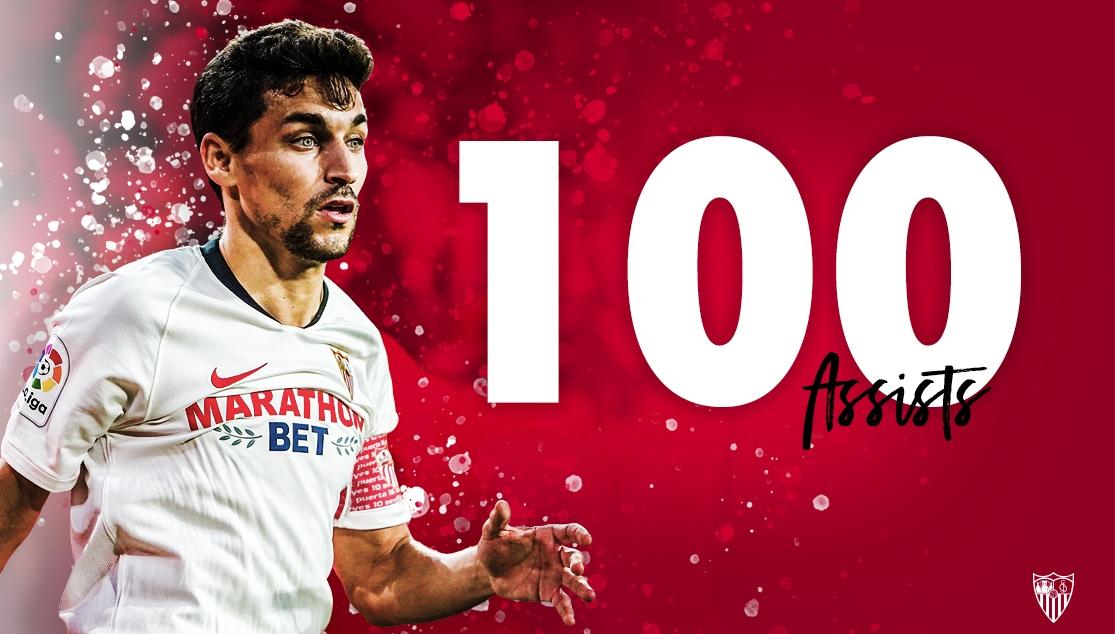 Jesús Navas continues beating his own records. The man from Los Palacios today made his 100th assist as a Sevilla FC player, demonstrating that he is still the same versatile player he always has been and it also demonstrates the confidence that all the managers have had in him. After a move down the right hand side, Navas fed in Óliver Torres, who kept his composure and rolled the ball into the far corner for his second goal of the match.

The club captain reaches a century of assists with six assists in LaLiga this season and another in the cup, with matches remaining in the league and also the UEFA Europa League, meaning that he still has the opportunity to beat last season's tally of eight in all competitions, which is his best return since his move back to the Andalusian capital.

His best season in terms of assists was in 2009/10. That season, Navas set up 13 goals in LaLiga, two in the Copa del Rey, which Sevilla won, and another three in the Champions League, giving him a tally just shy of 20. Talking about eye-catching statistics, his record for league assists in a single season is 14 in 2011/12, a season which saw Michel González replace Marcelino García Toral in the dugout. Clearly, the change did not affect the academy graduate, the now club captain, and shows he has always had the support of the manager.

He combined well with Kanouté in big matches to win silverware

Amongst those assists were assists in finals that he played in for 'his' Sevilla FC. On 25th August 2006, his header set up Kanouté to make it 2-0 against FC Barcelona in the UEFA Super Cup, before Maresca's late penalty wrapped up a 3-0 win. Later on that season, it would be Maresca who made way for Jesús Navas in the hard-fought 2007 UEFA Cup Final against RCD Espanyol in Glasgow, a change which brought more depth to Juande Ramos's side. Once again, the Navas-Kanouté combination was on show, as Navas's ball in from the right set up the Malian striker, who put Sevilla back in front.