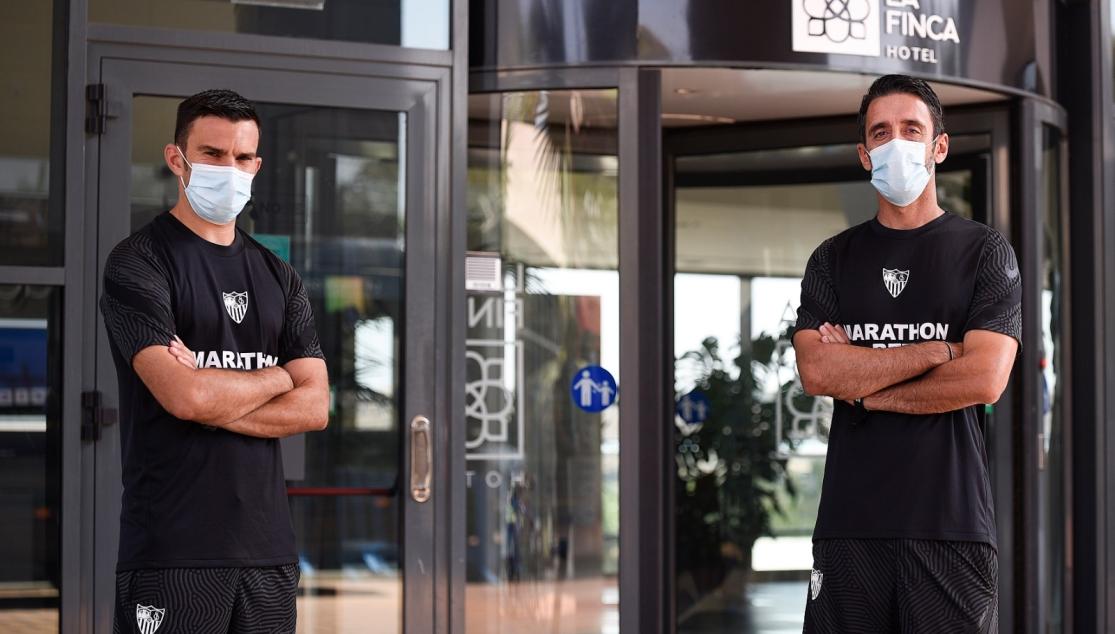 CARO AND CONDE: 'THE GROUP IS USED TO OUR METHODS AND THAT HELPS US A LOT'

Sevilla FC continue their preseason after the first of two friendlies that the team will play in San Pedro del Pinatar. Óscar Caro y Pepe Conde, Sevilla FC's fitness coaches, joined the club's media to go over how the preseason has been in relation to the team's requirements. 'The team is currently preparing for the future, for all the games that are to come. It's a preparation phase, back to work after a shortened break. But they're coming back having already some kind of base and that's allowing us to prepare this preseason in a different way,' Caro comments.

'We had a really short break of only 14-15 days and that affects how we prepare things, it's a different kind of preseason. We only have two and a half weeks to get into condition to compete so we need to introduce things that normally you wouldn't include this early into the preseason,' Conde said.

Caro pointed out that 'everything has its positives and negatives. We had the longest season of any club, and have the shortest amount of time to prepare for the next one. All our efforts are centred around this lack of time and we have to manage everything well so we maximise the positives and minimise the negatives.'

Conte highlighted the very positive way in which the group is going about its work: 'Our idea is to prepare the player and instil them with habits. It's helpful that we know the group and the majority of them are with us this season because they're used to the method and the dynamics. That helps those who arrive because they see that we have a process here and they assimilate it that much quicker. It's easier for us as they're comfortable and happy with the training we provide them with. We try and make it into a habit for them.

'The group has competition in their veins, they need to have an opponent in front of them. They love to compete'

Speaking about the minutes against Levante UD, Caro stated 'we look for a balance in preseason minutes. Some players have had even less time to rest because they have been with their national teams. It's been a very strange summer in terms of rest time. We need to accumulate more minutes so we can feel more fluid on the pitch together, with the match on the 24th our priority. The players need to have an opponent in front of them, to want to beat them, to compete. That's the kind of mentality this group has. Players need challenges.

'Things are going how we hoped, and in some cases we have even been surprised. It's very important for us to optimise the workload and these matches have been, and will be, staggered because we have to be accurate and precise in managing the workload. One of the most important parameters for a player to get into their top form is regularity. We want to see that progression in workload in these friendlies.'

'The players have a level of professionalism and compromise that we can clearly see, that is key to success'

The coaches finished the interview speaking about the importance of these two key factors: 'Last year we had a completely new group and we went about creating habits that they've picked up well. It took time, but once it fell into place the group began to feel more comfortable and see the results. These habits will continue in the future and that allows us to keep working towards a common goal that they're familiar with. After these difficult times, the team was able to recover and it made them stronger. This shows the professional and committed nature of the players we have here. I hope it continues, because it's one of the keys to success.'

'Players want to have the ball. Players are divided into many different parts, but the system we have here accommodates to the whole. Physical work has different components, but everything is included in every session, you just have to know what to emphasise. Purely physical work, the conventional kind, we don't do that so much. What we do is modified around workloads to optimise players' performance because we give a lot of importance to individualisation. Each player takes up their own habits that they see benefits them, and in this way they can differ to their teammates,' Conde said to close the interview.