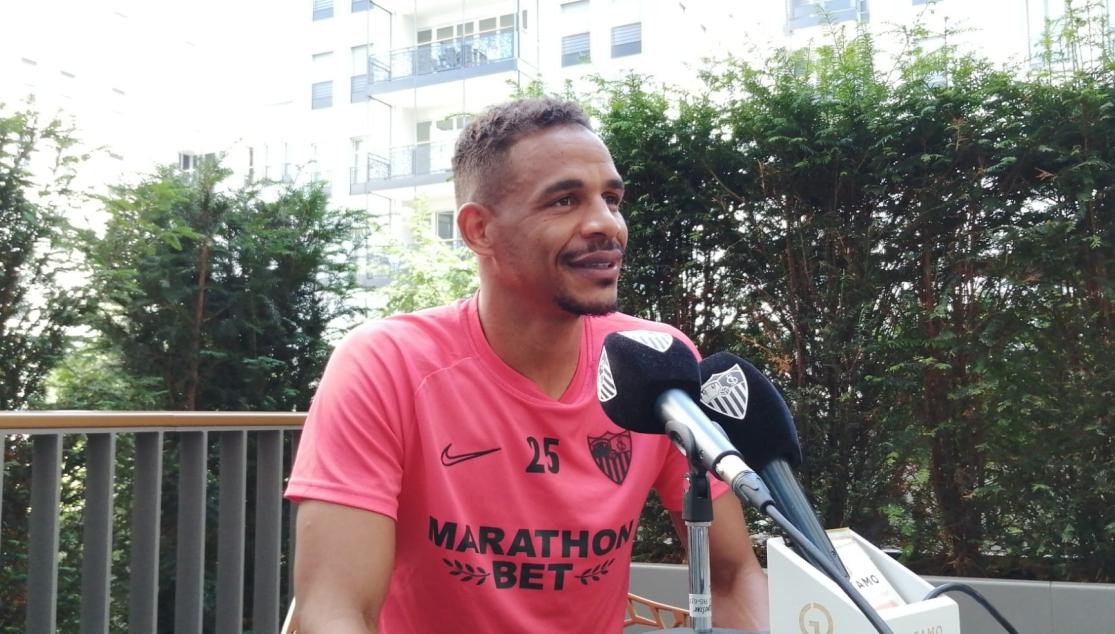 FERNANDO: "WE'RE THINKING BIG AND WE WILL FIGHT TO BE IN THE FINAL"

The central midfielder says he no longer has any knocks and is dreaming of a second UEL win, after winning it in 2011 with Porto

Fernando Reges is one of the most experienced players in the squad. He has lived through some hugely demanding situations, but as he told Solo el Sevilla on SFC Radio today, he is more ready than ever: "It's a very important match for us. We are very happy to be in the semi final and we're also thinking a little bit ahead because we want to be in the final. It will be tough because it's Manchester United, but we're ready".

Of course, he spoke about the return of Gudelj and the welcome he received: "It is a great joy for everyone because he is a teammate who was going through a moment that nobody wants to go through, but he is already with us and he is in good health, which is the most important thing. We have a squad with very good people, we're all very united and that helps us a lot on the pitch. We have to continue like this to achieve what we want, which is to win it". Undoubtedly, he is aware of the strength of our opponents: "It will be very difficult against a great rival, but we're ready. We are in a moment of great confidence and we know that they are also strong, but we're thinking big and we will fight to be in the final".

On a personal level, he also assured us that he no longer has any knocks: "I finished the season with a niggle in my knee but I've recovered well. I had another knock against Roma but in the next match I didn't. I feel well physically and mentally and I want to help the team. Diego Carlos and Koundé are very good. It's easier for me to play with them, they play simply and with speed and that helps a lot. They are two players who are always going to be at the top level".

"It's easier for me to play with Diego Carlos and Koundé. They play simply and with speed"

Fernando knows Manchester United well from his time at arch-rivals Manchester City: "It's always difficult against them. They are in a very good run of form and with Bruno Fernandes they're even better. They have a lot of quality with Pogba, Martial and Rashford and they will try to make it difficult for us, but we also have quality. We're always thinking about United. I have already won this cup, but I want to do it again and there are many teammates who haven't won it. We're focused".

The Brazilian midfielder wants to add to his Europa League win: "In 2010/11 I had a very good moment with Porto, a very similar side to this one and we won the Europa League. We have that possibility because of the mentality we have. The group deserves it, it will be difficult, but we're ready". He also spoke about the role of his teammates in the stand: "It always feels like we're playing at home because those that aren't playing help so much, it does help. If we go through a difficult moment, they'll give you more support to keep going. The team is making the difference and we want to continue like this. They all support and help, but they're ready if they have to come on and help".

"With the help of our teammates from the stands, it always feels like we're playing at home"

He also had praise for Lopetegui: "He's giving us a lot of confidence. He is happy and excited to achieve something big. We've qualified for the Champions League but we also want this final and I hope that on Sunday we can play well, win and dedicate it to the manager". To finish, a wink to the fans: "We would all want the fans to be here with us. It's something we can't control, but we can work and do our best on the pitch to get to the final. We will feel that they're not here, but we know that there is no possibility and we have to focus on doing things right and if possible, winning. Later on, the fans will be with us but now we have the team on the pitch to win".