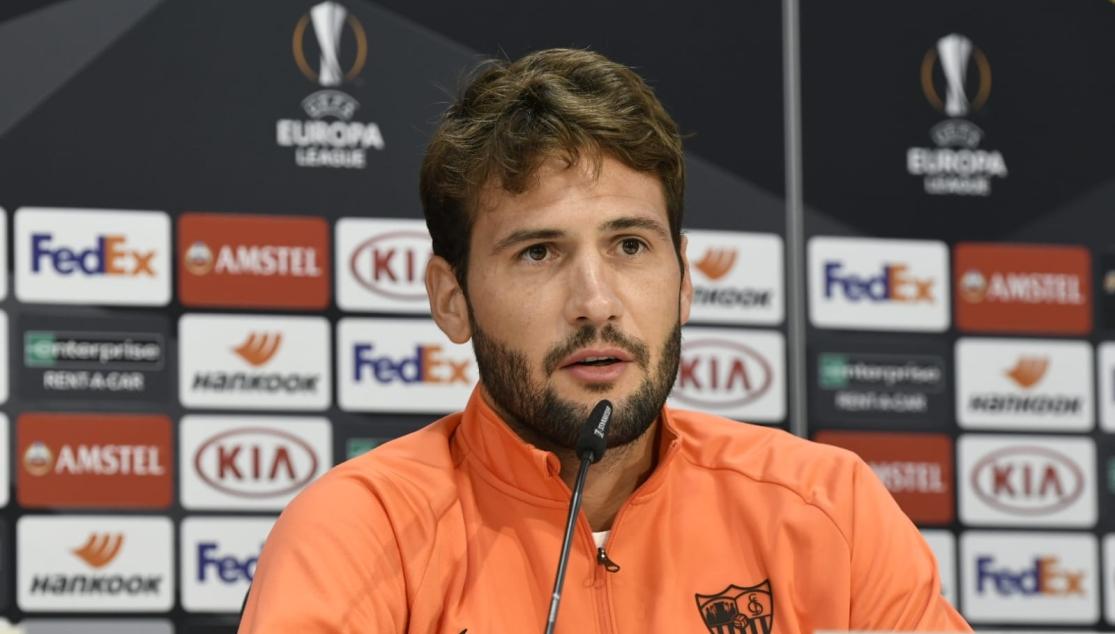 FRANCO VÁZQUEZ: "IT'S ALWAYS GREAT TO PLAY FOR SEVILLA IN THIS COMPETITION"

"I hope we play well, that people enjoy it and that we win"

After this morning's training session, Mudo Vázquez was the one to join Julen Lopetegui in the official pre-match press conference before the UEFA Europa League fixture against Dudelange tomorrow. The Argentine emphasised that "it's always great to play for Sevilla in this competition. I hope we play well, that people enjoy it and that we win".

"I'm happy to have played 100 matches in La Liga because it's not an easy thing to do. I'm happy and proud to wear this shirt. I'm still very excited to play and to being whatever I can to the team, so that this club can continue to grow. I hope we can achieve great things and go as far as possible".

"This could be the best squad we've had in years; there's a lot of competition and it's good for everyone"

Vázquez analysed his own game: "I always try to give my all on the pitch. I've had good games and bad games, just like everyone, but I always try to give everything I have. Not everyone is going to like how I play, but I'm happy with my performances. This could be the best squad we've had in years, or on par with the one we had with Sampaoli. There's a lot of competition and we're all going to get chances to play in the three competitions, it's good for everyone".

The midfielder spoke about how more confident he feels the more minutes he plays: "Everyone always wants to start every game, but I work day in day out, and I have faith in my game that I will give my all for however long that may be, even if it's only for twenty or thirty minutes. In the long run I know I'm going to play a lot more".

"I hope we can win a trophy this year; I've lost in all the finals I've played here so far"

To finish off, Mudo spoke about what the UEFA Europa League means for Sevilla FC: "We know that the club made itself in the Europa League; however, there are many good teams in the competition and we have to always give a good account of ourselves. I would love us to win a trophy. All of the finals in which I've played in since I arrived here, we've lost. But this is in the past, it's forgotten about and I hope that this year we can change this".

First team
THE BANEGA FAMILY, WITH THOSE MOST IN NEED IN ROSARIO DURING THE PANDEMIC
Leer más
END_OF_DOCUMENT_TOKEN_TO_BE_REPLACED