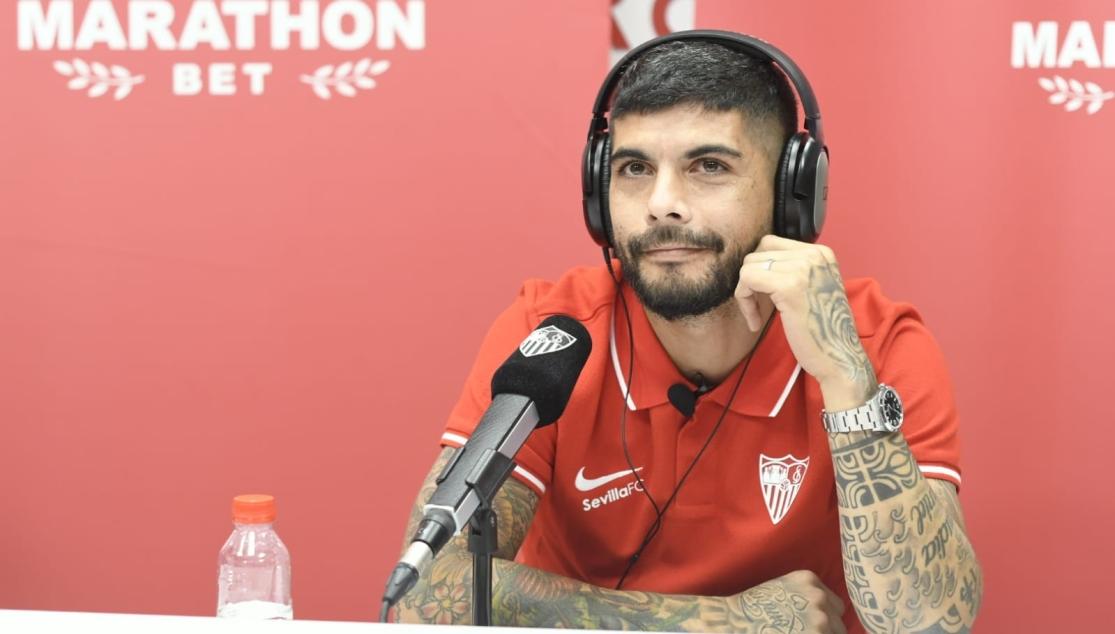 ÉVER BANEGA: "I AM MAKING HISTORY WITH THIS CLUB AND IT'S A PRIVILEGE"

"They always say that the second time around is not as good, but I'd beg to differ"

Éver Banega, Sevilla FC's centre-midfielder visited the SFC Radio and SFCTV building this afternoon where he learnt a bit about how everything works behind the scenes at the club. In addition, he gave an interview where he was sincere and at some stages emotional, as he opened his heart and spoke about his time at the club, the enjoyment of playing in front of the fans and the trophies won.

The man who hails from Rosario, who recently played his 200th game in a Sevilla jersey, put himself into Sevilla's history books for the 21st century and started the interview by saying: "I'm honoured. My time here started off in quite a difficult way, but I got a fresh start and now I have been playing here for several seasons - it's something that doesn't happen every day. It's great to be here at Sevilla FC, it's now my fifth season and I'm enjoying it as if it were my first. I'm working hard every day so that I can play as much as possible".

"The best memories have to be the ones from the finals, but the night we drew with Liverpool at home was just as special"

"Everyone wants to win things. The most beautiful memories are when you win the finals for example. At our place, the draw against Liverpool was also special, because after conceding those goals, we didn't let them out of their own half. On a personal note, my free kick in the final of the European Super Cup against Barcelona is my favourite goal, although unfortunately we lost that by the slenderest of scorelines".

"From the start, I knew as soon as I left that I wanted to return. It wasn't an easy decision to take to leave the club, but I wanted to leave peacefully and to take on a new challenge. The World Cup came about and I wasn't playing. I knew that I should have been playing and then I decided to return to Sevilla to play more minutes. For me, my time at Sevilla has been one of the most important stages of my life. The club has given me so much love and support. Monchi and Unai were there for me when I needed them and I started to feel at home here and play with a smile on my face".

"I heard that people didn't want me there, but if you give everything on the pitch, the people will respond accordingly. I wanted to stay and I worked hard for the people to realise this"

Banega was sincere, and realised that some people were not happy and he wanted to show them that he deserved to play for Sevilla FC at the highest level: "They always say that the second time around is not as good, but I'd beg to differ. With hard work, anything is possible and the people appreciate that. Last season was difficult because I wasn't used to playing in that position, but I hold myself responsible. I had some difficult moments because I heard that people didn't want me. However, this season I am focused because I want to be hear, and I only focus on what is happening on the pitch".

"If you show what you're capable of on the pitch, the people respond. If I make a mistake, I will work hard to make up for it. I can't change my way of playing because I'm used to it by now. If people get angry because I take a risk, well then they better get used to it. I'm going to go and win the ball back, but that's just my way of playing".

"Whenever Monchi called me, I though about it for a day and a half. The club needed me back, and we hope that this project goes well"

The call from Monchi and his return to Sevilla

Monchi wanted to take part in the interview as well and came in to speak about Éver. After listening to Monchi's nice words, Banega explained how his signing happened: "I was still in Newell's at the time and he rang me and asked what I thought about joining Sevilla. I thought about it for an hour and a half and then I rang him - then the negotiations started. They were very long, but it meant I could leave Valencia when pre-season ended. The club needed Monchi to return, and now everyone is happy. We hope that this project goes as well as possible".

"I left home when I was 14 and I didn't return. I didn't want to leave, but I wanted to become a footballer. I shut my eyes and I left, but it was worth it"

Without doubt, one of the most telling parts of the interview was when Éver spoke about his past, and the moment he left his family to chase his dream of becoming a professional footballer. The emotion was clear to see from Banega as he told the story of how everything happened: "I left when I was 14 years old and I didn't return. I wanted to be a footballer. I didn't want to leave, I was on my sofa the day beforehand crying. I shut my eyes and I went. It was a tough childhood, but now when looking back on it, it was worth it. We were quite a large family and my father worked a lot, but there was always food on the table".

Banega recently brought up 200 matches in a Sevilla shirt and he received another message, this time from Frederic Kanouté. He's another player who has reached the 200 games milestone and just like Éver, he's a reference for what Sevilla stands for. Banega admitted that now, he is starting to see the importance of what is being done at the club: "I realise that I'm part of the important recent history of this club and honestly, it's a privilege to wear this jersey. Everybody wants to give their all and has time has went one, I feel attached to these colours".

The new project and Lopetegui's philosophy

Banega stated that, in respect to this current season: "We are very excited with the project. There's a lot of new players that are adapting well. Our objective is to qualify for the Champions League and I hope that that can be achieved. If not, we will continue fighting until the last game. The players that have been here for a while know what the club is all about and how it works, and they're all ready to keep on improving. This is all done with effort and hard work day after day. It's better that good players come here, we don't drop our concentration levels and that we are always alert".

"The gaffer's idea is to have good players here to play good football. We like to have the ball and we know when we need to be more direct and when not to be".

"We have to be patient with De Jong, as after he scores his first, a lot more will follow"

Sevilla FC's centre-midfielder finished off by speaking about two of his new teammates this season; the Argentine Lucas Ocampos, and the Dutch Luuk de Jong: "Ocampos is playing well and I hope this continues as, with his humility, he will keep up his hard work. We have to be patient with De Jong. He isn't scoring just yet, but the work he does for the team is great and he's consistent in it. He will score and once he gets his first, a lot more will follow".

First team
THE BANEGA FAMILY, WITH THOSE MOST IN NEED IN ROSARIO DURING THE PANDEMIC
Leer más
END_OF_DOCUMENT_TOKEN_TO_BE_REPLACED