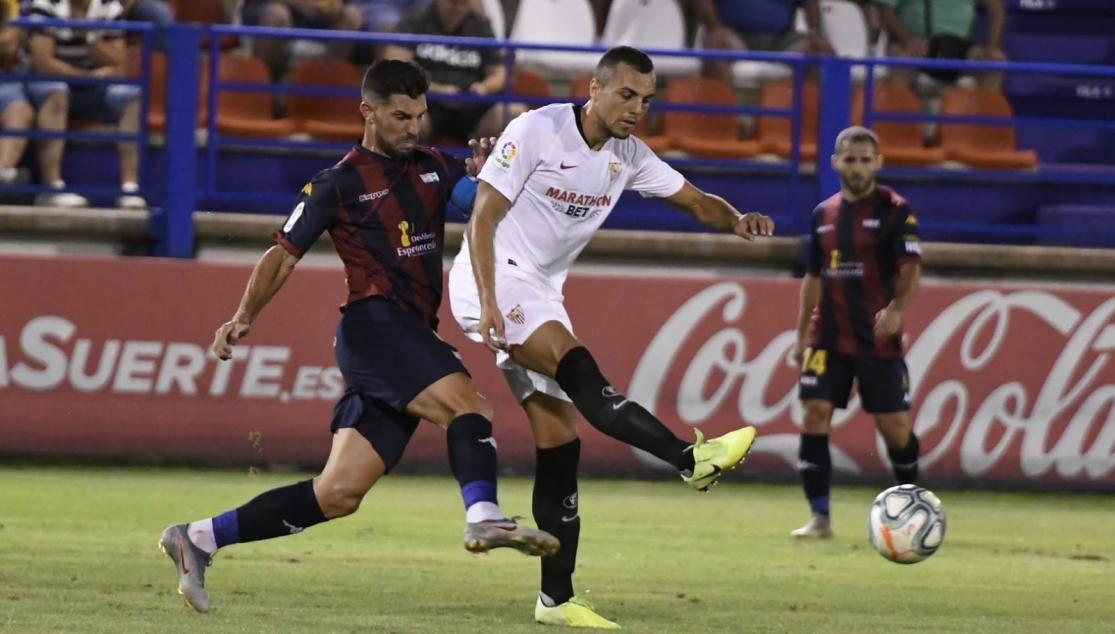 2-2: SET PIECES PAID OFF AGAIN, BUT IT WASN'T ENOUGH

Extremadura UD and Sevilla FC drew on a night for José Antonio Reyes. Headers from Kjaer and De Jong looked to have given Lopetegui's men the win, but the claret and blues equalised in added time.

Pre-season is never the moment to prioritise the scoreline, but even more so in a night like the one this Saturday. It was the day for José Antonio Reyes and he was the focus of the tributes, especially emotional both before kick off and in the 19th minute of the match. Once the ball got rolling, Sevilla had to come from behind with headers from Kjaer and De Jong, both assisted by Jordán. However, Pastrana's early goal and Álex López's last minute goal levelled the scores for a 2-2 draw.

The game began much more openly than the one against Granada, Sevilla playing both more vertically and smoothly on the wings, above all on the left, where Reguilón returned from injury and Bryan showed his typical self-confidence. However, after an early chance from De Jong, it was Extremadura who took the lead after barely eight minutes. An awkward ball from Kjaer to Sergio Rico and the keeper, surrounded, cleared the ball. His low clearance was intercepted by Pastrana, who was one-on-one with Rico and he placed the ball above him to make it 1-0.

Not long after kick-off, Extremadura took the lead through Pastrana

The goal didn't knock Sevilla down, it had the opposite effect. The Nervionenses used the ball well and transitioned quickly, but got stuck in the final third where there were too many defenders. Midway through the first half Jordán went close and then Bryan, just before half time, nearly equalised with a well-placed shot that Casto pushed away for a corner. From the resulting corner, taken by Jordán, Kjaer rose highest at the near post to equalise.

Sevilla started the second half with a double change, Sergi Gómez coming on at centre-half and Pozo, who came on at left-back, increasing the number of positions he has played in this season, until Chacartegui came off the bench a little later on. Sevilla were becoming more and more dominant and again benefited from a set-piece to take the lead around an hour in. Jordan's free kick was whipped into the box and met with power by De Jong, whose header beat Casto. This came just before a flurry of changes by the home side, bringing on six new players.

Like in Granada, Sevilla's goals came from headers at set-pieces

After the second drinks break, the game slowed down, although Sevilla continued to push for a decisive third goal. Ocampos and De Jong were very strong in the Sevillista attack, against an Extremadura defence that looked unsettled after so many substitutions in one go. There was barely any time left, but in added time, Álex López equalised with a rebound at the far post. The team returns to work on Monday to finally begin to think about the first league match at Cornellá-El Prat against RCD Espanyol.

STORY OF THE MATCH