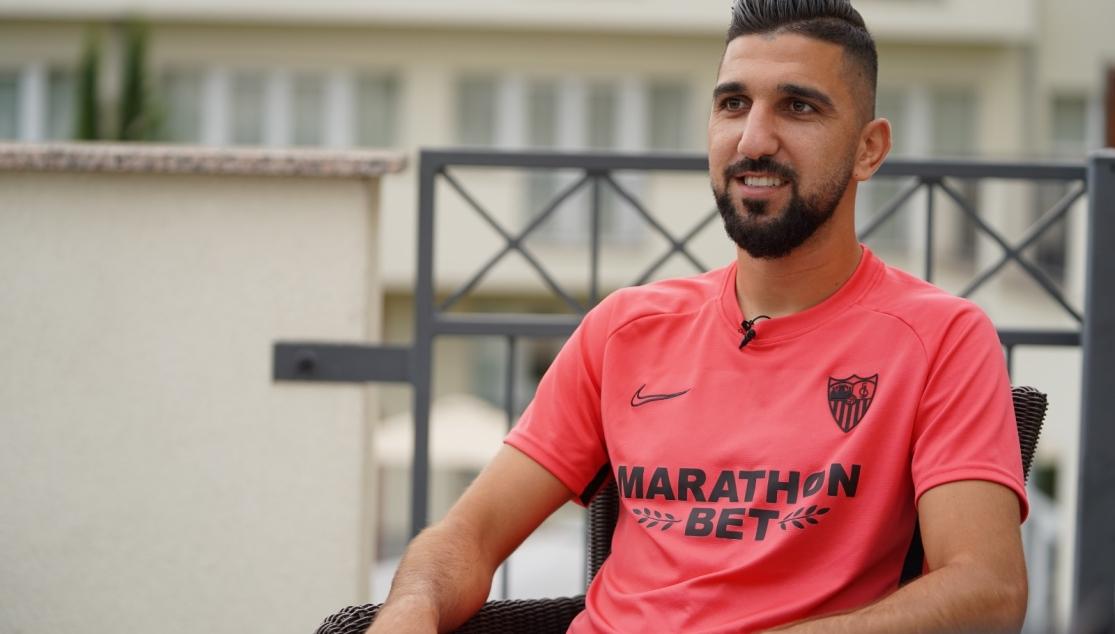 DABBUR: "STRIKERS ARE HAPPY WITH SO MANY MANY OPTIONS UP-FRONT"

Speaking to SFC Media, Dabbur said he had noticed a change in intensity compared to the Swiss and Austrian football

Munas Dabbur was the first official signing for this season. It was announced in January and saw Dabbur continue to compete in Austria until joining the team this summer. After a lot of imagining what this new experience would be like, the Israeli is now enjoying it: "The sensations are very good and I'm very comfortable with the group. It's another level and I hope to be able to give my best here in Sevilla". The attacker confirmed to Club media that his predictions have been confirmed: "Honestly I haven't been surprised. I knew that I was coming to a big club and I knew the level of the players. The group is good and I'm not surprised, but I'm very happy to be able to share a changing room with these players".

Lopetegui is testing him in new positions, and has even played Dabbur at left-wing: "It's not a position I've played before, but as a striker I have to adapt and I'm happy because I think it went quite well. In this system I see that I can also play there". In addition, he is clear that here he can continue his progression: "I think I come at the best time after two good seasons in Austria, but I think I still have not shown my best and to do so I have to work more and continue to improve. The Swiss and Austrian leagues are different, a different level with all due respect. It's not easy and it's true that I was the top scorer. I'm not thinking about becoming top scorer in LaLiga, but about focusing, working hard for the team and scoring goals, but first I want to adapt".

The language is a handicap at the moment, but he is clear that he will overcome it soon: "I get along well with everyone, although it's true that I'm trying to adapt to the language and that's why I get along better with Ben Yedder and Munir, who also speak Arabic, or De Jong and Wöber who speak English. I'm also integrating well with the rest". He also defined himself as an out-and-out attacker: "I don't like to talk about myself, but if I have to define myself as a striker, I'd say I can play alone or as a second striker, an attacker who is always looking for the shot and who also likes to create chances for teammates".

He also spoke about his teammates, such as De Jong: "He's another type of striker, bigger. Liking to play with his back to goal and quality in the air. He's different from me, but I like his game and we can get along very well"; and Ben Yedder: "I didn't know him before coming here but I followed him a lot and he has quality, he plays with or without the ball and creates a lot of danger in front of goal". He also had words on academy player Carlos Fernández: "We have only trained together four or five times but he has a lot of quality and a strong left foot. He has a lot of potential and I look forward to playing and training with him".

Dabbur confirms that Lopetegui's style is very popular with the players: "As strikers we are happy to play with so many people up there because there are so many options to create chances. We're learning the system, working hard and as a striker these systems give you more options to be close to the area and generate more chances to score". As for the intensity, he already notices differences: "I come from a club that played with high intensity, but there is a difference. Here it's a little more, but I'd emphasise the quality of the teammates because it's incredible and allows you to learn something every day".

"You can tell the intensity is higher here"

On his objectives: "The objectives are to become an important player here as soon as possible, to help the team, to score goals and maybe win a title". And to finish up, he spoke about the Club anthem and was tested on his Spanish: "When I was watching the Cup match against Bilbao I heard the anthem and it's incredible... To say something in Spanish it may be too soon, but I can say Vamos mi Sevilla and muchas gracias".