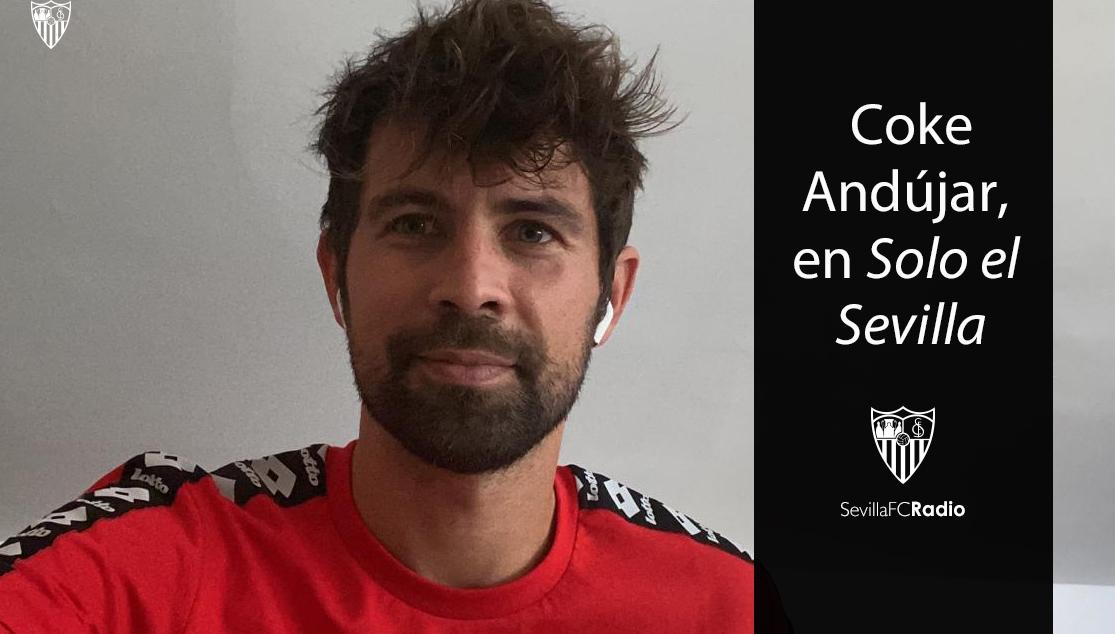 COKE: "WHEN I SEE THOSE PHOTOS AND REMEMBER THAT NIGHT, I THINK THAT EVERYTHING TURNED OUT PERFECT"

The man from Madrid, who scored a brace in the Europa League final win four years ago, spoke to SFC Radio on Monday

Coke Andújar featured on SFC Radio today, the fourth anniversary of the unprecedented fifth UEFA Europa League win in Basel: "I remember it as a perfect day where everything went well, and scoring two goals in a match with so many repercussions. I played further forward in Basel and my mission was to be up there. For my first goal, I saw the chance and fortunately for me it went in. For the second, the build-up was much better for us, I made space for Banega, he cut the ball back and the rebound fell to me. I knew I was in offside position but it was a rebound, so I hit it as hard as I could and it went in. There was a very nervous moment because we thought it would be disallowed, but the referee knew it had come off an opponent".

The way of looking ahead to the second half was, without doubt, key for the happy ending: "We couldn't let it escape. Given the occasion and the opponent, the second half we played was maybe the best half in my five years at Sevilla. It all began with the move by Mariano which Gameiro scored, and then we moved forward after having to suffer in the first half. We became more confident and then thought it would be difficult for them. The mental aspect had a lot to do with it".

The right back knows what links Sevilla to the Europa League so much: "It seems easy to say it after winning five of them, but the fans get excited with this competition and Sevilla has given so much to it, that the same competition gives you highlights back. Moments that could go either one way or the other, but it goes Sevilla's way many times because they want it. Unai said this to us a lot".

"Many times, things go Sevilla's way because they want it"

Coke things a lot of the responsibility for these successes to the dressing room: "Of those three seasons, in two of them we didn't win until the sixth match of the season. They were new sides and I remember that we would meet in the dressing room and we spoke to think how we could improve. We had a manager who understood us and when you have someone you can trust, you'll always be prepared to overcome obstacles".

The knowledge of Turin and Warsaw helped the side in the build-up to that match: "You get no second opportunities in finals and you have to go there with everything. Maybe they started off as favourites because of their honours, the number of their fans and the great side they had, but we came into it on the back of winning it twice in a row and we were on a very important path. After they went into the break 1-0 up as the better side, when they see the start of the second half and we equalise after just one move, it's a huge hammer blow. We became more confident and we were more at ease, with good plays and chances. It was difficult for them to overcome".

Although Sevilla fans were hugely outnumbered, they were the only fans you could hear: "I remember on the flight home we were going crazy about that noise. They had more than double the number of our fans, but what you could hear were Sevilla chants. In the second half, both on the pitch and off it, it was all Sevilla".

Taking a look back, Coke thinks he knew how to enjoy those moments: "You feel satisfaction for what we did, pride and privilege too because when I began playing, reaching the first team with Rayo when they were in the Second Division B, in my life I was dreaming of those moments, not playing in the top-flight nor in Europe. I was lucky to win three consecutive Europa Leagues with a dressing room that I could not have enjoyed any more than I did. It's impossible to savour it more. When I see those photos and I remember that night, I think that everything turned out perfect".

Sevilla will always be in his heart, and it's a place he frequently returns to: "I enjoyed it so much there, I have many friends there and whenever I can, I return. The city left a mark on me and it's where I developed professionally to the top level. I was able to do well and I enjoyed it, I had a good time and with people who I consider my friends. You can't ask for more".

To finish, he hopes for the best possible end to the season for the team, and did not rule out another trophy: "I hope so. I will be supporting them like anyone else from afar. They have players who make the difference. Then, it's the luck of competing at the exact moment, being prepared for things to fall your way and taking opportunities. They were set to have a good season in LaLiga and the UEL before the break. I don't know why it'll be any different now. Hopefully they can do it".

First team
ALFONSO PASTOR: "LOPETEGUI TRIES TO HELP US IN EVERYTHING AND GIVES US ADVICE"
Leer más
END_OF_DOCUMENT_TOKEN_TO_BE_REPLACED