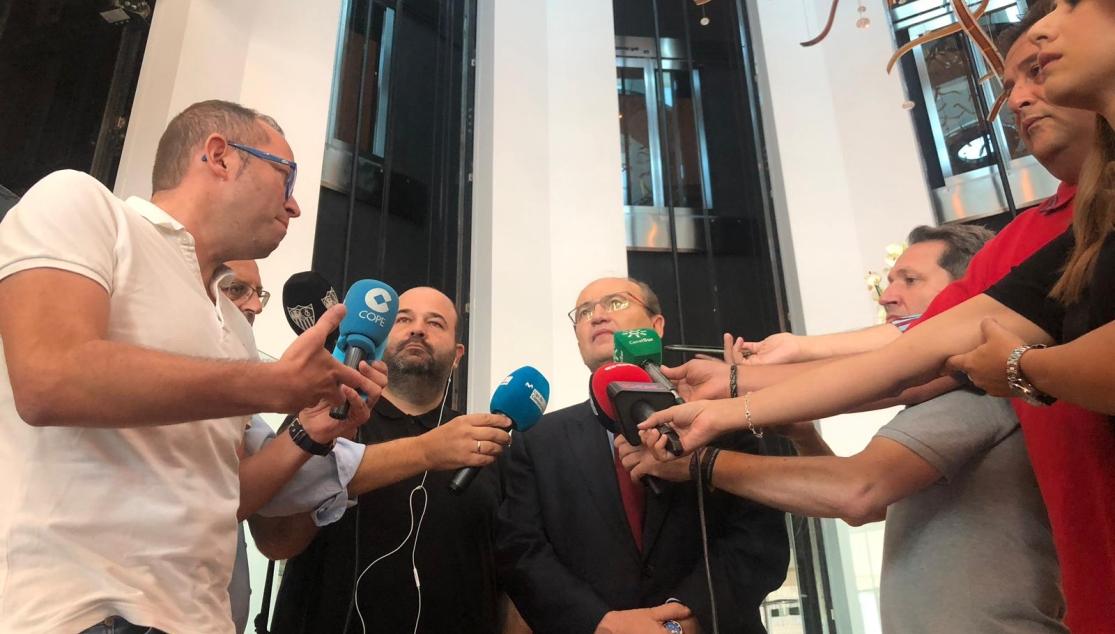 CASTRO: "WE'RE FEELING GOOD AT THE MINUTE AND WE HOPE TO CONTINUE THIS FORM IN EUROPE"

José Castro spoke to the press in Azerbaijan this morning, from the team hotel in Baku. He was very clear that this is always an important tournament for Sevilla FC. "Tomorrow the Europa League will start again for us, and it's always a competition we want to go far in. That being said, we know there are plenty of great teams in the competition such as Porto, Arsenal, Roma and Manchester United to name but a few".

After a good start to the league campaign, it's now about transferring that form over to the Europa League: "We have had a magnificent start to LaLiga, however we do realise that only four games have been played. The reality is that we are feeling good and that we hope to continue this good form and bring it into our Europa League campaign. It is a long and hard campaign and there's no telling what is going to happen between now and May, but we will give our best to be in the latter stages of the tournament".

Castro showed his satisfaction at the work done over the summer: "It was a tough pre-season, with a lot of changes and things to do. Economically, we invested big to make these changes and we are happy with how they turned out. However, only four games have been played and a lot of things can happen. We have a serious team with lots of quality that will try to fight for everything".

Nothing is ever ruled out, but it's important to be realistic: "I'm very excited by how the team is playing. Even in pre-season it was evident, it made us think about the squad and also about the players we had for the regular season. It must be an exciting campaign because Monchi has worked very hard and we have to be optimistic. As always, having respect for the rival is essential, because without respect there's no victory".

"It must be an exciting campaign and we are optimistic"

Speaking about Lopetegui, Castro says that he seems very focused on the objectives: "We speak and meet a lot. He's happy in the city, with the facilities and the way of working here which is perhaps different to that of Real Madrid or the Spanish national team. We are very close and I can see he is happy and wants to succeed. I hope it's a great season for everyone and that we achieve our objectives. We are ambitious, we want to do as well as possible but, as always, we can't get ahead of ourselves".

Castro knows the importance of doing well in this competition for this club, and isn't looking beyond that: "We are obligated to go as far as possible because we are Sevilla, the team who have won the competition the most. However, the competition in this campaign must be noted and we must keep our feet firmly on the ground. We aren't looking any further ahead than Qarabag. The game against Madrid isn't what is important to us right now, even if it is in just a few days time".

In addition, he warned that tomorrow's opposition must not be taken lightly: "They aren't leading their league due to luck, and only a few years ago they held Atlético to two draws in the groupstage of the Champions League. We must respect everyone, more so when we play in their stadium because every team gives a little extra when playing in front of their own fans". To finish off, he spoke about possible changes to the team: "That's a question to ask the coach; it's a large squad and we'll need it now we are playing every three days. I'm sure Lopetegui has thought about rotating so that as many players as possible get game time under their belts, but again this is a question that only the coach can answer".

First team
THE BANEGA FAMILY, WITH THOSE MOST IN NEED IN ROSARIO DURING THE PANDEMIC
Leer más
END_OF_DOCUMENT_TOKEN_TO_BE_REPLACED