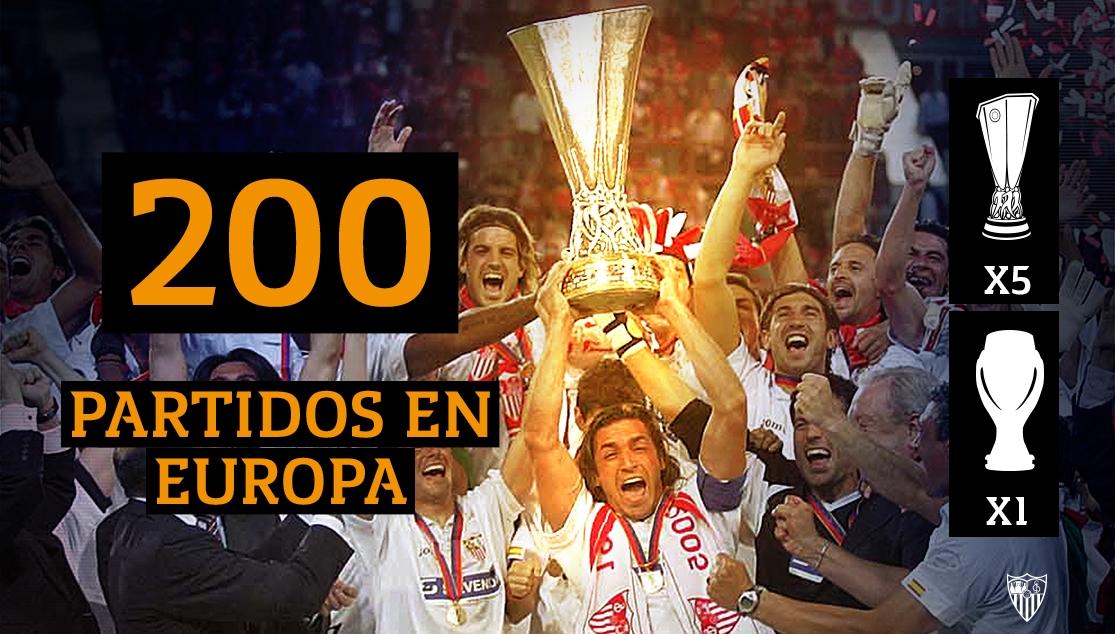 The match on Thursday evening against Dudelange was the club's 200th match in European competitions: 137 in the Europa League, 52 in the Champions League, five in the European Super Cup, four in the Inter-Cities Fairs Cup and two in the UEFA Cup Winners' Cup

Perhaps those that attended the match in Nervión on the 19th September 1957 were aware that they would be witness to the start of a magical European journey for Sevilla FC; or perhaps they were not. Staying with this match in question; which was played against Benfica in the European Cup towards the end of the 50s, it started the journey to this round figure, 200, that we have reached now. After their comfortable win in Luxembourg against F91 Dudelange, Sevilla FC have brought up the magical number of 200 official games played in European competitions. It's a run that started in the 20th century, and finished off with the club playing thirty games in that century throughout the European Cup - now the Champions League, the UEFA Cup Winners' Cup, the Inter-Cities Fairs Cup and the UEFA Cup - now the UEFA Europa League. However, the real start to our magical history in Europe started in the 21st century, which has led to Sevilla FC becoming a European footballing giant.

The 170 games played, since that game at home against C.D. Nacional, has seen Sevilla FC become one of the biggest clubs in Europe; with five Europa League trophies and a European Super Cup in their trophy cabinet. Over their 200 games they have a positive record in total; as they have achieved 108 victories, 41 draws and 51 defeats. That is to day that in over half of the games that Sevilla have played in European competitions, they have came out victorious. A lot of the victories are memorable; some because they led to the six triumphs, and others because of the amount of goals scored by the team. Their biggest winning margin came as recently as last season, when they beat Akhisar Belediyespor 6-0. Following closely behind are the victories over OFK Titograd (6-1 away from home) and the 5-0 wins over Śląsk Wrocław, during the 2013/14 season, and FK Žalgiris in 2018.

Sevilla have played 170 of their 200 European matches in the 21st century, with the other 30 being played before the turn of the millennium

Other games, whether or not they ended in victory for Sevilla FC, are still remembered fondly by the fanbase. These include: the one when Suker scored in Pireas, when Mbia scored an unforgettable header, the penalty shootout in the Villamarín, and, obviously, the game when Antonio Puerta scored against Schalke 04. We have arrived at this point through the spirit of the Sevillistas, from the grandstands to the pitch - which has played host to many great players. When looking at numbers, the tireless Jesús Navas leads the way in respect to the most European games played in a Sevilla shirt, with 79 matches. He leads the way from Banega, Kanouté and Luis Fabiano who have all played in 52 matches. In fifth position is Palop, with 51 games under his belt. Moving on to goals scored, it's Kanouté who leads the way with 28 European goals to his name. He is followed by Ben Yedder (22), Gameiro (20), and Luis Fabiano (18).

Playing 200 games in European competitions has meant that Sevilla FC have travelled around the continent a bit. However, the country where they have travelled to most often is, in fact, Germany. Sevilla have played 22 games on German soil, and against 10 different clubs (which is a record in that category too). After Germany, in terms of in which countries Sevilla have played most, the rest of the top 5 looks like this: Spain (19 games), Portugal (17 games), Russia (16 games), and England (15 games). When talking about the number of different clubs played against from the same country, after Germany (10) comes: Spain and England (8), and then Portugal (7). In terms of opponents faced, the team that Sevilla FC have faced most often in their European history is FC Zenit Saint Petersburg.

Sevilla FC have played no team more times in Europe than FC Zenit Saint Petersburg, with a total of six meetings between the two sides

The two teams have faced each other on six occasions, over the course of three different seasons: 2004/05, 2005/06, and 2015/16. Zenit are followed by Standard Liege (5), and then a group of eleven teams whom Sevilla have had the pleasure of facing on four different occasions: Borussia Mönchengladbach, Glasgow Rangers, Maribor, Real Madrid, FC Barcelona, PAOK FC, Juventus, Porto, SK Slavia Prague, Fotbal Club FCSB and Shakthar Donetsk.

Furthermore, Sevilla FC are assured of at least four more games in Europe this season: the two to close out the group stage, and the two they will play in the Round of 32. The, at worst, 204 European encounters that Sevilla will have played before the season is out, puts them in fifth position overall for games played by Spanish clubs in Europe. They are some way ahead of sixth placed Athletic Club, who have played 172 games. That being said, they find themselves behind FC Barcelona and Real Madrid who have both already played more than 500 games in European competitions. In third and fourth place lie Atlético Madrid and Valencia, who can both count on more than 300 games. However, if there ever was a team who had no fear of breaking the 'unbreakable' barriers, that team would be Sevilla FC.

First team
THE BANEGA FAMILY, WITH THOSE MOST IN NEED IN ROSARIO DURING THE PANDEMIC
Leer más
END_OF_DOCUMENT_TOKEN_TO_BE_REPLACED