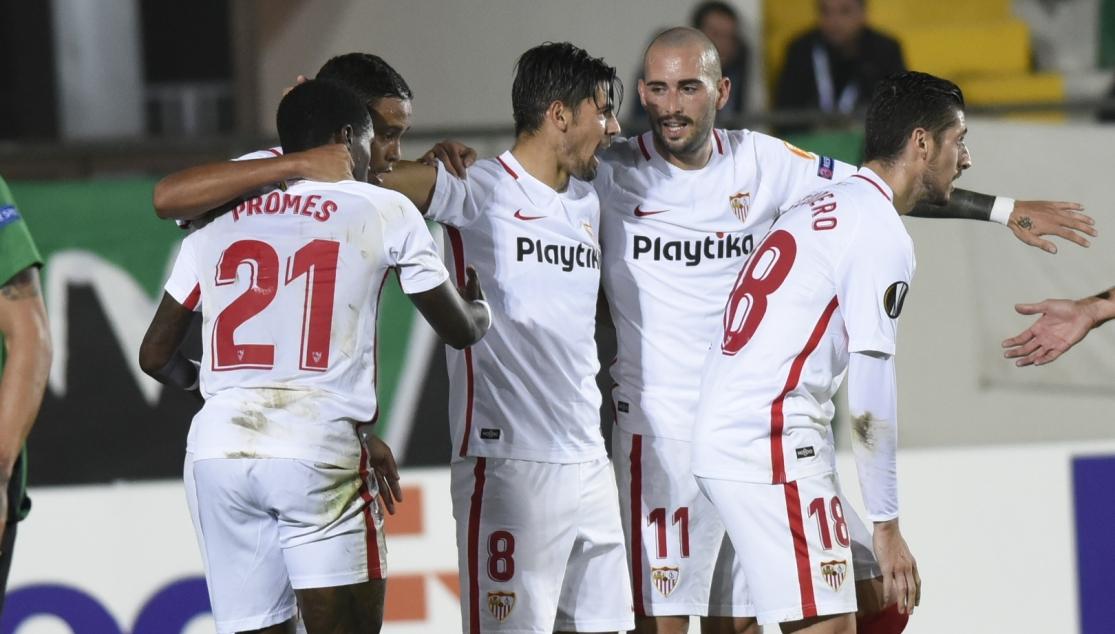 2-3: A BACK-AND-FORTH GAME IN TURKEY ENDS IN A SEVILLA WIN

Sevilla FC went into the break 2-0 up and ended up winning 3-2 after being at 2-2 and playing with a man less for more than half an hour with Sergi Gómez' sending off. The Nervionenses cement their first spot in the group, tied with Krasnodar on nine points

Sevilla FC were forced to fight hard for the win this evening in Akhisar. A first-half which Sevilla dominated to bring a 2-0 lead into the break gave way to a second-half in which Akhisarspor levelled the score and went for the win. A man down down from the 55th minute, Banega converted a penalty to move Sevilla onto nine points in the group and move closer to qualifying for the Round of 32.

Sevilla took ten minutes, almost the same as in the match at the Sánchez-Pizjuán, to open the scoring after two warnings from Aleix Vidal and Nolito. It was Nolito who opened the scoring, finishing off a cross from Muriel. This relieved Sevilla of any possible pressure, given the hosts intentions in the first-half were to be compact and not give away chances, and they only threatened with a couple crosses which Amadou and Gnagnon cleared.

A good assist from Muriel for Nolito and another great dribble from Promes, which the Colombian finished off, put Sevilla in control of the match in Akhisar

The second goal started right off from the goalkeeper, with Vaclik finding Banega to lead the counter-attack. The ball was played to Franco Vázquez who played it into Promes, whose great dribble and shot, blocked by the defenders, trickled towards the goal and was finished off by Muriel in the 38th minute which left the game in Sevilla's hands

However, ten minutes into the second half, the match changed completely in a way that no one in the Toto Spor Stadium could have possibly expected. Manu went on a solo run in the 52nd minute from almost the halfway line, going past Amadou and Gangnon, before finishing past Vaclík, putting the wind back in the Turkish sails. Barely five minutes later, Manu once again got in behind the Sevilla backline, winning a penalty from Sergi Gómez, resulting in a second yellow card and a sending-off for the centre-back. Sevilla were saved by Vaclík’s right-hand post which deflected Vural’s penalty away from danger, but the Spanish side continued to struggle as the home side had a series of chances. Barbosa first shot over from inside the area and later forced the Sevilla goalkeeper into a save.

After the Turkish side had equalised, Banega converted a penalty which Franco Vázquez won and confirmed the three points for Sevilla after a major scare.

The Turkish side continued to press for a reward where there previously seemed to be none, at least from what happened in the first 45 minutes. A defensive change from Pablo Machín by bringing on Roque Mesa did not calm the Sevilla nerves and from an Akhisar cross from the left, Ayik, who had just come off the bench, headed in the equaliser to the delight of the home fans. There were 12 minutes left until the end of the match and with the momentum firmly with the hosts, Sevilla FC began to find their composure once again. The home side continued to push for the win in front of their fans and this allowed Franco Vázquez to escape down the left-wing, eventually being brought down in the area by Miguel Lopes after a dribble. Banega capitalised on the opportunity to seal, albeit, a highly laboured win.

Krasnodar’s win against Standard Liège, who Sevilla play next in the fifth game of the group stage, paves the way for Sevilla to move onto the next round, with the Spanish side staying at the top of the group on nine points together with Krasnodar and with Standard on six points.

First team
THE BANEGA FAMILY, WITH THOSE MOST IN NEED IN ROSARIO DURING THE PANDEMIC
Leer más
END_OF_DOCUMENT_TOKEN_TO_BE_REPLACED 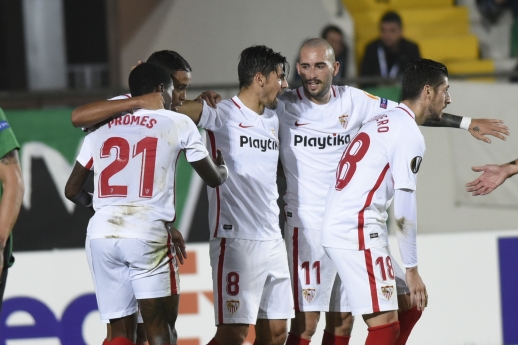