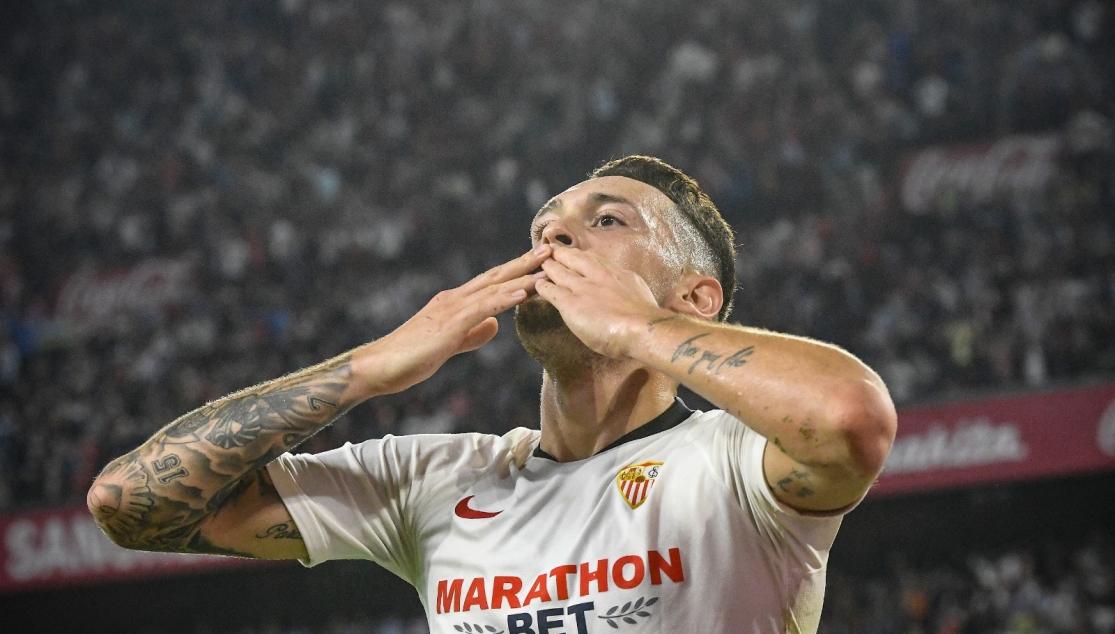 2-0: SEVILLA FC DOMINATE GETAFE FROM START TO FINISH AND LIGHT UP THE SÁNCHEZ-PIZJUÁN

Chicharito, with his first league goal for Sevilla FC, and Ocampos get the three points for the team from Nervión

Sevilla FC recorded a solid and resounding victory this evening against Getafe CF, and it was one which lit up the Sánchez Pizjuán. Sevilla dominated from start to finish, and completely nullified the Madrid-based team. It was three well-deserved points for Sevilla in the Sánchez Pizjuán, and a victory which moves them up the table.

It was a bit of stop-start first quarter of an hour, as Nyom and Molina had to be attended to after a collision early on. Both teams shared the ball for this opening period to no great effect. Ocampos was the one who started to make things happen in the game with the first attempt, as he entered the box and beat Raúl García, only to watch his left-footed strike whistle over David Soria's bar.

Another effort, and this time it was Nolito with the shot which forced a save out of the Getafe 'keeper. Nolito then had another good chance, but his shot which was at a good height for the David Soria, was saved well to deny Sevilla going 1-0 up. Lopetegui's men dominated the ball until the break, and Getafe's only real effort of note came through Mata, which didn't give Vaclík much to worry about.

The second half started much like the first one ended: with Sevilla FC camped inside the Getafe half, knocking the ball from side to side and looking for an opening. A Banega through ball to Chicharito left the Mexican one-on-one with the goalkeeper, but his shot was straight at David Soria and therefore the game remained goalless. Five minutes later, Banega himself had a shot which came of the inside of the post and, somehow, didn't have the luck required to go over the line.

However, it would only be a matter of time before the goal came. With Mudo Vázquez recently coming on to the pitch, Sevilla pushed down the left-hand flank. Óliver, with a gorgeous pass from the outside of his right foot, sent Chicharito through on goal and the Mexican, once he set himself, made no mistake as his shot flew past David Soria to open the scoring for Sevilla FC - a goal that the Mexican richly deserved.

However, Sevilla weren't done there. They didn't take their foot off the gas and continued to camp Getafe in their own half. The visitors, who changed up their system and after one of their misplaced passes was intercepted by Jesús Navas, the end of the game was in sight. The captain played Ocampos through on goal with a pinpoint pass and the Argentine, with only the 'keeper to beat, finished it off in style and made sure that the three points stayed at the Sánchez-Pizjuán.

Getafe, who didn't have much to shout about throughout the match, were dwindling with every passing minute and were waiting for the game to end. Lopetegui's men enjoyed another home victory - their third on the bounce in La Liga. Now, their attentions turn straight away to the away match on Wednesday evening, against Valencia in the Mestalla.