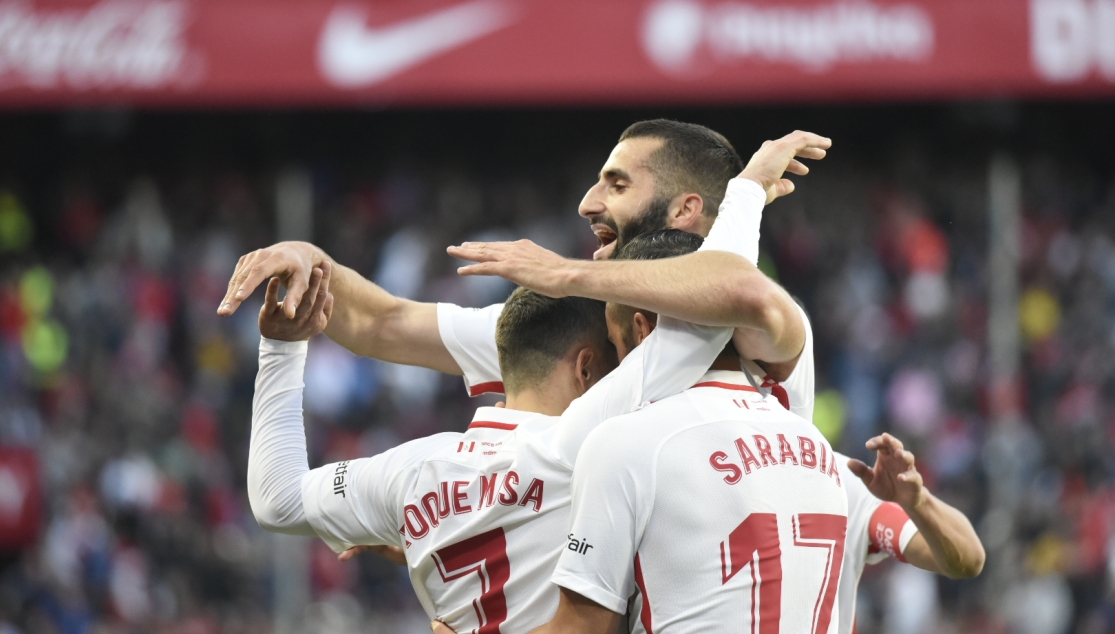 2-0: A CALM, COMPOSED WIN AGAINST ALAVÉS

Sevilla FC gifted their fans a drama-free win after the painful defeat on Sunday against Valencia. Sarabia came back with great effect, providing one assist and scoring a goal which made him man of the match. Despite Valencia's win yesterday, Getafe's slip up has the Champions League places one point away

They had to win and Sevilla made no mistake in the Ramón Sánchez-Pizjuán this Thursday night. In a game which had a surprisingly slow start, Sevilla displayed their quality and the chances in the first half had their reward with Roque Mesa's goal before the break. And with the scoreboard in their favour, Sevilla's intelligence and patience resulted in Sarabia getting a goal to wrap up the win. The midfielder returned from injury and had an immediate impact, bringing his tally for the season in La Liga to 10 goals and 10 assists, the first player to reach 10 in each stat after Lionel Messi. There are eight matches to go and one point separates Sevilla from fourth spot, keeping the fight for fourth alive.

It was not an easy start for Sevilla who, despite having possesion, could not breach Alavés' strong defence. Munir had two chances to open the scoring but Alavés remained firm. Franco Vázquez would have a chance a minute after but the Argentine could not make the most of Ben Yedder's clever pass. Caparrós' team were imposing themselves on the game but Alavés were resolute in defence and awaited the chance to counter-attack. They had few chances to do so fortunately and the Nervionenses kept attacking throughout the half.

Munir had a great chance after a cross from Sarabia but the striker could not convert the header and it went over the bar. Alavés had barely attacked in the entire game but a moment of incertainty in Sevilla's defence almost turned the game around. The ball stopped dead in the box and Calleri beat Kjaer and Soriano to it, however the goalkeeper managed to turn it round for a corner. Sevilla upped the pace after that, determined to break the deadlock. After many blocked crosses, Sarabia received the ball in the box with four minutes to go and played it back to Roque Mesa who fired it into the top corner. Jesús Navas and Escudero were both booked before the break, both of them now suspended for Sunday's game.

Alavés knew that they had to attack to get something out of the game and they changed their gameplan and pushed up the pitch. Caparrós was intelligent and sent the team on the hunt for the second goal to kill the game. They had immediate chances to after the break when Munir sent a shot over and Ben Yedder almost snuck a shot in at the near post. The game slowly began to heat up and the referee had difficulties controlling it, not dishing out a second yellow card to Wakaso for pulling Escudero down on a counter-attack.

The game seemed to be in Sevilla's hands but such a narrow lead is never certain. The minutes went by with Sevilla controlling the play and the decisive goal would arrive in a quick bit of play down the wing. Munir passed it into Ben Yedder in the centre of the pitch who found Sarabia running into the box. The midfield was composed and slotted the ball past Pacheco at his near post. André Silva would then come on to replace a hard-working Munir. The game calmed down and Sevilla held on to secure the clean sheet.

Although Sevilla could not manage the three points on Sunday, they are still very much alive in the fight for fourth and they have gained points on Getafe after their slip up in Cornellá. The goal now turns towards winning three points against Valladolid in Zorrilla, who after a strong start to the season now find themselves fighting to stay in the league. The two main full-backs, Navas and Escudero, will be suspended for the game, although this ought to mean they will arrive in full fitness for the Derby on Saturday.

First team
THE BANEGA FAMILY, WITH THOSE MOST IN NEED IN ROSARIO DURING THE PANDEMIC
Leer más
END_OF_DOCUMENT_TOKEN_TO_BE_REPLACED