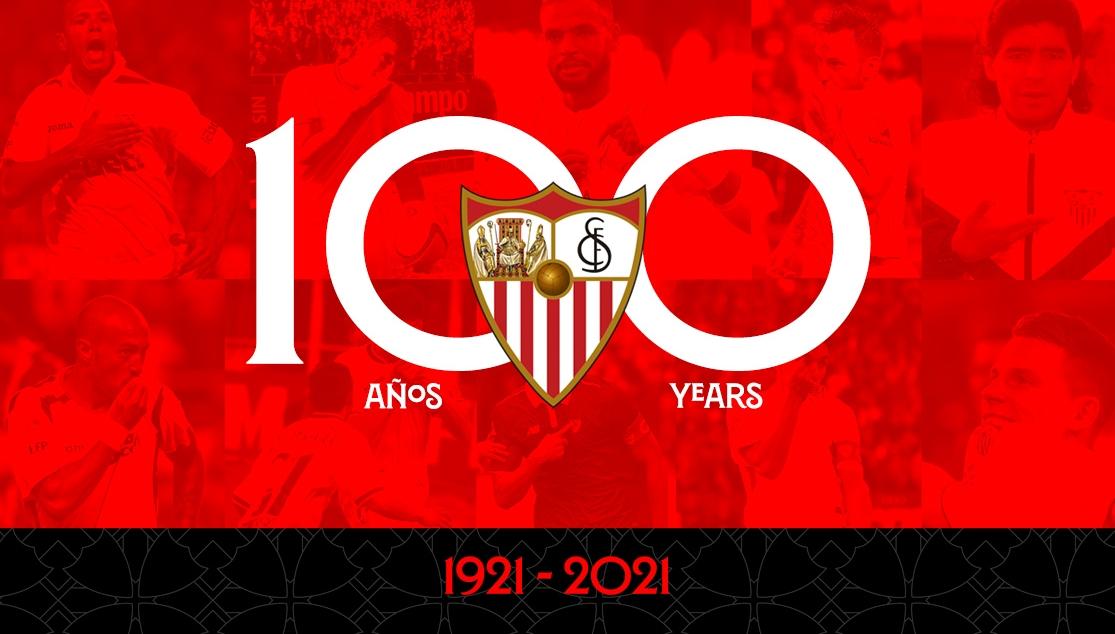 It was worn for the first time on 16th October 1921, in a match between Sevilla FC and Lisbon side Casa Pía Atlético Clube, at the Campo de Sports on the Avenida de la Reina Victoria in Seville

"More than my heart, my heart beats for your badge...". The phrase of the master García Barbeito is more present today than ever. The current Sevilla FC crest has now been used for one hundred years and the club wishes to remember its early history. Since then, the fans have always worn it with pride and as a unifying element of a passion called Sevilla FC. It's an emblem that makes the difference, and that makes the Sevillista unique from childhood "until death". A crest that has been defended on the pitch from Eizaguirre to Bono; from Spencer to Jesús Navas; from Guillermo Campanal to Biri Biri... A protective crest for which many have given their blood and their lives. Players, coaches, presidents, directors, Club employees, members, fans, supporters, all united for the badge with no other interest than the love for the passion they inherited.

A lot of rain has fallen since that 16th October 1921. Casa Pía Atlético Clube, champions of Lisbon, and Sevilla FC, champions of Andalusia, faced each other at the Campo de Sports on the Avenida de la Reina Victoria. Sevilla FC's starting XI consisted of Santizo, Sedeño, Herminio, Herminio, Barrero, Ocaña, Barragán, Escobar, Spencer, Kinké, León and Brand. Those eleven players had the privilege of wearing the new Sevilla badge on their chests for the first time. Despite the fact that Spencer was forced off early due to injury, Sevilla FC picked up a comfortable 3-0 win over the Lisbon side, with goals from León, Kinké and Escobar.

A few months earlier, the new board, led by Carlos Piñar and Pickman, had taken over the management of the club, giving it a new impetus and initiating the refurbishment of the stadium, with new stands, boxes and facilities making it one of the best in Spain, according to the press at the time. Those reforms were also inaugurated on that 16th October. A few days before, the flag with the new crest, a gift from the employees of Casa Peyré and members of Sevilla FC, was placed on display at an establishment on Calle Sierpes. The badge, the flag and the fans. Our current crest, now a hundred years old, was designed by Pablo Rodríguez Blanco, and it replaced the one previously created by the painter Juan Lafita, about which the artist himself said: "It is round: a circle, a kind of ball in the centre of which is interlaced, in red, the anagram of Sevilla Football Club".

Pablo Rodríguez Blanco was born on 11th June 1894 in Seville, at number 41 on Calle Santiago. At just 14 years of age, the orphan joined the Seville Waterworks Company Limited, a company closely linked to Sevilla FC from its beginnings, through Edward Farquharson Johnston, director of the company and first president of Sevilla FC in 1890. During these early years, Pablo combined his work with his studies in delineation, becoming part of the Technical Section of the SWW once he had completed his studies.

One of young Pablo's great passions, apart from drawing, was his deep love for Sevilla FC, to which he belonged as an active member for practically his entire life. In 1921, of his own accord, he decided to design a badge that would be more representative and more faithfully reflect the close ties between Sevilla FC and his city of birth. He told the story years later in an interview: "Without being commissioned by anyone - neither by the club, of which I was a member, nor by any close friend of the club - I designed the current one. I thought that the representative emblem lacked details. It needed to be completed. I added the official coat of arms of the city and the bars with the colours of the city, which were - and are - those of the club". After a lifetime of unwavering support for the club, Pablo Rodríguez Blanco passed away on 1st June 1979. Sevilla FC "was his life".

Since Pablo Rodríguez Blanco designed the crest in 1921, it has remained practically unchanged to the present day. The main modifications, although minor, came from the badge used by Santiago del Campo on the majestic mosaic above the main entrance to the Ramón Sánchez-Pizjuán Stadium. Inaugurated on 23rd April 1982, the colossal work of art features an enormous club badge, the main variations of which are as follows:

· The polychrome in the first quarter with Saints Ferdinand, Isidore and Leander.

· The change of colour in the emblem of the second quarter, changing the interlaced letters from red to black.

· Narrower and more elongated bars in the third quarter.

· The design of the ball.

The crest is based on the one designed in 1921 with its contents inspired by the coat of arms of Seville, from which it takes its saints Femando, Isidoro and Leandro; on the logo of the club's badge from the early 20th century; and on the white and red colours, which have always been the club's and the city's colours. From the heraldic point of view, it is a Swiss shield, divided in half and split. First, in silver, the patron saints, seated, in the manner of the coat of arms of the city. Second, in silver, the letters "S", "F" and "C", interlaced in sable. Third, in silver, five red stripes. Comble general angled with two red stripes, one for each quarter. Above the whole badge, a natural, antique football.

First team
LOPETEGUI: "WE ARE HOPEFUL IN THE CUP BUT WE KNOW THAT THERE ARE NOT SECOND CHANCES"
Leer más
END_OF_DOCUMENT_TOKEN_TO_BE_REPLACED