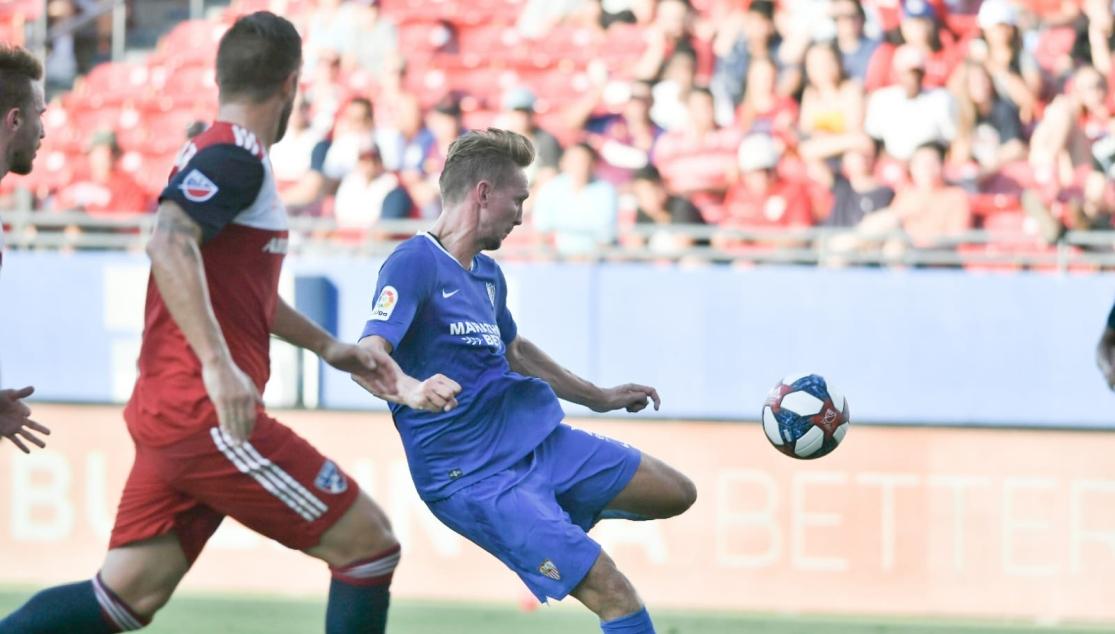 Goals from De Jong, Jordán and Nolito sealed the win

The second friendly of 19/20 preseason for Sevilla FC. After two days and training sessions in Dallas, the team measured its progress four days after facing Reading. This time, the Toyota Stadium and FC Dallas were waiting - the first of two games the Nervionenses will play on American soil. In a match that was dominated by Sevilla from beginning to end, one that left clear signs of how Lopetegui will look for his side to play, Sevilla secured a 1-3 win.

Sevilla took control of the ball practically from the first whistle, playing deep in opposition's half and getting most players involved in the passing game before creating opportunities. The first real chance of the game would come after ten minutes, when a good transition let Munir find Ocampos inside the area - the winger's effort was turned behind for a corner.

De Jong would score a spectacular first goal for Sevilla FC, giving the keeper no chance with a fine left-footed volley

Just as he had done against Reading, Julen Lopetegui took the chance to integrate every new member of the squad - this time, the new signings would leave their mark in the form of goals. After just over 20 minutes of action, new striker Luuk de Jong would find his first goal in a Sevilla shirt. Picking up the ball in Dallas' area with a number of defenders to beat, the Dutch hitman would flick the ball skilfully over an onrushing centre-back and volley first-time with his left-foot. Striking the ball as sweetly as he could, FC Dallas' keeper had no chance.

Sevilla would see no end to their clear domination, using the right and left flanks to create chances for the forwards. With everything under control for forty minutes, a touch of complacency would put Dallas back on level terms. After Banega lost the ball close to Vaclik's goal, Mosquera would dribble impressively at the Nervionenses' defence before unleashing a curling right-footed shot that left Vaclík no chance.

The second-half began with a new-look eleven, but with the same dominance that characterised the first forty-five minutes. Jordan and Oliver took the control of the center of the park - and it would be the first midfielder, with a fine strike from a direct free-kick - who would give Sevilla the advantage once again.

The win would be sealed in the last ten minutes of game - Nolito scoring in the 82nd minute to put the match beyond doubt. After Alejandro Pozo Pozo picked up a pass from Roque Mesa, his impressive run would open up space for the left-winger, whose shot would deflect past the outstretched reach of the Dallas goalkeeper. Though there would still be time to create chances for a fourth, Lopetegui's men would settle for the two goal cushion.

At the end of the match, as had been scheduled, a "third-half" was held between Sevilla FC and FC Dallas North Texas, the hosts' B team. Lopetegui once again changed his side, playing: Javi Díaz, Aleix Vidal, Gnagnon, Wöber, Arana, Jordán, Roque Mesa, Mena, Lara, Nolito and Ben Yedder. Juanpe, Dabbur and Pozo also had minutes. This third period ended with another victory (2-1) for Sevilla, after goals from Aleix Vidal and Munas Dabbur.

Sevilla FC will continue working on American soil and next Sunday morning will play their second match of the tour, in Boston, against Liverpool.