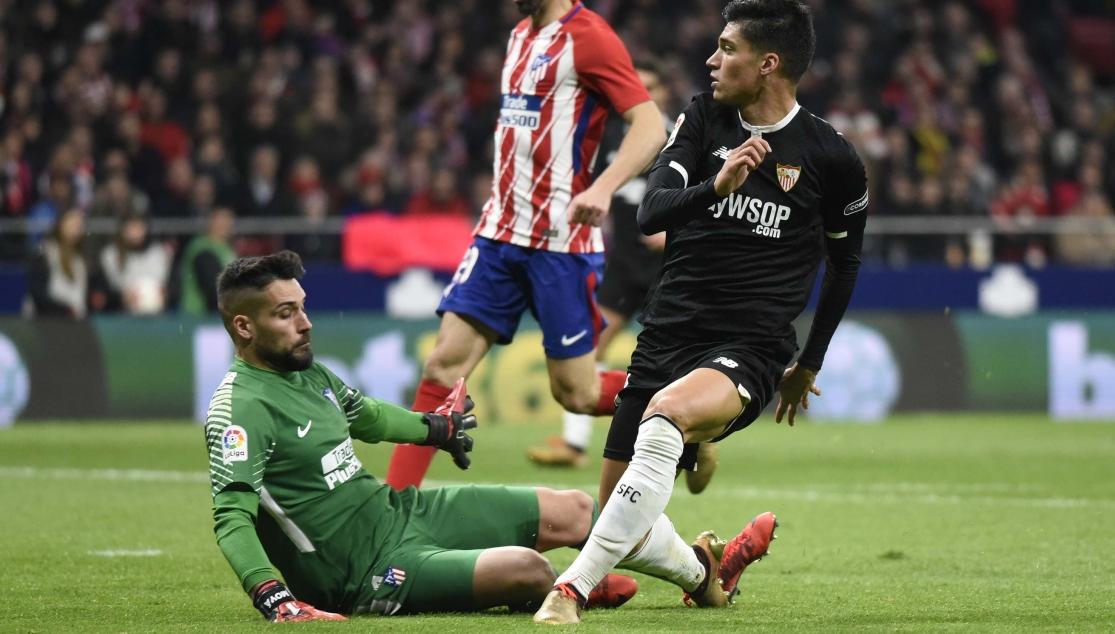 1-2: A DESERVED COMEBACK TO PUT SEVILLA ON TOP

Things looked bad coming in to the first-leg of the Copa del Rey quarter-final with Atlético Madrid, but a gutsy away performance and a well-earned comeback win has put Sevilla FC one step closer to the semi-finals and has put an end to a poor run of form. Though Sevilla may not have come in with too much to build on following the Nervionenses' latest fixtures, one of Sevilla's best performances of the season on one of the hardest stages secured a vital win which gives the side momentum for the second-leg of the quarter-final next Tuesday.

Football is never predictable. And for that reason it seemed almost appropriate that Sevilla FC conjured one of their bravest performances on the least likely of occasions. Plainly put, Vincenzo Montella's side did everything right. Though the hosts showed their strength, Sergio Rico was equal to any early effort - pulling off fantastic saves that kept the scores level. Despite the keeper's brilliance, it was Sevilla who had the clearer of the opportunities in the early going. Joaquín Correa was denied by the outstretched glove of Moya in the visitors' biggest chance of the first-half and Sergio Escudero nearly pulled off what would have been the goal of the season should his long-range effort not been denied again by the outstretched hand of the Atletico keeper. Though the hosts replied with chances of their own, it was Sevilla who had had the better first-half of the game when the break eventually came.

Sergio Rico and Moya both made magnificent saves to keep the scores level at half-time, though Sevilla boasted the clearer chances

After the restart, the game continued along the same back-and-forth pattern. Sevilla showed no signs of taking their feet off the accelerator and came out well, making the travelling fans truly believe an away win was on the cards. Bit by bit, as the game became more scrappy, Atletico grew into the game - taking advantage of corners and free-kicks to claw back some momentum. Twenty minutes from time, the home side would find a scrappy opener - scoring through Diego Costa after an attacking set piece saw the striker pick up space in the box and finish convincingly.

But even knowing that a 0-1 loss would keep Sevilla well within the tie, the Nervionenses showed little sign of accepting a close first-leg defeat. Navas replaced Vázquez, proving the side's positive intent. And it would be exactly Navas who would create a much deserved equaliser. Found in a dangerous position on the right, the Sevilla legend whipped a hopeful ball across the Atlético box. Finding a deflection, the speed of Navas' cross would prove too much for Moya, who, scrambling back, would palm the ball into his own net. With Sevilla back on level terms Atlético pushed forward and Montella smelt blood - replacing Muriel with Ben Yedder. Again it would prove a decisive change - with the Frenchman deftly slotting Joaquín Correa through just two minutes from time, and the Argentine making no mistake when flicking the ball past Moya to put Sevilla 1-2 up in the tie.

When all seemed lost in the first-leg, Sevilla grabbed a much-deserved equaliser

Correa's goal meant much more to the side than just a first-leg win, as would be proven by the team's celebrations. A month of poor results was at its end, and Sevilla were on the verge of a famous first win in the Wanda. The team would make no mistake in the dying minutes and would go on to secure a result that could be a turning point in the Nervionenses' season. An impressive and deserved win and a positive base for growth in Sevilla's 2018. 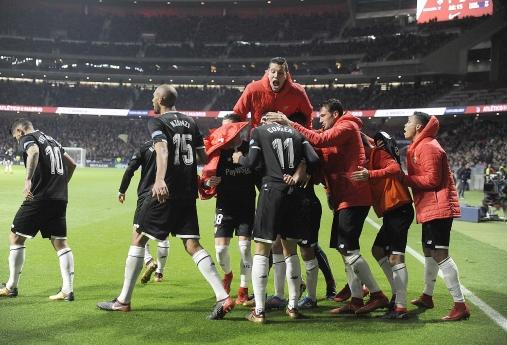