Number six. The circumstances didn't matter. Sevilla FC went to Germany and won their trophy, and will now have six UEL trophies on display at the Ramón Sánchez-Pizjuán 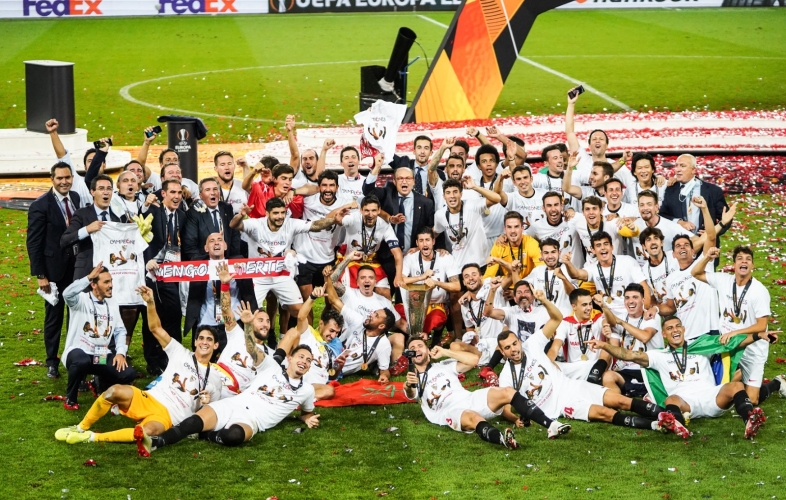 Again. Sevilla FC have picked up their sixth UEFA Europa League in a tense final. Sevilla, again, began competitvely and looked to take the game to their opponents. It did not start well, however, falling behind within five minutes, but a stunning brace from Luuk de Jong put the Nervionenses in front, before a Godin equaliser levelled the scores almost instantly. The second half was more tense, but the only goal came from an unbelievable Diego Carlos overhead kick, which was diverted in by Lukaku of all people! Another stunning performance from Bono, and Sevilla have won six UEFA Europa League trophies.

It was dejá vu for Sevilla inside the first five minutes. Again, the Nervionenses conceded a very early penalty, the opponent's first chance of the game. Lukaku got the better of Diego Carlos, but the Brazilian pulled him down inside the area. The striker took the penalty and beat Bono with a powerful penalty drilled into the bottom corner. Sevilla struggled immediately after the goal but recovered little by little and went for Inter. The equaliser also came early, inside fifteen minutes, with the Navas-De Jong combination surfacing again, with the Dutchman beating Handanovic with a diving header.

The first half was very open, with the scores level 2-2 at the break

Everything was going back to the beginning very soon and the game seemed to be calming down in a way. Inter, like United in the previous match, were betting on a two-legged game to take advantage of. Sevilla, on the other hand, felt more comfortable playing and using the flanks. However, they would go ahead with a set-piece, with a Banega free kick met at the far post by De Jong, with his sensational header looping over a despairing Handanovic. Unfortunately, the joy only lasted three minutes and it took Godin to level the tie with a header from a free kick.

Sevilla finished the first half on the front foot and nearly had a third, as Ocampos went close from another free kick. Handanovic diverted it wide but there was no time for the corner. Both teams decided that there was no need for such strong emotions and a much tighter match ensued in the second, although Inter remained determined to take advantage of any Sevilla mistakes. Luckily, there were very few of those, although Inter clearly had theirs.

The biggest mistake came from Lukaku, as he missed a one-on-one chance against Bono, who denied him well. Another chance was cleared off the line by Koundé. The stage was then set for the winner. An acrobatic overhead kick from Diego Carlos took a wicked deflection off Lukaku and spun into the goal. Sevilla led with fifteen minutes of normal time to play.

Those minutes were tense and it was time to dig deep, but the tension was more down to the time remaining, not the danger that Inter posed. Conte made changes, throwing on Moses, Eriksen and Alexis Sánchez as they sought a late equaliser, but the six minutes of added time was not enough to stop the Nervionenses winning their sixth Europa League. What a team! What a joy for a city that is now happier than ever for their team. Jesús Navas finally got to lift a trophy, in an unforgettable year for the wrong reasons, but now there is a positive. Get in Sevilla!