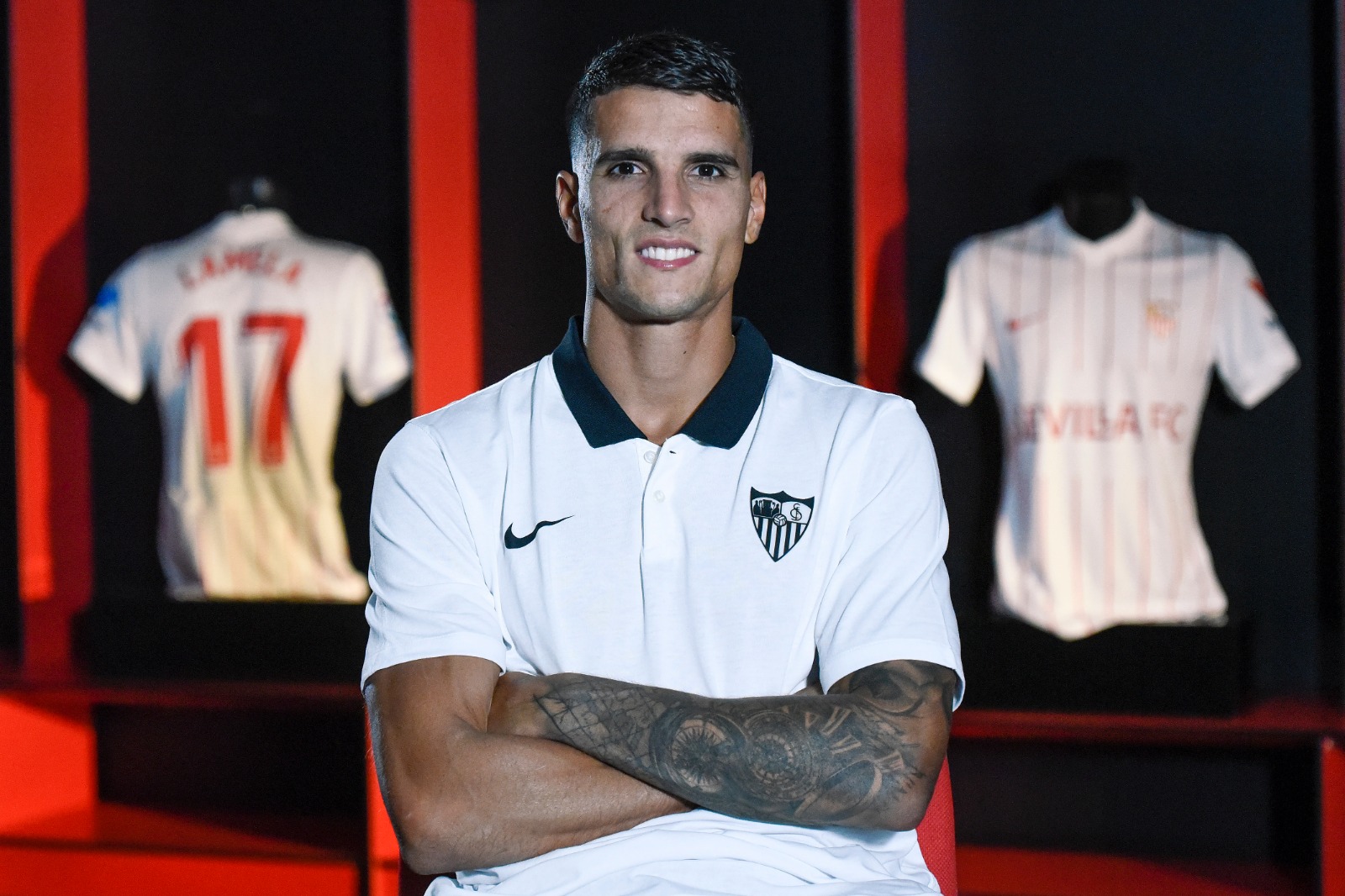 ERIK LAMELA: 'IT IS AN EXCITING TIME FOR THE CLUB, I CAN'T WAIT TO BE A PART OF IT.'

Entradilla
Lamela declares his ambition to be successful with the club: 'I want the club to continue winning titles. I would love to be a part of the club's history'

Erik Lamela, who has just signed for the club, shared his first thoughts as a Sevillista with the club's media. In his first interview, the Argentine didn't shy away from his amazement at seeing the Ramón Sánchez-Pizjuán stadium: 'It's the first time that I've been here, I've never played here before. The stadium is incredible. I took some official photos there. I'm delighted to be here.'

The Argentine did not hide his delight at signing for the club, something that could've happened a few seasons ago: 'I had the opportunity to come here when I was younger, but I'm over the moon that I'm finally here. I'm delighted with the opportunity. I had teammates who spoke to me and I didn't hesitate to join for a second.'

In addition, Erik Lamela also discussed his delight at joining the Spanish league. : 'I really wanted to play in La Liga before retiring. I still have a lot left to give, and the opportunity right now is very exciting for me. Sevilla is a huge club which has won several titles. I'm over the moon. I'm going to give it my all to try and help the team in any way that I can.'

'It is an exciting time for the club, I can't wait to get started'

Lamela is very committed to helping the team in any way possible: "I always try and give my best to help the team, be it in attack or in defence. Helping the team as much as possible so that we can achieve the results that the team wants. I see myself more as an attacking threat, but I have no problem with defending should the team require me to do so. I like to compete and ultimately, to win game, you have to do a bit of both. As I said previously, I will give it my all.

The new Sevilla player emphasised his versatility in different attacking positions: 'Over the years I have changed positions several times. I've essentially played in every attacking role. I am more comfortable on the right or in the middle. Being a left-footer means that I can finish with my left foot quite easily. But essentially it depends on what the team needs. The coach will be the person who decides this.'

Lamela spoke of his confidence upon his arrival at the club: 'I'm very confident. I'm sure I will have a great season. I hope it's the case, it'll help the team. Sevilla FC have a great squad and that'll make things easier. I'm really excited. First I need to get into training and adapt myself to the needs of the squad. Little by little I'll get my match fitness and I'll be ready to compete.' Lamela also spoke about the importance of getting to know the club before his arrival: 'I spoke with Reguilón a lot. Ever since his arrival to England he spoke wonders about the club. I knew that was the case - I know many Argentines who played here and they all speak well of the club. Fede Fazio, Perotti... I already knew it was a great club.'

'I am sure I will have a great season'

He starts his new spell in Seville with defined goals: 'The club has been winning many titles recently, that's really positive. I came here to continue that streak, to help the team in any way I can. We are all together. That's my goals: to keep winning titles and to keep the club growing. To make the step up in the Champions League. I have many personal goals but I prefer to speak about the team.'

Monchi's confidence was key throughout: 'I met him and he seemed great. He welcomed me in and made me feel comfortable. Not just here, he made me feel comfortable even through the phone. I liked that a lot.' Before finishing, he promised he would give it his all right from the first minute: 'I hope to show the fans quickly what I'm capable of. I don't know what animal you could compare me to but I will fight like a lion!'

As a last point, he spoke about the club's anthem and making history here: 'I would love to win titles with the club. To make history with them. That is one of the main objectives.'