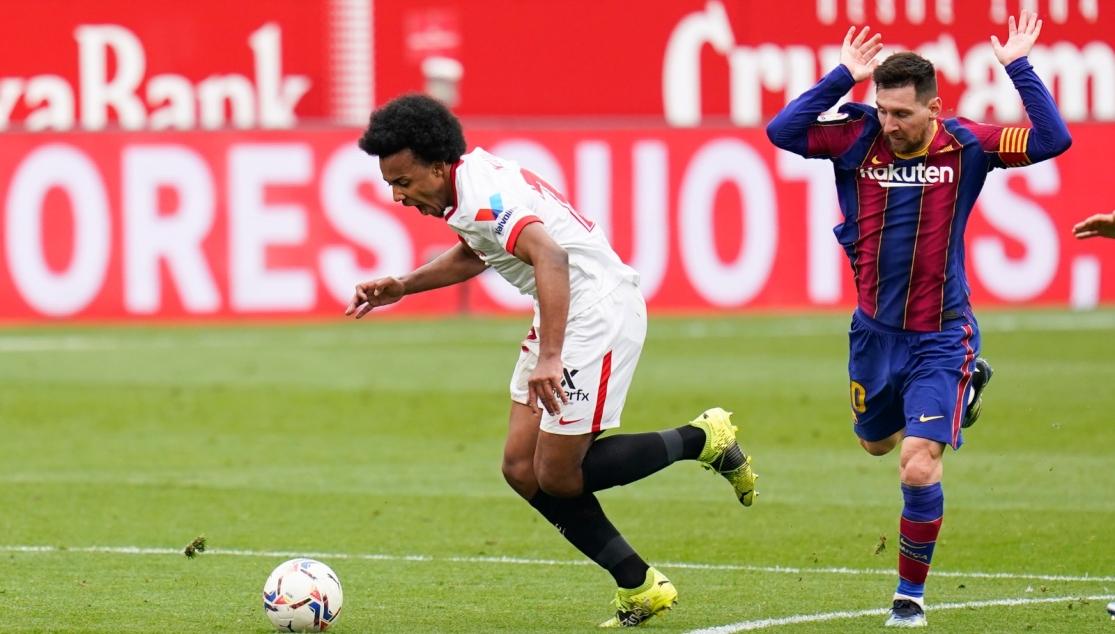 0-2: A DEFEAT IN THE FIRST OF TWO VITAL CLASHES

A tough defeat for Sevilla FC this Saturday afternoon in the first of two matches this week against FC Barcelona. Julen Lopetegui's men failed to score for the first team since the defeat at Atlético Madrid on 12 January, and lost their six-game winning streak with Dembelé's goal in the first half and Messi's in the second. The win opens up some distance between Barcelona and Sevilla.

No team wanted to risk too much at the start and the first fifteen minutes went by without much action, with the two teams sizing each other up and not allowing any attacks. Ter Stegen, who managed to start after injuring his hand in the warm-up, had barely any work in a first half in which Barcelona were the better team, using Dembelé's pace as their principal weapon. The French winger had the first shot of the first half when he cut inside on his left foot and shot at Bono. Two minutes later, from a free-kick, Messi tried to surprise Bono but the Moroccan was quick to react to the Argentine's effort.

After a tight start to the game, Dembelé broke free and put Barcelona in the lead

Sevilla opted for a patient game focused on not losing the ball, but they would see themselves fall behind just before the half-hour mark. Lenglet played in into Messi who slid the ball in between the two centre-halves to Dembelé and the French winger made no mistake in the one-on-one with Bono, tucking it under him with his left foot, the first goal Bono had conceded in six games. It was a blow for Sevilla who were not offering much attacking threat and they would again come under threat when Dest fired the ball against the post. Controversy would erupt minutes later when Messi, after picking up a booking for a harsh tackle on Fernando, pulled Koundé back but no second yellow was brandished. Instead, Hernández Hernández opted to book Lopetegui for protesting the decision.

Lopetegui wasted no time at the break and made three changes. Rekik, Suso and En-Nesyri came on as the team changed to three at the back, two strikers with Suso playing as a ten. The first chance for Sevilla would come soon after when Jesús Navas cut inside and fired in a shot when everyone expected a cross. Shortly after, En-Nesyri tried his luck. With sixty minutes gone, Barcelona could have ended the game when Dest struck the post and Messi fired over when Bono was out of position after good work from Dembelé.

Sevilla improved after the break but struggled to worry Ter Stegen

Lopetegui used up his two remaining changes by bringing on Óscar and Óliver. Sevilla began to play more in Barcelona's half, but struggled to worry Ter Stegen. En-Nesyri had the ball in the net but the goal was ruled out after the ball had ricocheted onto his hand. The bad luck would continue for Sevilla as Messi broke through and scored after three ricochets - one off Fernando and two from Bono - leaving him with an open net.

Sevilla's winning and clean sheet run is brought to an end and they will have to quickly recover for Wednesday's decisive Cup semi-final at the Camp Nou. Today's result allows Barcelona to pull further away from Sevilla in the league and the team will have to await the results of other fixtures to see what distance they can maintain between fifth place.