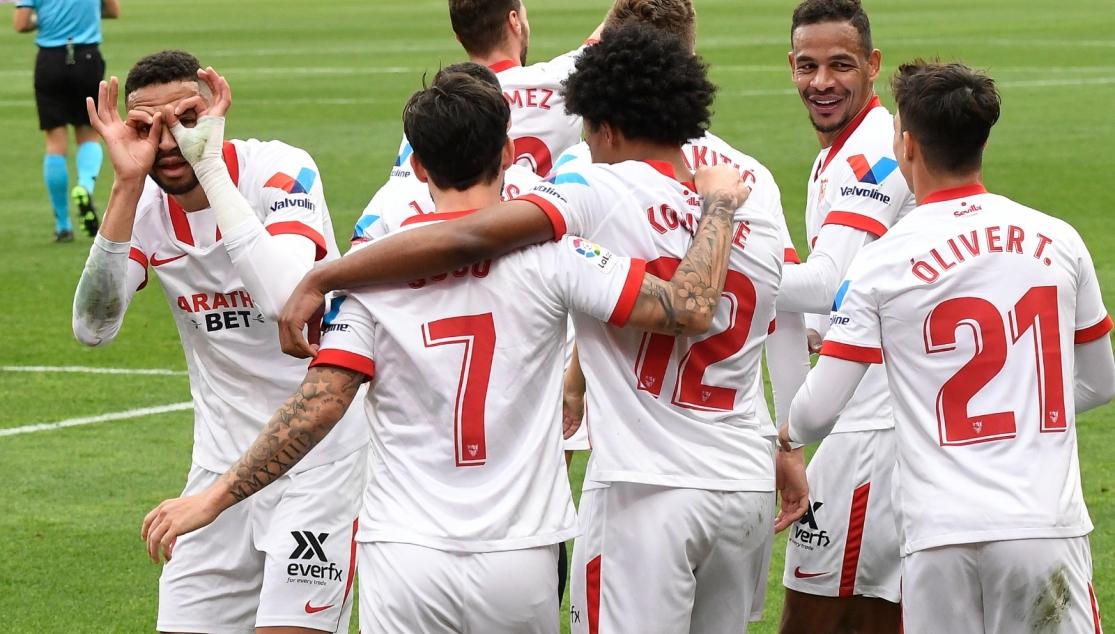 3-0: SEVILLA FC TAKE HOME THREE POINTS AFTER AN INCREDIBLE EXHIBITION FROM THE TEAM AND EN-NESYRI

The Moroccan takes home his second match ball of the season just matches after doing so against Real Sociedad. Sevilla dominated Cádiz, who only managed to threaten with the game all but over

A convincing, impressive, and dominant win for Sevilla FC this afternoon against Cádiz CF at the Ramón Sánchez-Pizjuán. Youssef En-Nesyri stood out once more, scoring his second hat-trick in two weeks after his first against Real Sociedad. After a shot from Suso hit the post, En-Nesyri was there to score the rebound. His second came from Suso again, with a clever delivery into the box from a free-kick. And he wrapped up the hat-trick in relentless style, capitalising on a defensive mistake and scoring a powerful header. The hat-trick puts En-Nesyri as La Liga top scorer with 12, moving above Lionel Messi and Luis Suárez. With the three points, Sevilla move into third place in the league with 36 points.

Sevilla completely dominated the first half, controlling possession (81%-29%) and the game in general, both offensively and defensively, and that was reflected in the scoreboard. Ocampos sent a shot over Ledesma's goal in the ninth minute after a good cut-back from Jesús Navas who had broken down the right wing and into Cádiz' box. Minutes later, En-Nesyri would have the chance to open the scoring after a good combination with Suso; however, for once, the Moroccan would not hit the target, sending an acrobatic effort inches wide of the post. Koundé, in the 33rd minute, met the ball from a Jesús Navas corner but his header lacked the power to go beyond the goalkeeper.

Suso placed a wonderful free-kick right on En-Nesyri's head, setting the Moroccan up for his second of the afternoon, just minutes after his first

With Sevilla full of confidence and positioned high in Cádiz' half, the goal was always sure to come. And come it did. Suso and En-Nesyri, who arrived at the Club last January, made sure an excellent first half performance would not go to waste. Suso, a threat both down the right wing and in between the lines, thumped a left-footed strike against the post which rebounded to En-Nesyri who made no mistake, sending the ball past Ledesma and opening the scoring at the Ramón Sánchez-Pizjuán. Immediately after, En-Nesyri would win a free-kick that Suso sent perfectly into the penalty spot where the Moroccan was waiting to head home his second. En-Nesyri equalled Suárez and Messi as the top scorer with the goal, and he would not stop there.

The second half started in the same manner as the game had been going, with the Blanquirrojos in complete control in Cádiz' half and creating danger with swift attacks and down both wings. And it was down the wing that, just after the 60th minute, En-Nesyri would secure his second match ball in two weeks, a true testament to the incredible form the striker is currently in. The Moroccan was first to a bad clearance in Cádiz' area, beating out Alcalá, and fired a header past Ledesma for his hat-trick. On top of his game, En-Nesyri had the ball in the back of the net moments later, and only VAR could stop him with an offside call that had millimetres in it.

Cádiz, with the game all but over, began to go on the attack to secure a consolation goal. Negredo had two chances, sending one over the bar and another just wide of Bono's right-hand post, while Perea also caused some danger. Both managers began to rotate with fifteen minutes to go and the game over, looking to give rest to the starting eleven. Just before coming off, Jesús Navas and En-Nesyri switched roles and the Spaniard almost fired home a pass from the Moroccan. Idrissi also had a chance late on after coming off the bench.