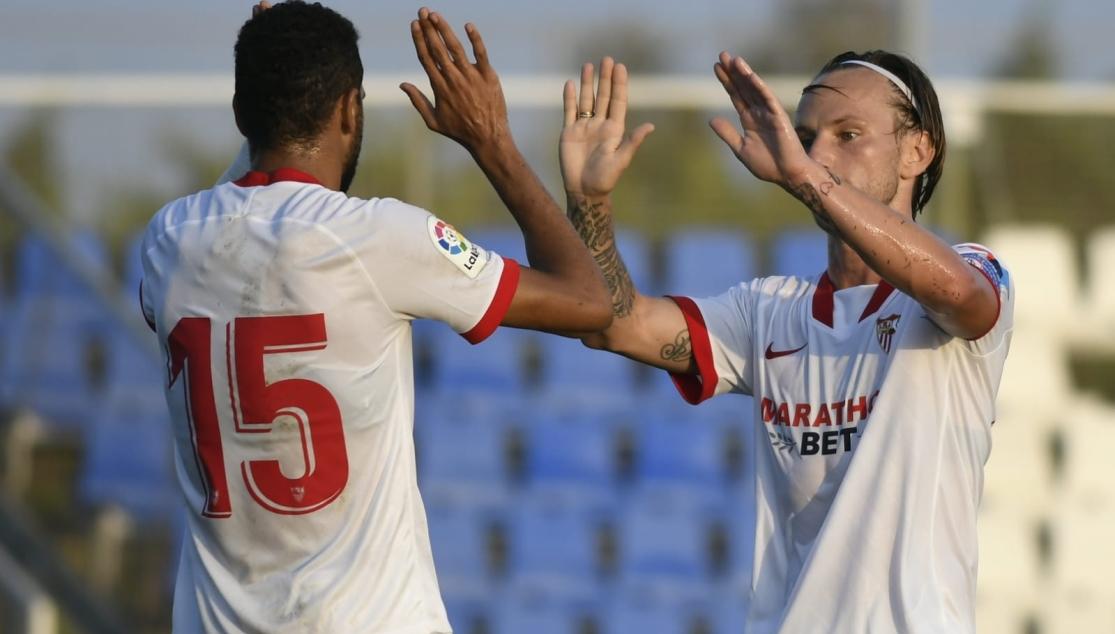 3-2: A SECOND HALF COMEBACK SECURES A WIN IN THE FIRST MATCH OF PRE-SEASON

Lopetegui used two completely different sides in both halves, with the exception of Koundé, who started the match and played in the second half

The 2020/21 season is now underway for Sevilla FC. Today's friendly against Levante UD, at the Pinatar Arena in San Pedro del Pinatar, was an unusual affair, with two halves of 55 minutes. The Nervionenses trailed 2-0 at the break, but stormed back in the second half to win 3-2, with goals from Ocampos, En-Nesyri and Rakitic.

In the first half of the first pre-season match, Sevilla FC wanted to keep Levante UD trapped in their half, which is exactly what they did. They dominated possession and tried to break away down the right hand side, with Suso and Jesús Navas featuring heavily. However, the Granotas were the ones to break the deadlock, shaking off the pressure from Sevilla. A goal apiece from Postigo and Dani Gómez meant that the Nervionenses' dominance was not reflected on the scoreboard.

The first of those goals came after a quarter of an hour, with an unmarked Postigo heading home from a free kick, leaving Vaclík well beaten. Ten minutes later, Dani Gómez broke the Sevilla offside trap, which was effectively on the half way line, and he doubled Levante's lead from the resulting one-on-one chance. Lopetegui's men, despite their territorial dominance, were unable to craft any chances that troubled Koke Vegas, apart from one Óliver chance which was deflected wide for a corner, after a lovely solo move from Carlos Fernández.

The second half, however, could not have started any better for the Blanquirrojos. Barely four minutes into the half, and a whole host of substitutions, Ocampos drilled home from distance, beating Koke for sheer power. Just seconds before, Koke had had to be at his very best, spectacularly tipping away a header from his own teammate Manzanara. Sevilla FC did not stop, with Rakitic going close soon after.

Lopetegui changed his side for the second half, who blocked Levante and created more chances

With a new formation at the Pinatar Arena, Lopetegui's men continued to seek for an equaliser, whilst denying Paco López's side any opportunity to play football. The equaliser followed. A wonderful long ball from Jordán from the right back position played En-Nesyri clean through on goal, who only had to decide where he wanted to place the ball after Jordán released him. The Moroccan chose to place it low to Koke Vegas's right, comfortably beating him. Sevilla FC were level.

As the clock continued to tick down, the Nervionenses were comfortable on the pitch, maturing into the game and continuing to dominate both the possession and play. Pozo turned in a strong performance on the right hand flank, and there was a clear understanding between new signings Óscar and Rakitic in the midfield. It was indeed Rakitic, with the number 10 on his back, who stole clear at the front post to head Jordán's bouncing corner beyond Cárdenas to complete the comeback and secure a win, and also a second assist for the Catalan midfielder. En-Nesyri nearly slid in De Jong for a fourth, but his pass eluded the Dutch striker.