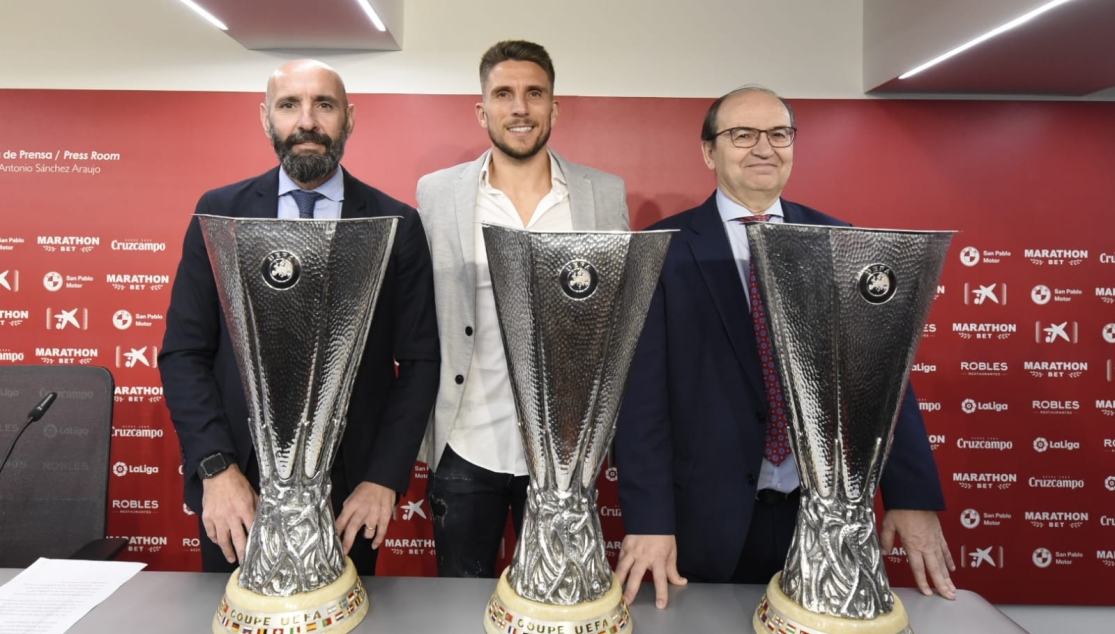 "Any time we've lifted silverware it has been because of the togetherness within the team, the staff and the fans. Right now we can achieve all that we want to"

It was an extremely emotional day for Daniel Carriço and everyone connected with Sevilla FC. The now ex-Sevilla captain and leader said goodbye infront of the media in the press room at the Ramón Sánchez-Pizjuán, and had the three Europa League trophies that he has lifted on the table with him. With him were the entire coaching staff, the captains of the squad and some teammates such as Franco Vázquez, Nolito, Vaclík, Sergi Gómez and Javi Díaz. After both the President and Monchi spoke, it was his turn to give a speech: "Before starting I would like to continue on from what Monchi said. Any time we've lifted silverware it has been because of the togetherness within in the team, the staff and the fans. Right now we can achieve all that we want to. We're in a good position in La Liga and more than alive in the European competition that has brought us so much glory. The key is the togetherness and I think that a fantastic season can be achieved. There's no other means of winning trophies and if we all pull in the same direction, we're going to be very happy whenever the season is over".

After this, he read from the script that he had prepared: "Today is a difficult day for me and my family. After six and a half seasons, the moment for me to leave has come. I'm leaving behind what I consider to be my home and my family; and I'm leaving to move to another country to continue enjoying my football, but not before thanking everyone and remembering all that I have experienced here. It's impossible to express my feelings every time I think about pulling on this shirt. Here, I've had unique and once-in-a-lifetime moments. I will never forget my debut and those European triumphs that have put this club where it belongs. I've also overcome more difficult moments because here, nobody gives up. I've no doubt that here I've had my best years as a footballer".

Carriço continued by thanking different people: "I want to thank Monchi for allowing me to play here, for putting his trust in me and allowing me to live out this dream. I would also like to thank the President for the treatment and the unconditional support. To the Del Nido family, for teaching me about the passion and the Sevillista values. I'll never forget the board and the people around the club. I thank all of my coaches here, from Unai to Lopetegui for helping me grow and trusting me. To my teammates, thank you for always supporting me, making me a better footballer and a better person. For the battles that we have fought with that togetherness that will bring us to glory one more time. To the medical staff and the kitmen, thank you for everything you do for us. Thank you to my friends Dani and Martagón for being there for me and the affection. To the press department, thank you for your way of handling situatios and respect; to Jesús Gómes and all of his team".

And obviously, he signed off by speaking directly to the fans: "To the fans, thank you for the respect and the affection because I always saw how my dedication and effort was recognised. Without you, none of this would have been possible. I ask you to continue supporting and in this last stretch of the campaign, trust that this team can achieve great things. Lastly, thank you to my wife and my kids, who have been by my side in the good and especially the hard times. Here, I've won trophies and gained recognition as a footballer; but nothing can be compared to the feeling that people want you and them wishing you the best. It has been a honour to wear these colours and this badge. There will always be a place in my heart for Sevilla FC and Seville. I'm leaving as one of you because even though I wasn't born a Sevillista, I will die as one".